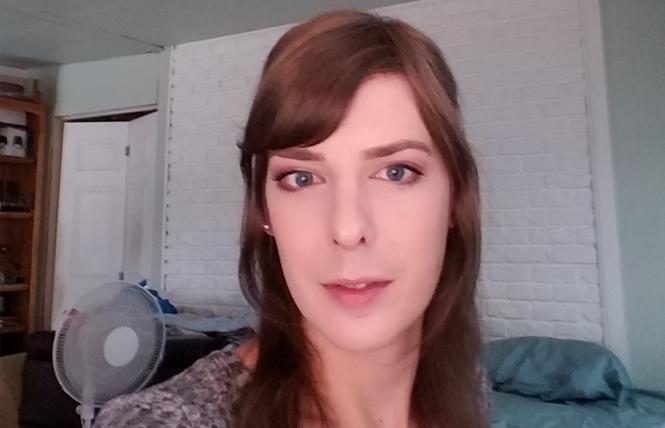 A three-judge panel of the California Court of Appeal for the 5th District heard December 15 the case of a transgender woman who is appealing a judgment against her in a discrimination and harassment lawsuit she filed against Starbucks.

As the Bay Area Reporter previously reported, Madison Wade, 31, sued Starbucks in 2018. According to the complaint filed in Fresno County Superior Court, Wade alleged that after she came out as transgender, her manager began a campaign of harassment and discrimination against her that ultimately led to her changing branch locations and resigning from the company after nine years of employment.

The judge entered summary judgment in favor of the defendants in 2019, which was appealed to the appellate court in 2020.

"We have reviewed this matter and are very familiar with all the facts," Justice Brad R. Hill said at the outset of the afternoon virtual hearing. "Please keep that in mind."

Nako went into what she alleges are the facts of the case: that Wade had already been working for Starbucks for many years when, in 2017, she informed her manager, Dustin Guthrie, about her desire to transition.

But after coming out, Wade's hours were cut and she was moved from "reliable morning shifts to unreliable afternoon and evening shifts." Guthrie would only refer to her with a male name and masculine pronouns, according to a copy of the initial civil complaint.

"Sensing and concluding that the situation with Guthrie would only deteriorate, [Wade] was forced to seek a transfer to another location," the initial civil complaint stated.

Justice M. Bruce Smith interrupted Nako's reading of events to say that Wade did not give these as reasons for leaving in her deposition.

"Judge Smith — you had a question about the reasons for termination Ms. Wade gave," Kennedy said. "The reasons Ms. Wade gave for why she resigned had nothing to do with the 'environment' she claimed was a hostile work environment."

Kennedy said that "when I had Ms. Wade in a deposition, I'd asked her for all of the reasons" for her resignation, and they weren't related to the alleged discrimination.

"The employer must do something so intolerable a reasonable person would be forced to leave," Kennedy said. "There's clear evidence there is no severe or pervasive conduct. Her issue with Dustin Guthrie was the use of correct pronouns. ... According to Ms. Wade, she asked people to use the right pronouns but if they didn't it's no big deal."

"Starbucks is prohibited by law from controlling off-duty conduct," Kennedy said. "Whatever one does outside of work, and doesn't reach back into the workplace — Starbucks can do nothing about that."

Kennedy said that a goodbye party held for Wade when she left for the new location illustrates that Wade and her co-workers got along.

"Only Wade's hours were cut," Nako said. "That was recognized by the trial court. ... Without explanation, it concluded that there was no connection between that and her protected characteristic. ... Ms. Wade testified it started about six weeks after she informed Mr. Guthrie that she was transgender and it continued until she left Starbucks. Starbucks had no contradictory testimony."

Nako said that the social media posts can count toward determining discriminatory intent before a jury.

"There are multiple cases identifying comments not directed at the plaintiff and away from her presence considered by courts to be direct evidence of discriminatory intent," Nako said. "Many are from the [federal] 9th Circuit."

Nako said that correct pronoun and name usage was not a matter of using "magic" words.

"It is not at all correct that her request was equivocal," Nako said. "She was very, very clear she did not want to be called by a male name or pronoun. ... Ms. Wade repeated the same request to her co-workers and they all managed to make that adjustment successfully."

"I don't believe it would have been a difficult transition for him," Nako said. "It was the lawful and appropriate thing to do."

Nako alleged Guthrie never once referred to Wade by female pronouns or as Maddie, and said she went to the goodbye party to see other co-workers and avoided Guthrie.

Hill said the panel would take the case under submission.

Judge rules against trans barista in Starbucks suit
Sign up!