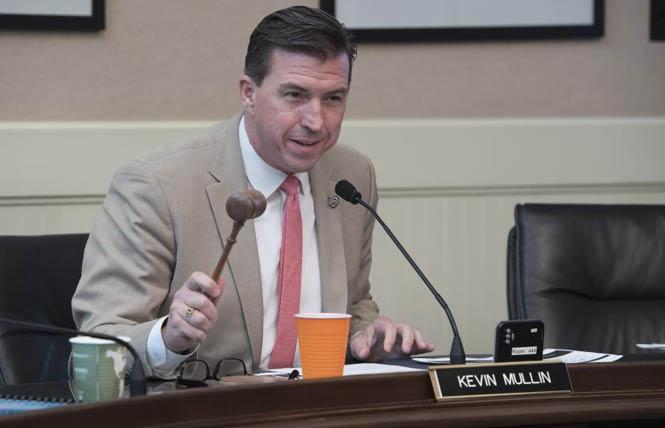 Peninsula Assemblymember Kevin Mullin has secured endorsements from several of his colleagues for his congressional bid to replace Jackie Speier, for whom he once worked. Photo: Courtesy Peninsula Clean Energy

A number of his out colleagues he has served with in the California Legislature are backing Assemblymember Kevin Mullin (D-South San Francisco) as he seeks a rare open Bay Area U.S. House seat in 2022. While its exact boundary will change due to the redistricting process underway and likely receive a new number, the Peninsula-based district is expected to continue to include parts of southern San Francisco.

Currently known as the state's 14th Congressional District, it has been held since 2008 by Congressmember Jackie Speier (D-San Mateo/San Francisco). But she announced last month that she would depart Washington, D.C. at the end of her current term, setting up a scramble among San Mateo County elected leaders to succeed her on Capitol Hill in 2023.

Mullin, 51, had served as Speier's district director when she served in the state Senate in Sacramento. He also had been the political director for his father, former Assemblymember Gene Mullin, who died in April at the age of 83 following a diagnosis years earlier of cancer.

The San Mateo County native served on the South San Francisco City Council where he continues to live with his wife, Jessica Stanfill Mullin, and their twin sons Liam and Landon. He won election to his 22nd Assembly District seat in 2012 and is the lower chamber's speaker pro tempore this legislative session.

In launching his congressional campaign in mid-November, Mullin announced a slew of endorsements from both state and county leaders. Among them was gay state Senator Scott Wiener (D-San Francisco), who could have made a run for the open House seat. His 11th Senate District as currently drawn includes parts of Speier's district, and while he isn't a resident of it, House candidates are not required to live in the district they seek to represent.

But Wiener is widely expected to run for the seat currently held by House Speaker Nancy Pelosi (D-San Francisco) when she retires. Speculation continues to swirl if this is Pelosi's last term in Congress, yet to date she has given no indication that she won't run again in 2022.

"Kevin is a strong progressive leader and ally to the LGBTQ community. He's been a fantastic and thoughtful colleague in the Legislature, and I know he'll do great things in Congress," Wiener told the Bay Area Reporter as for why he decided to endorse Mullin in the contest.

"Today, more than ever we need leaders like Kevin Mullin in Washington to ensure our San Mateo communities and families get the support they need from the federal government. That's why I am enthusiastically endorsing Kevin in his race for Congress," Gordon stated in a December 1 announcement released by Mullin's campaign. "I know Kevin personally to be a dedicated public servant and a skilled, detail-oriented legislator with a bold vision for Congress to protect our democracy and make lives better here at home for our neighbors."

Mullin stated he was "humbled and honored" to have backing from both Hill and Gordon, as when he served alongside them in Sacramento, "I watched and learned about dignity and integrity from working shoulder-to-shoulder with Jerry and Rich. They are trailblazers who stood up for what was right no matter the personal cost. They know how I will fight as hard in Washington as they did in Sacramento to help Peninsula families and small businesses recover from the pandemic, continue to protect our democracy and voting rights, take on the sky-high cost of housing in our communities, and fight climate change to leave a healthier planet for future generations."

Other candidates
Also seeking the open House seat is San Mateo County Board of Supervisors President David J. Canepa. Of Mexican and Italian heritage, he also grew up in San Mateo County and served on the Daly City council.

He continues to live there with his wife, Ana, the consul general of El Salvador for Northern California, and their son, David Piero. Canepa this month released his own list of local leaders backing his House bid, among them San Francisco Supervisor Myrna Melgar, whose District 7 seat is currently within Speier's House district.

"Throughout his career in local leadership, David has been a proponent of accessible health care, affordable housing, environmental protections, public transit, and educational opportunities, especially for historically marginalized communities," stated Melgar, the mother of a lesbian daughter. "Further, his leadership throughout the COVID-19 crisis solidifies that he is the right person at the right time to bring the Bay Area's hardworking, progressive values to Washington, D.C."

In announcing Melgar's support of his candidacy, Canepa noted she is "a leader who works tirelessly day in and day out to improve the quality of life of all people in San Francisco. I look forward to continuing to work with her to build a more equitable, affordable, and eco-friendly Bay Area and United States."

Last week, Burlingame City Councilmember Emily Beach also officially launched her campaign for Speier's House seat. She first moved to Burlingame with her family in 2008 and won election to her council seat in 2015.

A native of western Massachusetts, Beach attended the University of Notre Dame on an ROTC scholarship before enlisting in the U.S. Army where she served as a captain in Saudi Arabia, South Korea, and Texas. Her husband, attorney David "Duff" Beach, is also an Army veteran.

The couple moved to the Bay Area in 2000 with their two children and lived in San Francisco. Emily Beach initially worked in Silicon Valley as a business executive prior to becoming a philanthropist then an elected leader; her husband is a special counsel with the San Francisco-based law firm Coblentz Patch Duffy & Bass LLP.

"As a mother of two teenagers, I understand what it takes to go to work every day, fight for pay equity in my work, manage a household, and meet a family budget in one of the most expensive regions of the country," stated Beach. "I'm no stranger to hard work and tackling tough challenges, and I am motivated like never before to make a difference for everyone."

She, too, jumped into the race with the support of a number of her fellow elected municipal leaders on the Peninsula, including the current mayors of Los Gatos, Marico Sayoc, and Atherton, Elizabeth Lewis. San Carlos Councilmember Ron Collins, a former public school teacher, is also supporting her in the race.

"Emily Beach is intelligent, experienced, disciplined, and compassionate. She does her homework, is a good listener, fearless, and always prepared," stated Collins. "She'll make an excellent member of Congress and I'm proud to support her."

The top two vote-getters among the candidates who do qualify for the primary election next June will compete in the November general election. The winner will face reelection in 2024.