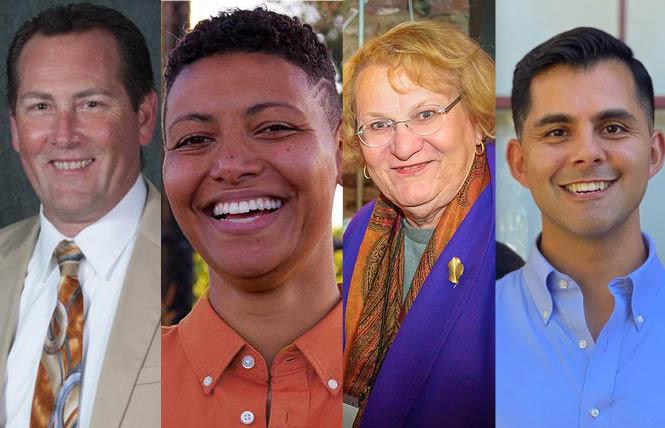 A quartet of out candidates in California in recent weeks has racked up significant support for their historic 2022 bids, while the state's first bisexual Assembly member, Alex Lee, has rolled out an impressive list of endorsers as he fights to keep his South Bay seat.

Gay candidates Ken Carlson, vying to be the first out Contra Costa County supervisor, Jennifer Esteen, seeking to be the state's first Black LGBTQ legislator, and Lisa Middleton, aiming to be the first transgender member of the state Legislature, have all secured significant support for their candidacies in recent weeks. Gay veteran Joseph C. Rocha has also garnered key endorsers for his bid to be the first out Latino member of Congress from the Golden State and only the third elected from California.

Carlson, a gay retired Concord police sergeant who serves on the Pleasant Hill City Council, is looking to follow in the footsteps of his grandfather James Moriarty, a county supervisor in the 1970s. He is seeking the board's District 4 seat, as incumbent Supervisor Karen Mitchoff announced in 2019 she would not run for reelection in 2022.

The district currently spans the cities of Concord, Pleasant Hill, Clayton, and parts of Walnut Creek. Carlson has called Contra Costa County home for over 50 years and resides in Pleasant Hill with his husband, Jeremy.

Lining up behind Carlson in the race is gay El Cerrito Mayor Pro Tem Gabriel Quinto and the vice mayors of Pleasant Hill, Michael Harris, and Danville, Newell Arnerich. Also endorsing Carlson for the seat are mayors Tim McGallian of Concord; Sue Noack of Pleasant Hill; Kevin Wilk of Walnut Creek; Rob Schroder of Martinez; Amy Worth of Orinda; Paul Fadelli of El Cerrito; and Chris Kelley of Hercules.

"On the Board of Supervisors, I'll work to deliver real solutions to housing, help Contra Costa County recover from the pandemic, and build a more sustainable future for all of us," stated Carlson, a former board president for the Rainbow Community Center in Concord.

In Alameda County gay nurse and union leader Esteen continues to rack up high-profile endorsements in her bid for the East Bay's 20th Assembly District seat. It remains to be seen, however, if she will be running against Assemblyman Bill Quirk (D-Hayward), who lives in a Union City retirement community with his wife.

Based on the preliminary maps released last week by the state's redistricting commission, it appears Esteen's unincorporated community of Ashland will remain a part of much of Quirk's current district. It would continue to be grouped with Castro Valley, Hayward, San Lorenzo, Sunol, and parts of Union City, but newly combined with Pleasanton and Livermore.

Lindsay Bubar, a spokeswoman for Esteen's campaign, told the B.A.R. that Esteen and Quirk are in the same Assembly district based on the preliminary maps.

"We are aware that community members in the unincorporated area do not think that these lines adequately account for their needs, and those folks will be advocating for changes before the commission," noted Bubar. "It is our sincere hope that the commission seriously evaluates their concerns and make the changes needed to create districts where all voices are heard and all communities have the opportunity to elect the representation they deserve."

The new district's boundary in Union City would be along Alvarado Niles Road, with the western areas of the city and Fremont part of a new district that would also include Newark, Milpitas, North San Jose and Berryessa area, the north East Foothills and Alum Rock. Those areas are currently part of Lee's 25th Assembly district, and could mean Democratic Fremont City Councilwoman Teresa Keng would find herself having to run against him, which seems unlikely.

Like Esteen, Keng launched a campaign this summer expecting to run for Quirk's seat and has endorsed Lee's reelection campaign. The rest of Lee's current district of Sunnyvale, Cupertino, and Santa Clara would be grouped into a new one incorporating North San Jose, Mountain View and Saratoga based on the preliminary maps, which are likely to change between now and January.

A host of LGBTQ and progressive Democratic leaders have thrown their support behind Esteen. The list includes Tiffany Woods, a transgender woman who is co-chair of the state party's LGBTQ caucus; Alexis Villalobos, a gay man who ran against Quirk last year; and Brandon Harami, a gay man who is vice chair of the state party's progressive caucus. Gay former state legislators Assemblyman Tom Ammiano and Senator Mark Leno, both of San Francisco, have also endorsed Esteen, who like Leno is Jewish.

"As someone who faced many challenges, hardships, and unfair treatment due to my identity, I am excited to announce my endorsement for Jennifer Esteen, who I know will be an amazing member of the California State Assembly," stated Ammiano. "As a nurse, a mom, and a proud gay woman, I know that Jennifer will do everything she can to care for all communities in California."

Added Leno, "I look forward to the days when Jennifer is in the halls of power bringing her voice, the voices of her constituents, and the voices of all of those who have been traditionally left behind."

South Bay race
Lee is fending off a challenge from his predecessor in the Assembly seat, Kansen Chu, who opted not to seek reelection in 2020 and went on to lose his bid for a Santa Clara County supervisor seat. It appears the two will remain in the same Assembly district next year, based on the preliminary maps.

Also on the list is Hayward Mayor Pro Tempore Aisha Wahab, who is running next year as state Senator Bob Wieckowski's (D-Fremont) choice to succeed him in Sacramento. He also endorsed Lee.

"It's a testament to how far our movement has come, and I'm excited to keep fighting," stated Lee.

The LGBTQ Victory Fund, which works to elect out candidates across the country, and Equality California, the statewide LGBTQ advocacy organization, jointly announced their early support for Middleton in October. All of Middleton's fellow council colleagues — bisexual Palm Springs Mayor Christy Holstege, who is running for the 42nd Assembly District seat next year; gay City Councilmen Geoff Kors and Dennis Woods; and straight City Councilwoman Grace Elena Garner — have endorsed her Senate bid.

"Lisa is deeply knowledgeable about the issues impacting our region and will bring innovative solutions to the legislature to fight for our fair share of resources and tackle California's biggest challenges, from enhancing transportation networks to college affordability to job creation, access to affordable healthcare and more," stated Holstege. "I'm proud to endorse her campaign for SD-28 and look forward to hopefully working with her in the state Legislature."

Also backing Middleton is Riverside County Board of Education member Elizabeth Romero, who lost to Melendez in the special election held last year. The seat had become vacant due to Jeff Stone, a Republican from La Quinta, resigning to join the Trump administration.

"I've seen Lisa in action firsthand, and I can personally attest to her deep commitment to improving the lives of the people she serves," stated Romero. "I know Lisa will fight for the 28th District's fair share in Sacramento and be a strong ally for our communities, advancing a common-sense agenda that lifts up all working families - from helping to enhance transportation systems to combating climate change to ensuring our economy works for everyone. I'm with her 100%."

In San Diego County Rocha has garnered significant support from fellow Democrats as he aims to oust Republican Congressman Darrell Issa from his suburban 50th Congressional District seat northeast of San Diego. It could become even more Democratic following the redistricting process, giving Rocha an edge.

"Joseph's leadership as an LGBTQ+ advocate during 'Don't Ask, Don't Tell' repeal allowed me to fulfill my dream of becoming a Marine Corps officer," stated Goldbeck. "I know that he will bring that same leadership to Congress, and I am proud to support his campaign."

In announcing her support of Rocha, Kehoe noted that he "has served his country as both a sailor and a Marine, and has served his community as an LGBTQ+ advocate. I know that he will continue that service in Congress with the honor and dignity that this district deserves."

Esteen, Lee, Rocha, and Middleton, along with Holstege, will all be running on the June primary ballot with the hope of being one of the top two vote-getters, regardless of party affiliation, to move on to the November general election. As for Carlson, he could clinch a victory on the June ballot if he secures more than 50% of the vote; otherwise the top two vote-getters in the race will face off on the November ballot for the supervisor seat.