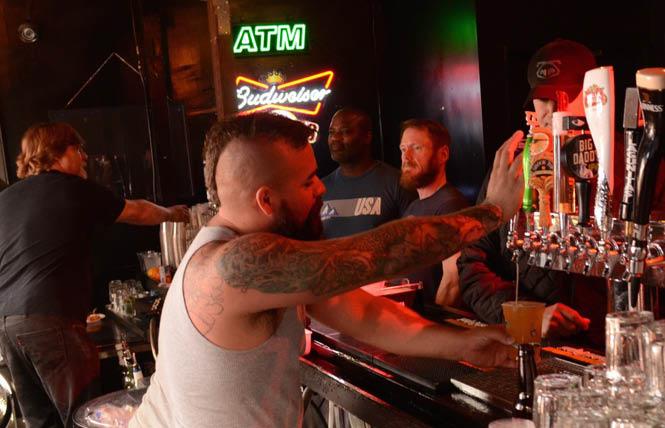 A bartender pours a drink at a beer bust at the Eagle bar in 2015. Photo: Steven Underhill

Befitting for October being LGBTQ History Month San Francisco supervisors have granted city landmark status to the first local site related to leather history. At its meeting October 19, the Board of Supervisors finalized granting the designation to the gay-owned Eagle bar.

It is the second leather bar in the U.S. of the same name to become a local landmark. The unanimous vote by the supervisors during their meeting had been expected, as they had granted preliminary approval for landmarking the South of Market establishment two weeks ago, as the Bay Area Reporter previously reported.

Because city landmarks are granted via an ordinance, the supervisors needed to vote a second time to make the Eagle landmark official. It is now the city's third gay bar location to be landmarked and the eighth property in San Francisco with ties to LGBTQ history to be designated a city landmark.

Atlanta officials christened their Eagle bar, which opened in 1987, a city landmark in December 2020. San Francisco's Eagle bar, under different ownership than that of its East Coast counterpart, first opened in February 1981 at 396-398 12th Street at Harrison in the SOMA neighborhood.

The area had earned the nickname of the "Miracle Mile" due to the numerous businesses catering to the LGBTQ community on Folsom and Harrison streets in the 1970s and 1980s. While that part of western SOMA is now part of the Leather and LGBTQ Cultural District, the Eagle is one of the few leather bars remaining and is the first LGBTQ landmark to be located in the district.

The bar was shuttered for two years between April 2011 and March 2013 when Lex Montiel and his late business partner Mike Leon took over the ownership and management of the bar. Montiel supported landmarking the Eagle, which is best known for its Sunday beer bust fundraisers on its outdoor patio.

District 6 Supervisor Matt Haney, who represents the area, instigated the landmark process for the bar last year shortly after the roughly 5,153 square foot, irregularly-shaped rectangular lot where it is situated was put up for sale. The property has yet to sell.

"The SF Eagle is one of the few remaining Leather bars in this area and holds great significance for the LGBT community, LGBT history, and, indeed, the history of San Francisco," Haney said earlier this month in requesting his colleague's support for the landmark ordinance.

The two other LGBTQ bar sites listed as city landmarks are the Twin Peaks Tavern in the Castro LGBTQ district at 401 Castro Street and the former Paper Doll restaurant and bar site at 524 Union Street in North Beach. The former home to the AIDS Memorial Quilt on upper Market Street in the Castro and the late gay supervisor Harvey Milk's residence and former Castro Camera shop at 573 Castro Street are also city landmarks.

In June, the Noe Valley home of the late lesbian pioneering couple Phyllis Lyon and Del Martin became an official city landmark. The Lyon-Martin House at 651 Duncan Street is the first LGBTQ historic site in the city in a purely residential area.

The Japanese YWCA/Issei Women's Building at 1830 Sutter Street in Japantown was also added to the list of city landmarks during Pride Month. The Japantown Y site was where the pioneering gay rights group the Mattachine Society hosted its first convention in May 1954, and the late gay African American civil rights leader Bayard Rustin taught at one time.

The other city landmark with ties to LGBTQ history is the Women's Building at 3543 18th Street in the Mission. A group of women that included a number of lesbian leaders founded it in 1971 and moved into the current location in 1979, where numerous meetings of LGBT groups and conferences have taken place over the years.