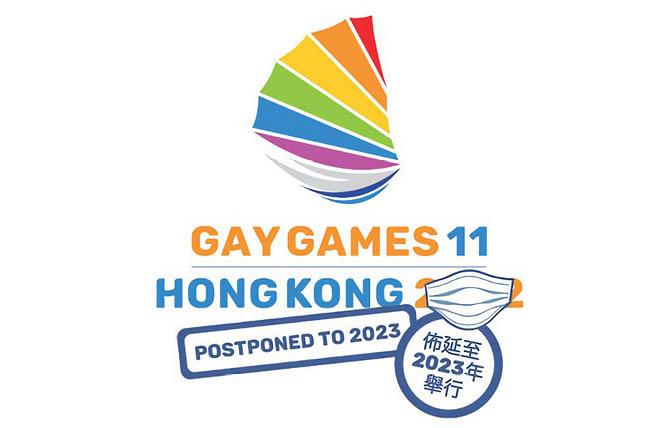 Organizers of the 2022 Gay Games in Hong Kong have announced the event will be postponed for a year. Photo: Courtesy GGHK

Gay Games organizers announced late Tuesday evening the event would be postponed one year for the first time in its 40-year history.

Gay Games XI, which was scheduled to be held in Hong Kong in November 2022, is being postponed to 2023 because of COVID-19 pandemic concerns regarding travel restrictions, inability of athletes to train adequately in their chosen disciplines, ever-changing lockdowns, and lack of adequate vaccination in many parts of the globe.

"Throughout the pandemic we've been developing contingency plans with a consulting organization, reviewed on a monthly basis," Dennis Philipse, co-chair of Gay Games Hong Kong, told the Bay Area Reporter. "In the last two months in the U.S. and Europe with the Delta [variant], and also in Asia and Australia, we decided it didn't look like things were going to get better in the next couple of months. We don't want to have people excluded because they are not vaccinated or don't have enough time to prepare."

Two months from now would have been one year out from the scheduled start of the Gay Games. Registration had already been delayed by more than a year in hopes international travel restrictions would have been eased and stronger, sustainable control of the pandemic would be seen on the horizon late this year.

Instead, many parts of the world have had minimal access to vaccinations; surges in cases and deaths keep recurring globally; and lockdowns and travel restrictions remain commonplace. This not only affects the ability of athletes and teams to make travel plans, it means that in many cases their ability to train for the sports events have been compromised or eliminated. (See August 25 JockTalk, "The uncertainty of it all.")

"We want to make sure that everyone is able to come to the event," Philipse told Hong Kong Free Press. "We cannot be in a bubble event, people cannot be in quarantine for 21 days."

Sean Fitzgerald, co-president of the Federation of Gay Games, the licensing entity for the Gay Games, said, "The FGG stands behind Hong Kong's decision to postpone the games and will continue to work with the GGHK team and our member organizations to ensure that our event in November 2023 delivers on meeting our core aims of participation, inclusion and personal best to the widest possible attendance from Asia and internationally."

Philipse told the B.A.R. that organizers made the announcement as early as they did so sports clubs could make alternative competition plans for the year.

"We decided the earlier we can make this decision the better," Philipse said. "If you tell (sports groups) too late they will not be happy. We want to let them look at alternative competition events."

GGHK has publicly projected a turnout of 12,000 participants, which would have been almost impossible to achieve under current circumstances but may be more doable by 2023. So far 1,540 individuals have paid small non-refundable fees to pre-register. Philipse said those deposits will be credited toward registrations for 2023.

Commitment remains
Philipse said sponsors and volunteers remain committed to the event and that organizers had the support of FGG in making the decision. The FGG will hold its annual meeting in November in the United Kingdom to select a host city for the 2026 Gay Games XII. Philipse said organizers would focus the next two months on developing their status report for the meeting, including identifying specific dates for the competition.

The FGG announced the decision to Gay Games stakeholders early Wednesday morning in its newsletter. In the newsletter, Philipse said recent criticism of the Gay Games by some Hong Kong politicians did not play into the decision to postpone the event. He stated that instead, the criticism had increased the resolve of GGHK volunteers and three local lawmakers were quoted as supporting the postponement and staging of the event.

The newsletter also provided a somewhat confusing quote from GGHK Co-Chair Lisa Lam that provided a perspective that transcends the Gay Games mission of personal empowerment.

"All of us involved, envision a world without competing political ideologies, without national borders, without tribalism," Lam said.

It was not clear whether Lam was speaking about GGHK organizers and volunteers, or for Gay Games supporters and past participants. There has never been a survey of Gay Games stakeholders that has polled them on whether they envision a world without competing ideologies, borders, or tribalism.

Lam continued, "There are massive problems ahead of the human race, too overwhelming for any single nation or ideology to solve, so only through unity can we overcome them together. The word 'gay' in our name is an anachronism, a reminder of past decades when LGBTQ minorities were fighting a different beast. Today, our aim is to unite and celebrate diversity, whether you are straight or belong to a minority."

The Gay Games have always sought to bring participants together regardless of sexual orientation, gender identity, or expression to fight against every form of discrimination — the same "beasts" they are fighting today.

Some athletes welcomed news of the delayed games.
"From an athlete's viewpoint the decision to postpone the Gay Games until 2023 is a positive one, as it gives them more time to prepare and make key decisions about their travel arrangements — especially those who would have been traveling long distances to Asia from Europe and the United States of America," said Chris Morgan, a Gay Games ambassador and meet director for the LGBT International Powerlifting Championships. "The return of powerlifting to Gay Games will sadly be delayed for one year, however, we are looking forward to hosting the first powerlifting championship within Gay Games since 2014."