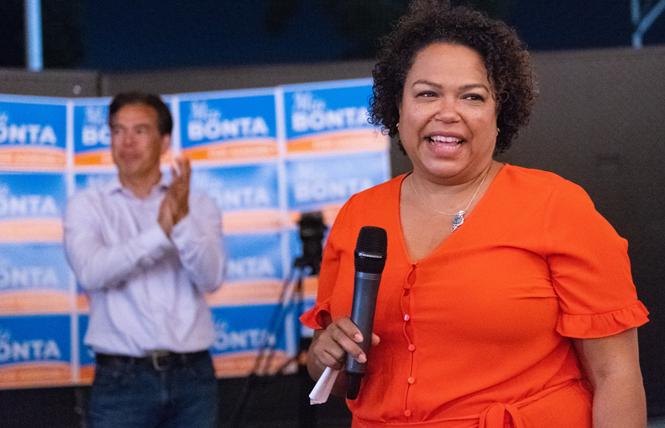 Mia Bonta is leading in the race to succeed her husband in the state Legislature. Waiting for additional ballots to be counted in the August 31 runoff race for the East Bay's 18th Assembly District seat is Janani Ramachandran, who would be the first queer legislator should she win.

Mia Bonta, 49, a Black Latina, was seen as the frontrunner in the race, with a bevy of Democratic Party leaders and special interest groups lining up to endorse her and fund her campaign. She easily took first place Tuesday night with 55% of the vote, according to the unofficial returns, for a total of 25,712 votes.

Ramachandran, 29, a social justice attorney who also identifies as lesbian, received 21,103 votes for 45% of the total ballots counted so far based on the preliminary results Wednesday morning. The Alameda County registrar of voters has yet to announce how many ballots are left to count and will post an update online before 5 p.m. Thursday.

"Running a corporate-free campaign is not easy but y'all made it so much simpler through your activism, dedication & willingness to challenge business as usual. So tonight we are celebrating YOU," Ramachandran tweeted Tuesday night.

The East Bay Times solely endorsed Ramachandran, as did the Bay Area Reporter. Statewide LGBTQ advocacy organization Equality California endorsed both Ramachandran and Bonta, with one of them set to become the fifth female member of the Bay Area's legislative delegation.

Whoever wins is expected to be quickly sworn into office and will need to run next year for a full two-year term.