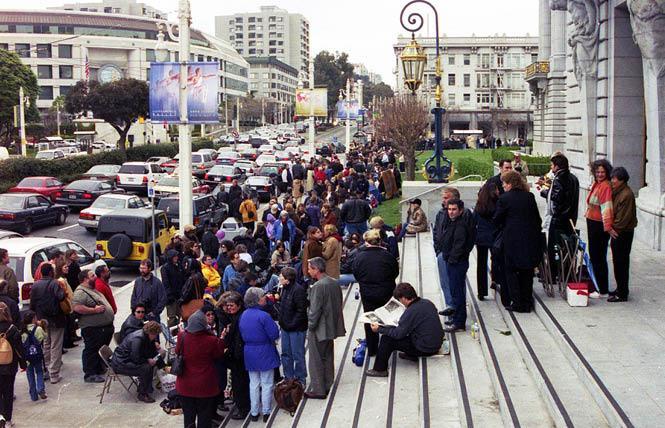 In a final statement of decision, a San Francisco Superior Court judge ratified his earlier ruling that one of the parties to a 2004 marriage at San Francisco City Hall between two lesbians that had been declared null and void by the state nonetheless qualifies as a "putative" spouse.

Judge Victor M. Hwang had ruled tentatively June 25 that because Cynthia Hernandez "had a good faith subjective belief that her marriage was valid" from 2004 to 2020, she qualifies as a putative spouse.

To be a putative spouse under state law, one part of a couple must have had a good faith belief their marriage was valid. It does not necessarily have to be a reasonable belief, Hwang's decision states. According to Valerie F. Horn, an attorney for respondent June King, this doctrine is normally used in situations relating to common law marriages (that is, those not solemnized) in which one of the partners has died.

Hwang confirmed this ruling in a final statement of decision filed July 23 after having reviewed objections.

Horn told the Bay Area Reporter that the rest of the case between Hernandez and her client will be handled by family law attorney Deborah Schoenberg.

"After there is a final judgment, the client intends to appeal," Horn stated, referring to the ongoing case over community property and spousal support.

Horn stated appellate counsel would argue the case if it is appealed.

Schoenberg did not respond to an immediate request for comment.

The court battle between Hernandez and King came about after Hernandez filed for a dissolution of marriage in early 2020, which Horn said was with hopes of getting community property and spousal support. The two lived together until 2019.

Kathleen L. Morgan, the attorney who is representing Hernandez, told the B.A.R. that the putative spouse issue had to be decided before the community property and spousal support issues could be considered.

"The trial on the putative spouse is complete," Morgan said. "Because of the finding she's a putative spouse, we can move on to the more difficult process of determining distribution of assets."

Morgan was pleased with Hwang's ruling on behalf of her client.

"We're very happy with Judge Hwang's decision," Morgan said. "We believe it is a correct decision and it basically confirms what my client is claiming — that she believes she was legally married in 2004."

These marriages were not re-instituted when the state legalized same-sex marriage again briefly in 2008 — before the passage of Proposition 8, California's same-sex marriage ban — or when in 2013 the United States Supreme Court upheld an appellate court's ruling that Prop 8 was unconstitutional.

It is unclear what Hwang's ruling may mean for other same-sex couples who were married during the "Winter of Love."

As the B.A.R. previously reported, Horn believes the effects of Hwang's ruling could be far-reaching, as someone could (under the line of argument followed in the court's opinion) claim part of someone's estate as a putative spouse from a marriage invalidated in 2004, or get up to 50% of that person's community property if they are alive.

Attorney Amy Harrington, in a news release following Hwang's tentative ruling, agreed with Horn that it "creates incredible chaos for the 8,000-plus people who have relied on the [state] Supreme Court's ruling from 2004. It opens the floodgates for former partners to assert community property claims 20 years after they were notified that their marriages were nullified and void from their inception."

Correction, 8/17/21: The original version of this story mischaracterized a statement from Valerie Horn, one of June King's attorneys, as saying that she will probably be appellate counsel if the case is appealed. Horn stated that "it probably will be appellate counsel" who will argue the appeal.