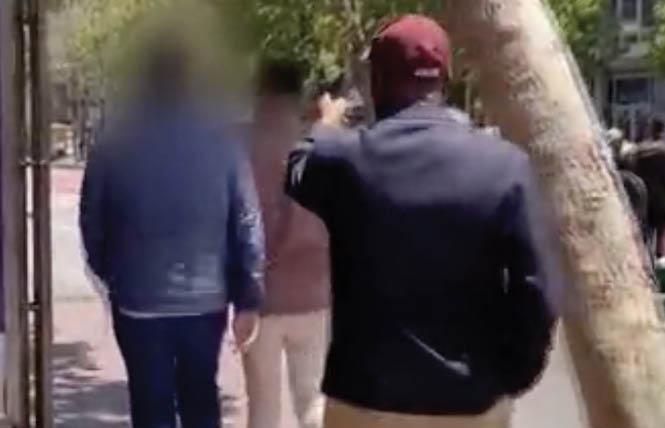 In this scene from a viral video, a man pointed at a gay biracial couple as he reportedly went on a racist rant against the men. Photo: Courtesy KTVU

A gay couple of which one of the men is Asian American and a same-sex female couple in San Francisco were recently the victims of a racist rant caught on video and a robbery, respectively, in two separate incidents.

On July 18, two cellphone videos were captured showing a racist tirade against a biracial gay couple downtown. One of the men, who have not been publicly identified, is Asian.

The incident happened in the area around Market and Seventh streets, according to KTVU-TV (https://www.ktvu.com/news/mans-racist-tirade-against-gay-couple-in-san-francisco-captured-on-cellphone-video), around 3 p.m. that day.

"I don't like you fucking Asian motherfucker in my country!" an unidentified man yelled at the couple. He later said, "Your mother was worthless because she didn't abort your sorry ass."

A bystander, Darren Mark Stallcup, captured one of the videos. The Asian man who was being accosted captured another once the couple had sought safety in a nearby hotel.

The couple called 911, KTVU reports, and police are investigating.

Stallcup and the SFPD have not responded to requests for comment by press time.

Michael Nguyen, the chair of the GLBTQ+ Asian Pacific Alliance, stated to the B.A.R. that he is not surprised, considering the increasing amount of anti-Asian sentiment that California Attorney General Rob Bonta described as part of an "epidemic of hate."

"While I am deeply disheartened and saddened by the tirade, I am not surprised by it," Nguyen stated. "Asian Americans have been made the perpetual foreigners for many centuries now, and these verbal assaults have always been happening. We just have more video evidence of them happening now with the advent of social media.

"I hope that the couple reaches out to the community for support and that we all take care of each other. We can only change hearts and minds one at a time through the hard work of organizing and cross-movement solidarity," he continued.


Woman attacked in garage
Days earlier, a San Francisco woman was attacked in her garage during a July 14 burglary. She is raising money for a new garage door and control unit.

Remia Reyes, 71, told KGO-TV (https://abc7news.com/san-francisco-sf-woman-strangled-crime-armed-robbery/10904328/) on July 22 that she is considering leaving the city. Subsequently, however, she has raised $1,395 out of a $3,000 goal on GoFundMe (https://www.gofundme.com/f/help-me-change-my-garage-door) to buy a door for her Oceanview neighborhood home.

"Everytime I see it I'm having [an] anxiety attack due to the attack that happens to me inside my garage," the GoFundMe states. "Also our garage door control was taken and I'm afraid that one of [these] days it will just open up using the missing garage door control. Please help me raise enough money to replace my garage door."

Reyes told KGO-TV that she was unloading groceries when one of two suspects put her in a chokehold and carried her through her garage. Reyes said she offered money to the suspects, but only after telling them that her brother has a gun and calling for her domestic partner, Solita Magsalin, did the two leave.

Reyes and the San Francisco Police Department have not responded to requests for comment, however the SFPD's daily crime log for the day shows that the incident, labeled a "hot prowl burglary," occurred around 1:30 p.m. and that the two suspects (who were both estimated to be between 20-25 years old, and who were driving a sedan) demanded money.

"Whoever did this to me, please don't anymore," Reyes said. "My God!"

District 11 Supervisor Ahsha Safaí connected the incident to other crimes committed against the Asian community both nationwide and in the Bay Area.

"This is a horrifying crime that plays into neighbors' concerns that people of Asian descent are being targeted for robberies and property crime," he stated to the B.A.R. "We need to do everything we can to protect our seniors and most vulnerable."

David Campos, a gay man who is chief of staff to District Attorney Chesa Boudin, wouldn't answer what the DA's office would do if the police find the perpetrators; though, he did want to assure the LGBTQ community that the top prosecutor is looking out for them.

"With respect to your inquiry, we cannot comment on specific cases," Campos stated. "But we want the LGBTQ community [to know] that we are always monitoring any possible hate crime against the community. We take such crimes very seriously and are prepared to take the steps necessary to protect the community."


Updated, 7/26/21: This article has been updated with comments from GAPA and Supervisor Safaí.

Updated, 7/28/21 This article has been updated with comments from the DA's office.