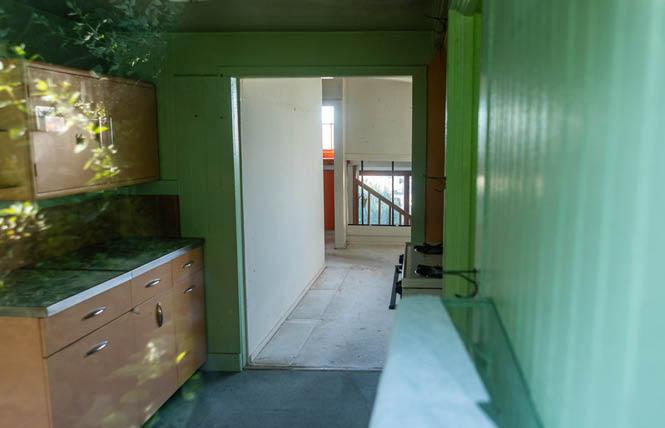 The kitchen of the Lyon-Martin House is shown through a window; the site officially became a city landmark June 21. Photo: Art Bodner

Two historic sites in San Francisco tied to LGBTQ history are now officially city landmarks. The newest to the list, landmark No. 292, is the Lyon-Martin House.

Altogether there are now seven city landmarks that are historically significant to the LGBTQ community. In late May the Japanese YWCA/Issei Women's Building in Japantown became landmark No. 291. 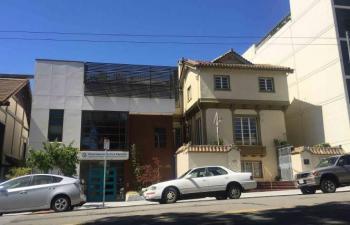 The Julia Morgan-designed wood frame structure at 1830 Sutter Street was where the pioneering gay rights group the Mattachine Society hosted its first convention in May 1954. Bayard Rustin, the late gay African American civil rights leader, also taught a course at the site.

Its current owner, the Nihonmachi Little Friends, had pushed for the property to become a local landmark. It is the first property tied to the city's Japanese American community to receive city, state, and national landmark designations.

Gay District 8 Supervisor Rafael Mandelman, who represents Noe Valley, had instigated the landmarking of the Lyon-Martin House last year at the urging of historic preservationists and LGBTQ community leaders after the property was bought by a straight couple with intentions to build a home for their family at the site. In exchange of their pledging to protect the women's cottage, Mandelman did not include in the landmark request the vacant garden area of the property where Paul McKeown and his wife, Meredith Jones-McKeown, plan to build their new house.

What is to become of the Lyon-Martin House remains to be seen. Due to it being located in a residential area on a steep hill, it is likely unsuitable to be opened as a museum accessible to the public. One idea that has been floated is to use it for an artist-in-residence type program.

Journalists who first met in Seattle in 1952, Lyon and Martin helped launch the influential Daughters of Bilitis, the first political and social organization for lesbians in the United States. They purchased the San Francisco property in 1955 and used it as a gathering place for the city's lesbian community and the site of various meetings and events.

Their home now joins the late gay supervisor Harvey Milk's residence and former Castro Camera shop at 573 Castro Street as a city landmark. The others related to LGBTQ history include the former home to the AIDS Memorial Quilt at 2362 Market Street; the Twin Peaks bar at the corner of Market, Castro and 17th streets, and the now-defunct Paper Doll restaurant and bar site at 524 Union Street in North Beach, where the late Bay Area Reporter founding publisher Bob Ross once operated an eatery.

When the building was deemed a city landmark in 1985, its LGBTQ history went unmentioned. It was added later when it was listed on the National Register of Historic Places in 2018.

Also listed on the federal register partly due to its LGBTQ historical ties, but not a city landmark, is the Federal Building at 50 UN Plaza. It was where the longest known AIDS protest took place in the mid-1980s into the 1990s.

The eighth LGBTQ historic site to become a city landmark is expected to be 396-398 12th Street. The South of Market property is home to the gay-owned Eagle bar and will be the first local landmark recognized for its ties to leather history.

The Board of Supervisors is expected to approve granting it local landmark status in July. It would be the second leather Eagle bar in the country to be deemed a city landmark, as Atlanta officials granted such status to their Eagle bar in December.