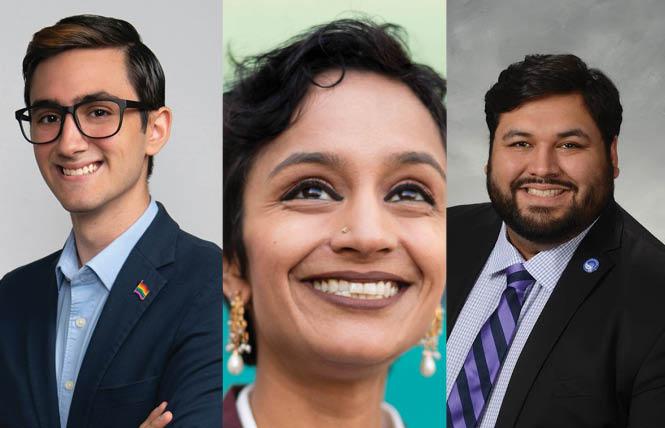 LGBTQ candidates James Aguilar, left, Janani Ramachandran, and Victor Aguilar Jr. (no relation to James) have all announced they are running to replace Attorney General-designate Rob Bonta in the 18th Assembly District. Photos: Courtesy the candidates

Nearly two years ago gay San Leandro Unified School District Board of Education member James Aguilar had told the Bay Area Reporter he planned to run for state Assembly in 2022 should a seat become vacant that year. A resident of the 18th Assembly District, Aguilar was waiting to see if Assemblyman Rob Bonta (D-Oakland) would opt to seek higher office that year rather than run for reelection.

Otherwise, Aguilar was set to seek Bonta's seat in 2024 when the legislator would be barred by term limits from running again. Now, due to a turn of fate for both elected leaders, Aguilar finds himself a candidate for the Legislature this year.

Due to Governor Gavin Newsom's decision Wednesday to name Bonta as California's next attorney general, a special election will be called to fill his Assembly seat should he be confirmed as the state's top prosecutor by the Legislature as expected. Aguilar already has a website and will officially announce his candidacy for Bonta's seat at 1 p.m. Friday, March 26, with a virtual event.

Aguilar, who turns 22 in November, would be the youngest person serving in the Legislature if elected, eclipsing bisexual state Assemblyman Alex Lee (D-San Jose) by several years. Elected in November at the age of 25, Lee became the youngest state lawmaker since 1938.

Aguilar would bring Latino representation back to the Legislative LGBTQ Caucus, which currently has two Latina lawmakers among its eight members. And he would increase the caucus's membership to a historic high of nine for the first time.

He would also be the first out lawmaker representing a solely East Bay district, as Bonta's seat includes the cities of Oakland, Alameda, and San Leandro. Lee's 25th Assembly District straddles both Santa Clara and Alameda counties, covering the cities of Fremont and Newark.

Talking to the B.A.R. in a phone interview Thursday ahead of his official campaign launch, Aguilar acknowledged he will be seen as an underdog in the race. But he said he is ready to hit the campaign trail and talk to voters about his plans on such issues as education, transportation, affordable housing, and climate change.

"I am well aware of the odds that are stacked up against someone like me, who has fairly little political structure, who is new to running state campaigns, who is new to the arena really," said Aguilar, a political science major at SF State scheduled to graduate next year. "The Oakland lobby stacks up against Alameda and San Leandro as Oakland is a powerful seat of power in the Bay Area, especially in the East Bay. I want to run an issue and value driven campaign and be able to promote issues happening in the state of California."

Other LGBTQ candidates
Aguilar is not the only out candidate in the race, as social justice attorney Janani Ramachandran, who is queer and lesbian, also announced Wednesday that she will seek to succeed Bonta. The Oakland resident had already launched her bid to run for the Assembly seat next year and gone live with a website in early March.

"As an East Bay native & social justice attorney, I've seen the transformations in our communities and the need for change. The time for timid ideas is over: we need leaders with the courage to fight for bold solutions," wrote Ramachandran in a March 3 Facebook post announcing her plans to seek the seat next year should Bonta not run.

She told the B.A.R. Thursday that she wasn't expecting to mount a vigorous campaign so soon but is jumping at the opportunity.

"It totally warps my timeline," said Ramachandran. "I am not looking forward to campaigning in such an expedited window of time. I am ready for it, the opportunity that is here, and I am doing it."

Listed among her top priorities are affordable housing, criminal justice reform, universal healthcare, and raising the state's minimum wage to $22 an hour. If elected she would be California's first South Asian Assemblywoman, as she is of South Indian descent, and would be the first legislator who identifies as queer and first out API female state legislator. She would bring the number of out women in the Legislature to four.

Ramachandran, 28, is an attorney at the Family Violence Appellate Project. She was a 2020 Victory Empowerment Fellow with the Victory Fund, which helps to train and elect LGBTQ candidates across the country.

She had launched her 2022 campaign early in order to build up her name recognition as a first time candidate for public office.

"The reason I wanted to do this early is I have a very clear vision of what I want to run on and very clear policies I want to enact if elected," said Ramachandran. "I need all the time to get my name out there and to fundraise."

Both Aguilar and Ramachandran serve as associate members on the Alameda County Democratic Central Committee. Ramachandran had served as an Oakland Public Ethics commissioner and is now on the California Commission on Asian and Pacific Islander American Affairs.

Alameda Vice Mayor Malia Vella, who is the first Filipina elected to her City Council, announced her entrance into the special election for Bonta's seat in a video she posted to Twitter Wednesday. The Alameda native had served as district director for Assemblyman Bill Quirk (D-Hayward) and was a field representative for former state Senator Ellen Corbett.

Thao would be the first Hmong woman to serve in the state Legislature. If Thao, Vella, or Ramachandran wins the race, they would be the only Democratic API woman in the Statehouse.

Whoever is elected to the seat will need to run for a full term in 2022. And depending on how the redistricting process turns out based on the 2020 census numbers, there is the possibility of the Assembly member being drawn out of their district.

Asked about that happening, James Aguilar told the B.A.R. he is focused on this year's electoral contest and will worry about the district boundaries later should he win.

"As an openly gay Latino man we need this kind of voice, these intersecting identities in the Assembly. I believe I am the one who can do it," he said. "I am an East Bay native born and raised in Oakland who now lives in San Leandro and I have family in Alameda. I am rooted in the East Bay and I know what we need."

UPDATED 3/26/2021 to correctly state that Assemblyman Quirk is still in office.