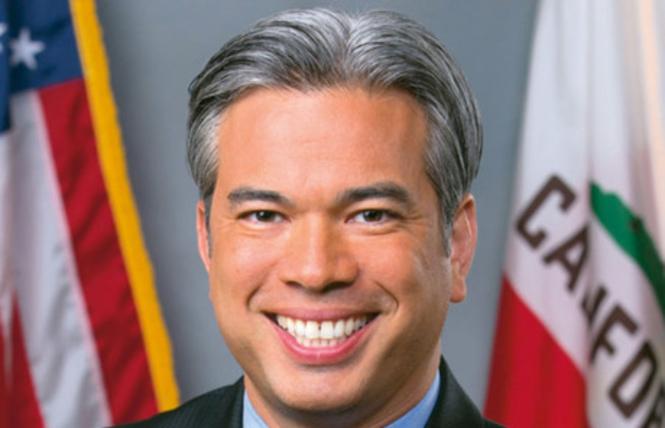 Both men announced the news on Twitter minutes before the governor held a news conference.

In this moment of sickening attacks on AAPI Californians there's no one better to defend CA values pic.twitter.com/Y3T1zdG5dK— Gavin Newsom (@GavinNewsom) March 24, 2021


Bonta will need to be confirmed by the state Legislature to replace former attorney general Xavier Becerra, who was confirmed as President Joe Biden's secretary of health and human services earlier this month.

I am honored & humbled that @GavinNewsom has chosen me to serve as your next Attorney General. Join our fight. https://t.co/nX8U3Xray4 pic.twitter.com/ANeOOxGIAj— Rob Bonta (@RobBonta) March 24, 2021

Bonta was elected to the Assembly in 2012 and became the first Filipino American state legislator in California's then 160-plus-year history.

"Rob represents what makes California great — our desire to take on righteous fights and reverse systematic injustices," Newsom stated in an announcement. "Growing up with parents steeped in social justice movements, Rob has become a national leader in the fight to repair our justice system and defend the rights of every Californian. And most importantly, at this moment when so many communities are under attack for who they are and who they love, Rob has fought to strengthen hate crime laws and protect our communities from the forces of hate. He will be a phenomenal attorney general, and I can't wait to see him get to work."

The governor's announcement puts Bonta in a position of overseeing the California Department of Justice at a time when violence against the Asian American and Pacific Islander communities is in the headlines, both in the Bay Area and nationally.

"Thank you, governor," Bonta stated. "I am humbled by the confidence you have placed in me. I became a lawyer because I saw the law as the best way to make a positive difference for the most people, and it would be an honor of a lifetime to serve as the attorney for the people of this great state. As California's attorney general, I will work tirelessly every day to ensure that every Californian who has been wronged can find justice and that every person is treated fairly under the law."

Bonta, a straight ally, has long been supportive of the LGBTQ community. In fact the GLBTQ+ Asian Pacific Alliance sent a letter to Newsom in February urging him to pick Bonta for the AG post once Becerra was confirmed.

"He has walked with us in San Francisco Pride. He wore our GAPA shirt to Oakland Pride. He has been recognized by the East Bay Stonewall Democratic Club," wrote GAPA Chair Michael Nguyen, referring to Alameda County's LGBTQ political group. "And most recently, he stood with us when members of our LGBTQ API community were being attacked."

Rick Chavez Zbur, a gay man who's executive director of Equality California and who was mentioned as a possible choice for attorney general, congratulated Bonta.

"I'm excited for my friend Rob Bonta, who has been a dedicated partner to Equality California over the years and will make an exceptional attorney general," Zbur stated. "Throughout his career, Assemblymember Bonta has demonstrated his commitment to protecting civil rights, safeguarding our California values and advancing justice for all.

"Now more than ever, California needs an attorney general who will stand up against the racist violence and discrimination that we've seen directed at Asian Americans across our state and the nation," Zbur added. "Assemblymember Bonta's appointment to serve as the state's top law enforcement official sends a powerful message that California is committed to protecting our API communities and securing racial justice and equity for all. I look forward to our continued partnership in creating a world that is healthy, just and fully equal for all LGBTQ+ people — and for the diverse communities to which LGBTQ+ Californians belong."

Since the start of the pandemic, the Stop AAPI Hate organization reported more than 3,700 incidents of anti-Asian attacks nationwide. Almost 50% of the attacks occurred in California and around 70% of the reports came from women. In 2021, more than 500 reports of anti-Asian discrimination have been reported, the caucus stated.

"Thank you, Governor Newsom, for appointing Assemblymember Rob Bonta as California's attorney general. We appreciate your leadership and commitment to the API Community," said Senator Dr. Richard Pan (D-Sacramento), chair of the API Legislative Caucus. "This appointment demonstrates California's belief that there is strength in our diversity. Assemblymember Rob Bonta is breaking another glass ceiling as the first Filipino American to become California's attorney general. He gives our communities hope and will lift API voices during a time of fear caused by the rise in anti-Asian hate crimes. Thank you again Governor Newsom for listening and responding to the needs of the API community."

"Hate crimes targeting the API community have skyrocketed over the last year, and we need a champion who will make the pursuit of justice for these victims a top priority," Low stated. "I have full faith AG Bonta is the right person to meet this moment."

"I've worked with Rob for four years in the Legislature, and we have frequently partnered on important legislation," Wiener stated. "He's a tenacious, thoughtful, and progressive leader. He'll do great things as attorney general. I look forward to seeing what he accomplishes in this important role."

Newsom made the announcement at the historic International Hotel in San Francisco, a site where Asian and Pacific Islander Californians famously rallied in 1977 to save homes of elderly residents and preserve their community. The protests helped fuel a rise in AAPI political activism. Bonta's mother, who helped organize the protest at the International Hotel, was on hand today to witness the governor making his selection, according to a news release.