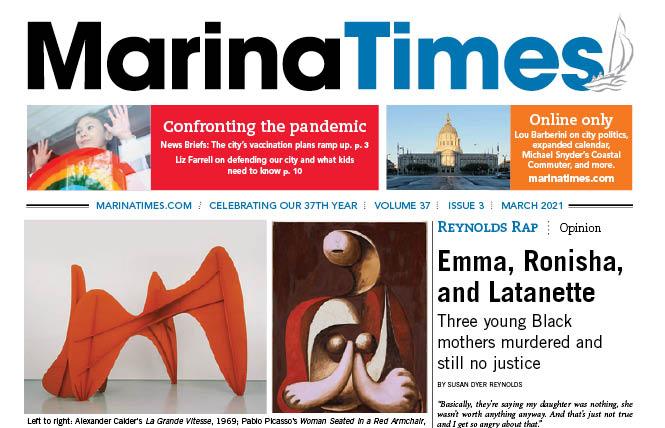 Several San Francisco Democratic clubs sent a letter to the new owner of the Marina Times, asking that editor emeritus Susan Dyer Reynolds be stripped of her title and access to the paper's Twitter account after she tweeted or retweeted what they deemed homophobic and transphobic tweets. Photo: Screengrab

Susan Dyer Reynolds, editor emeritus of the Marina Times community newspaper in San Francisco, is facing a backlash for several tweets that attacked a gay critic of hers by inferring he supported pedophilia. She also retweeted another person's comments that used transphobic language in talking about the Board of Supervisors.

A number of the city's Democratic clubs, including the two main LGBTQ political groups, are calling on the gay owner of the paper to strip Reynolds of her title as editor emeritus and block her access to the Marina Times Twitter account. Brian Calle, CEO and publisher of Street Media, also owns the LA Weekly and was the former opinion editor of the Orange County Register.

"When you purchased the Marina Times, you said that San Francisco is 'special' to you. We also feel this is a special city, in no small part because it has been the center of LGBTQ activism in the U.S. for decades, and a place where many queer people feel safe. When someone like Ms. Reynolds displays such blatant bigotry on behalf of a respected local institution, it detracts from what makes San Francisco unique, and hurts our community," wrote the political groups in their March 11 letter to Calle.

"In light of the blatant homophobia Ms. Reynolds displayed, in conjunction with her unwillingness to apologize, we feel it is inappropriate for her to continue to retain the title of editor emeritus and control over the Twitter account of a local news outlet in our City," stated the club leaders in their letter.

Calle, who bought the Marina Times and the Village Voice in New York City in December, has not responded to a request for comment from the Bay Area Reporter for this story. Reynolds, formerly editor in chief and a co-owner of the 36-year-old paper, also has yet to respond to the B.A.R.'s interview request.

After the Milk club posted the political group's letter on its Twitter account Thursday, Reynolds responded in a series of her own tweets, including one in which she said she currently lives with a gay man and in another explaining her relationship with the Marina Times.

"They don't seem to understand I sold @TheMarinaTimes, and I agreed to stay on to write my column — and manage Twitter until they got a social media manager in L.A. Whether I stay is my choice — but even if I decide to do my own thing, they won't be off the hook," she wrote.


In another tweet Reynolds wrote that she is "a 'homophobic' who took care of her gay best friend Steve — who marched with Harvey Milk — as he died of cancer and complications from AIDS. A homophobic who has a gay housemate, who, by the way, thinks you're 'a bunch of woke idiots' (his words, not mine)."

But she also retweeted another Twitter user who contended it wasn't surprising a club named after Milk "doesn't like" her as he was "a shitty corrupt politician investigated by the FBI for misappropriating funds allocated for a Pride center, and that's just the type of people she investigates."

As the B.A.R. noted in 2011 story about a trove of FBI files newly released at the time, the investigation into the charge was closed after Milk and then-mayor George Moscone were assassinated in 1978. According to Randy Shilts' Milk biography "The Mayor of Castro Street," Milk was aware of the federal agency's investigation, which he contended was "prompted by one of his gay adversaries who was jealously trying to get funding for his own community center."

Reynolds often gets into Twitter arguments with Brandon Harami, a gay man who is a former chair of the San Francisco Berniecrats political club. In particular, they often spar over San Francisco District Attorney Chesa Boudin, a frequent target of Reynolds both on the social media platform and in the Marina Times.

A step too far
But Harami and others contend Reynolds took it a step too far by accusing him of supporting pedophilia in several March 10 tweets. At 11 a.m. that Wednesday, in a since deleted tweet that had tagged both Harami and the account of the New York Times, Reynolds wrote, "This from a man who is fine with adult men dating underage boys."

The controversial bill led Wiener to be attacked by followers of the right-wing QAnon conspiracy and be subjected to death threats. Harami referred to the online abuse Wiener received in a tweeted response about Reynolds' broadsides against him.

"Wow Susan really double down and now accusing me of being pro pedophile for supporting SB-145," wrote Harami, noting he doesn't always agree with Wiener, "but we definitely agreed on this while you took the side of QANON in falsely equating it to being pro pedophilia."

The tweets apparently were in reaction to Harami replying to Reynolds in his own tweet earlier in the day with the question, "Don't you have some transphobic followers to rub elbows with?"

In an interview with the B.A.R. Harami explained his comment was referring to Reynolds often retweeting from accounts that use homophobic and transphobic language. In particular, he pointed to a parody Twitter account someone created about him that uses a photo of a man who he said is more effeminate than himself. It was that account that had retweeted one of Harami's where he spoke in favor of Wiener's bill by noting that at age 19 he had dated a man several years older than himself.

"She is lifting up these voices that are just out there to harass me," said Harami, who was raised by two gay dads who are nine years apart in age. "I think she has shown she is not professional. Calling a gay man pro-pedophile for dating someone older than you are when you are an adult, that is so bad. And then she doubled down and tried to defend herself."

In one tweet Reynolds defended herself by writing, "Homophobic dog whistles from someone who has been a huge supporter of the gay community for decades? My best friend Steve was gay — I took care of him while he died from cancer and AIDS. You're an idiot."

Criticism
Amid the back-and-forth others jumped into the Twitter fray, including Boudin, a progressive who is now the focus of a campaign trying to recall him a little more than a year into his first term.

"The Editor of The Marina Times just tweeted this disgusting, homophobic and dishonest attack on someone who politically disagreed with her. Shameful," wrote Boudin.

His chief of staff David Campos, a gay man who is chair of the San Francisco Democratic Party, also criticized Reynolds on Twitter for her "homophobic, hateful and ignorant" attack against Harami. "Shameful indeed."

The Milk club, which Campos once led, also joined in the condemnation of Reynolds on Twitter and asked her to retract, and apologize for, her tweets. When she didn't via her personal account, the club wrote in a second March 10 tweet that it was disappointed Reynolds had "not apologized nor retracted her promotion of tired and harmful tropes conflating queerness with pedophilia. Instead, she doubled down on the homophobia. This is inexcusable for anyone, least of all a newspaper editor in San Francisco."

In fact, Reynolds had apologized to Harami but did so via the Marina Times Twitter account. It came in response to his talking about his gay dads, who are married and have been together several decades.

"That's actually very cool," Reynolds wrote, tagging Harami. "And I'm sorry for what I said. My temper got the better of me after you called me transphobic, which I am not. I truly have been a huge supporter of the LGBTQ community and that hurt."

Because Reynolds had not removed all of her tweets where she invoked pedophilia in reference to Wiener's bill, the Democratic clubs decided to send their letter to Calle. Harami, speaking with the B.A.R. March 11, said he felt her apology fell short since it came not from her personal account but the account of the Marina Times.

"It is appropriate for her to resign," he said. "She retweeted transphobic stuff today."

That tweet ridiculed San Francisco Supervisor Myrna Melgar's announcement that she plans to count how many times her male colleagues on the board interrupt and talk over people during an undisclosed seven-day period this month in light of March being Women's History Month. Reynolds retweeted a person who asked if Melgar can "define what's a man, a woman?" since "progressives are very gender fluid."

Referring to Supervisors Dean Preston and Matt Haney, the Twitter user added, "In Progressive utopia, Dean and Matt can identify as women, so there's no mansplaining, is there?"

(Late last year Preston tried to revoke the advertising the city runs in the Marina Times due to the paper's attacks against him and others on Twitter. Media organizations, including the B.A.R., and others were critical of the suggestion, and the board ended up reauthorizing the advertising contract with the paper.)

Harami, an aide to Oakland City Councilwoman Sheng Tao, told the B.A.R. he has been subjected not just to online Twitter trolls but also has had to contend with people filing ethics complaints against him at work that were deemed to be unfounded, has been subscribed to right-wing publications, and was recently sent a suspicious package that turned out to be a glitter bomb.

"I wanna thank you all for standing up against homophobia. I am no stranger to it, and growing up with gay dads I have heard the pedophile remarks so many times in my life. I have thick skin and can troop through shit like this, but Susan should absolutely be fired," Harami wrote in one tweet this week.