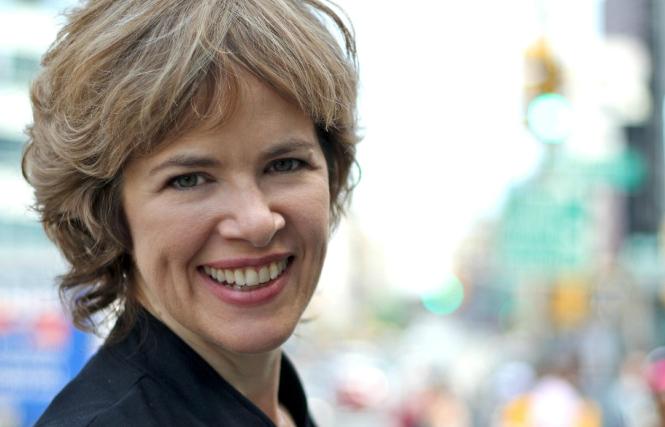 Queer, independent journalist Laura Flanders is searching America for alternatives to the social, government and economic systems that failed in this annus horrribilis.

"To me, this feels like now or never," Flanders said in a phone interview with the Bay Area Reporter. "With a pandemic, a recession, and a political debacle that showed the weakness in our systems, we need to see radical, palpable change in people's lives."

Finding where change is happening on a local and community level will be a main theme this year on Flanders' eponymous television program, which has been distributed by American Public Television on local affiliates of the Public Broadcasting Service since 2019.

In a wide-ranging interview, Flanders, 59 and a lesbian, discussed her journey from the radio and print to the small screen.

Coming from a family of journalists in the United Kingdom, Flanders came to Manhattan in 1980.

"I came to New York, initially for six months," she said. "I arrived the week before John Lennon was killed. I remember people saying 'I'm so sorry for your loss.' It was quite a moment to come to the U.S."

Flanders said that she was "enraptured by the possibility of the U.S."

"The knee-jerk response in the U.K. is 'you can't do that.' But in New York at that time people had the chance to try new things," Flanders said.

Becoming politically active as conservatism was taking power in the Anglosphere, in the form of Margaret Thatcher in the U.K. and Ronald Reagan in the U.S., Flanders said she threw herself into the women's movement; the LGBTQ movement; and the peace movement, particularly the movement for nuclear disarmament.

"I went to Northern Ireland with a camera and found myself in a protest, where right in front of me someone was shot with a rubber bullet," Flanders explained. "The press corps were all behind the police, and I was right in front of them. Being with the people gives you a frontline seat."

"One day, in the middle about the endless series about who in the Reagan administration would be implicated, Laura walks in and says 'you have to hire me; this is where I belong,'" Bernstein told the B.A.R. "I looked at her and I said 'you got it.'"

Over time, as he got to know Flanders, Bernstein found out about her family's journalistic past — her father, uncles, and sister were or are journalists.

"She's got a history in radical journalism but she's not bragging about them," Bernstein said. "It just comes out."

Flanders ended up hosting a show about issues the mainstream media of the time overlooked, a focus she continued in her role as founding director of the women's desk at the media watch group Fairness and Accuracy in Reporting, or FAIR.

"There are more than two sides to every story," Flanders said. "In the late 1980s, it was clear to us that lots of perspectives — people of color, women, queer people — were being sidelined. The news was being told solely from executive offices in Washington and New York."

Flanders said that she learned in the experience of reporting during the 1980s and 1990s individuals and groups were succeeding where larger institutions failed at meeting people's needs, whether it was "mutual aid networks helping queer people survive the AIDS epidemic or "cooperative fundraising for striking miners in Appalachia."

Yet many U.S. and Western officials were supremely confident, ignoring problems as American capitalism and international power reached an apotheosis during the fall of communist and socialist regimes.

In Nicaragua, the leftist Sandinista government fell in 1990. At that time, the American ambassador said that the U.S. would support any viable projects to spur economic growth. Flanders asked him, "What if one of those projects is a people's cooperative?"

"I remember him saying then, 'Absolutely not. Only one economic model has been proven to be successful and that is the capitalist model,'" Flanders said. "What we saw there was an ideological bias against an economic system that was doing a better job feeding the poor. There's another side to the story."

Flanders said that the last year has shown her to be right about alternatives to established systems citing, for example, how people are being housed and fed in spite of governments not going far enough to do so in the COVID-19 pandemic.

"I grew up with people saying, 'There is no alternative,'" Flanders said. "I just knew that wasn't true. It just simply wasn't true that alternatives didn't exist, and now it's accepted."

Flanders is married to Elizabeth Streb, and the couple is celebrating their 30th anniversary this year.

Flanders said that while she is radical in politics, Streb is radical with choreography.

"She does physical movement and I do social movement," Flanders said. "She moves more radically but is politically more liberal than I am."

Flanders said that "the system may not be in crisis; the system may be the crisis" and that what she considers the "mealy-mouthed pragmatism of the Obama years" won't cut it anymore.

"This is the year for radical organizing," she said. "Networks of mutual aid, peacemaking, and cooperation have kept people alive. In the 1930s it was the experiments people engaged in to keep people alive that [were] referred to as the laboratories of democracy. Will we get coverage of these laboratories? We'll do our best."