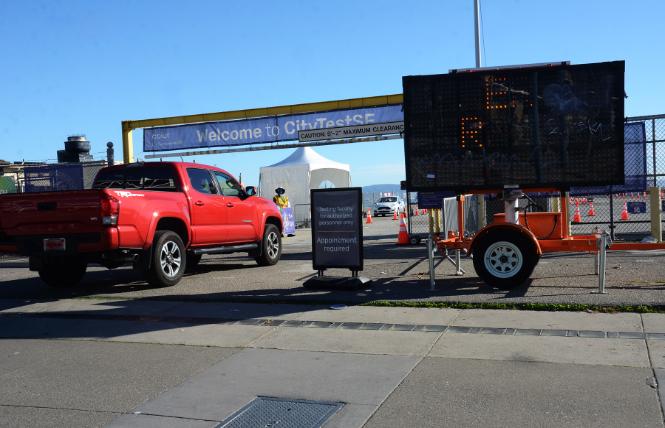 A national panel is pledging to work with California officials on addressing the lack of data about how COVID-19 is impacting the LGBTQ community.

The Public Health Work Group oversees what are known as Health Level Seven International (HL7) standards that provide guidance on the collection of certain patient characteristics, such as racial and ethnic data. But they do not include sexual orientation and gender identity (SOGI) data, which has hampered efforts in California and other states to collect health information about LGBTQ people in order to better address what is ailing them.

The issue has taken on greater import over the last year due to the COVID-19 pandemic, as the lack of SOGI data on people testing positive for the novel coronavirus has made it impossible to know how widespread infections have been in the LGBTQ community or how many LGBTQ Americans have been killed by the virus. Many LGBTQ people have underlying health issues that make them more susceptible to COVID-19 or work in front-line industries that place them at higher risk of contracting the virus.

As the Bay Area Reporter reported online January 21, Dr. Mark Ghaly, the secretary of the California Health and Human Services Agency, and gay state Senator Scott Wiener (D-San Francisco) had implored the co-chairs of the Public Health Work Group in a letter they sent last week to "take immediate steps" to address issues that are hampering efforts in California and other states to collect SOGI data in health settings.

In their letter Ghaly and Wiener asked the HL7 work group to immediately "modify its standards to include sexual orientation and gender identity (SOGI) data in such a way that ensures interoperability between California's laboratories and the state's electronic disease reporting and surveillance system. HL7's current lack of SOGI data standards is impeding California's efforts to measure, with the goal of ultimately ensuring, health equity for the state's LGBTQ and gender-nonconforming residents."

In response to the B.A.R.'s requests for comment from the work group co-chairs over the last two weeks, Health Level Seven International Director of Communications Andrea Ribick replied January 22 that the organization was drafting a response to the California officials. She added that no one would be available for a phone interview as the Public Health Work Group was holding meetings all this week.

In its January 25 letter to the California officials, the organization said it was committed to ensuring states could collect SOGI data on the people testing positive for the novel coronavirus. It offered "to provide guidance and identify key questions on the technical specifications needed to report this data from labs to state electronic disease reporting and surveillance systems."

"The mission and vision of Health Level Seven International is to provide standards that empower health data interoperability and support everyone securely accessing and using the right health data when and where they need it. This includes the LGBTQ community and many others," wrote Jaffe. "Our organization works diligently and cooperatively with global, federal and state stakeholders, industry groups, health care organizations, community groups and consumers to make this overarching vision a reality."

Jaffe added that his organization "is committed to helping all states and their partners leverage relevant HL7 standards to improve COVID-19 reporting — for the LGBTQ community and other vulnerable populations."

Asked about the response from Jaffe, Wiener said he found it lacking in specificity.

"At the moment, we haven't gotten enough clarity from the HL7 work group. I am hoping they will provide additional information in the future," Wiener told the B.A.R.

Sean Cahill, Ph.D., director of health policy research at the Boston-based Fenway Institute, an LGBTQ-focused health agency, told the B.A.R. he agrees with the California officials that the HL7 organization needs to address the issues surrounding SOGI data collection.

"HL7 definitely has an impact. The way it is asking the gender identity question is bad and they don't ask about sexual orientation at all," said Cahill in a phone interview with the B.A.R. "I hope they will turn on a dime and change it, but that is not traditionally how they have operated."

He pointed out that HL7 is currently using outdated language when it comes to asking people what their sex is.

"Right now it asks if a person's sex is male, female, other, or unknown. It is a terrible way to ask the question," said Cahill. "What we think they should do is ask what is the sex you were assigned at birth — male or female — and if you want to say intersex you can do that. Then it should ask what is your current gender identity."

As for collecting statewide LGBTQ COVID data, California officials need to be proactive in finding a solution to start doing so, Cahill said, and not wait for the HL7 organization to update its guidelines.

"I honestly think they need to come up with a creative workaround. I really do hope HL7 is updated, but I think there needs to be a Plan B with a workaround," said Cahill. "California, Massachusetts and other states have to figure out how to do this in the next couple of months."

Conference call held
Wiener and gay Assemblyman Evan Low (D-Campbell), the chair of the Legislative LGBTQ Caucus, held a virtual conference call with members of the HL7 work group January 7 to discuss the SOGI data matter. Wiener had told the B.A.R. they "had a really good conversation" about how the system works and what some of the challenges are in updating it to include the SOGI questions.

"It is a continuing conversation. They clearly understood why the data is important," said Wiener. "One of the real challenges they sort of flagged, which is very real because we have chaotic health care systems, is health care data in general is really fragmented and inconsistent and not great. It is not centralized."

Fed up last year after months of inaction on collecting SOGI COVID data, Wiener introduced legislation to require state health officials begin doing so. Last summer Ghaly instituted regulations that were expected to result in everyone getting tested for COVID-19 to be asked the SOGI questions.

Governor Gavin Newsom in September signed Wiener's Senate Bill 932 requiring the SOGI data to immediately be collected. But as the B.A.R. first reported in November, state and most local health officials had not fully implemented the law or the regulations. While San Francisco had been asking about gender identity, it only updated its COVID data collection to ask about sexual orientation last month.

The SOGI questions are often asked in both a doctor's office and also in lab settings, but the records are not easily shared among the different locations, noted Wiener, especially if medical systems and health care providers have yet to fully digitize their record keeping.

Wiener had reached out to the national work group co-chairs after he met late last year with Dr. Erica Pan, then the acting director of the California Department of Public Health, to discuss why the state health agency is not reporting the number of COVID tests and deaths among LGBTQ Californians. During their meeting, Pan for the first time brought up the problems related to the HL7 standards, Wiener told the B.A.R.

"What CDPH has told us is the labs get that data and it is being stripped out because the national reporting protocol that the labs use doesn't have SOGI fields," said Wiener. "So the data is effectively being stripped out when it goes into this system. We still don't have transparency about what happens to that data."

Because of the problems with the HL7 standards, there are no reporting protocols to share the SOGI data gathered at the local level with state health officials to get a clear understanding about how COVID-19 is impacting LGBTQ Californians, Wiener pointed out in his interview with the B.A.R.

"The federal system they use doesn't have SOGI fields, so we are all sort of pulling our hair out on this," he said. "CDPH either didn't know about this earlier or just got around to telling us now. It is very, very troubling."

The lack of the SOGI data collection regarding COVID cases and deaths was particularly frustrating for Wiener and other LGBTQ leaders since state lawmakers years ago had passed legislation requiring a number of the state's health and social service agencies to collect SOGI data. Other states have also sought to collect SOGI data but have encountered similar issues in reporting the information.

In their letter to the HL7 work group Ghaly and Wiener noted how state lawmakers had adopted Wiener's SB 932 last year in order to address the issues of SOGI data collection related to COVID-19 and other communicable disease cases.

They pointed out that the law requires local health officers update any electronic tools used to report cases of communicable disease to the CDPH to include the SOGI questions and requires health care providers to report, if known, the SOGI information of their patients with a case of a reportable disease.

"However, the absence of HL7 standards related to SOGI is creating a significant barrier to the ability of laboratory data systems to both ingest SOGI data sent to them by providers, and then to transmit those data to our state's electronic disease reporting and surveillance system," wrote Ghaly and Wiener. "We are urgently requesting HL7 to help rectify this situation as soon as possible by modifying its standards and guides to include reporting of SOGI data, especially the HL7 Version 2.5.1 guide for Electronic Laboratory Reporting to Public Health."

CA officials accuse panel of impeding the health of LGBTQ Americans
Sign up!