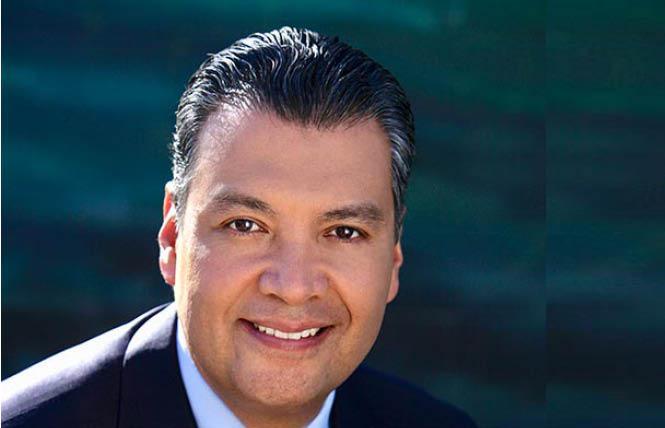 While many LGBTQ leaders had hoped to see an out politician succeed Vice President-elect Kamala Harris in the U.S. Senate, most praised Governor Gavin Newsom's decision to name Secretary of State Alex Padilla Tuesday as California's first Latino senator in Congress.

Equality California, the statewide LGBTQ advocacy organization, for instance had sent Newsom a letter encouraging him to pick gay Long Beach Mayor Robert Garcia for the Senate seat, or several other out leaders. The only members of the state's congressional delegation have been gay Congressman Mark Takano (D-Riverside) and bisexual former congresswoman Katie Hill (D-Agua Dulce). The national LGBTQ Victory Fund had also sent Newsom a letter asking him to name an out person to the seat.

In its letter to Newsom EQCA had also singled out Padilla as among several straight state leaders who would serve "honorably" if selected for an appointment. They had met a "very high bar and have never wavered in their commitment to advancing LGBTQ+ civil rights and social justice, even when it was not politically expedient for them to stand with our community," noted the letter, signed by EQCA Executive Director Rick Chavez Zbur.

Tuesday Zbur praised the selection of Padilla for the Senate seat. In August, Padilla became the first statewide elections official to forge a partnership with Drag Out the Vote, which named drag performers as ambassadors to disseminate accurate and timely election information.

Last year, Padilla worked with the Equality California Institute on a first-of-its-kind initiative to ensure transgender people's voting rights are not violated when they head to the polls.

"We know that Secretary Padilla will not be just a passive supporter of LGBTQ+ civil rights and social justice, but a full-throated champion who takes on our struggle for full, lived equality as their own," stated Zbur. "We couldn't be more excited to get to work with him to fight for LGBTQ+ civil rights, reproductive freedom and quality, affordable health care."

Newsom faced strong pressure from African American leaders, including several within the LGBTQ community, to name another Black woman to succeed Harris as once she officially steps down there will be no Black female senators. Gay Pinole City Councilman Devin Murphy, a Black man who is president of the Lambda Democratic Club of Contra Costa County, acknowledged those sentiments but also praised the choice of Padilla in response for comment by the Bay Area Reporter.

"Make no mistake, Senator Kamala Harris leaves big shoes to fill as the only Black woman in the United States Senate. That said, I am excited about Secretary of State Padilla's appointment and look forward to working with him to be an inclusive leader who will build a broad coalition to advance bold criminal justice reform, consumer protection, privacy rights, LGBTQ+ rights, cannabis equity, Medicare for all, clean energy and environmental justice," said Murphy, who as national committeeman of the California Young Democrats participated in a virtual conversation with Padilla in October regarding the fall elections.

Wiener told the B.A.R he's known Padilla for close to eight years now and called him a "strong pick" for the Senate seat. He added that he hoped to see Black women be among those named for other vacant positions.

"He will do well in the Senate and represent California well. It is past due for us to have a Latino senator," said Wiener. "I will say the dispute in terms of people advocating for Black women or a Latino it is tragic because both sides were right. We need to have more thank one Black woman, frankly, in the Senate, and California needs to lead the way.

"But Alex is a strong choice and there will be opportunities in the very near future to elevate a Black woman," added Wiener.

"Throughout Alex's career, he's been a dedicated public servant, just as he will be in this new role. VP-elect @KamalaHarris leaves big shoes to fill, and I know Senator Padilla will get the job done," wrote Atkins.

"Secretary Padilla is a worthy successor to Vice President-elect Kamala Harris, and we are certain he will represent our great state with honor and integrity," stated Low. "The LGBTQ Caucus cannot wait to continue working with him on issues affecting our community in the years to come."

Los Angeles resident Hans Johnson, a gay man who is president of the East Area Progressive Democrats, told the B.A.R. that Padilla is "a great pick" for a number of reasons, including his vote in support of marriage equality in 2007 by backing Assembly Bill 43, which was summarily vetoed by then-governor Arnold Schwarzenegger.

Johnson, married to Luis Lopez, who has run several times for a state legislative seat, also pointed to Padilla championing the controversial plastic bag ban enacted by state lawmakers in 2014. If not for Padilla's "political tenacity" in keeping the bill alive, it likely would have been killed due to the influence of the plastics industry, said Johnson.

"Not every lawmaker in Southern California is able to trace an arc that goes back to the anti-immigrant attacks of the 1990s," noted Johnson, who called today "a good day for California" due to the news of Padilla's appointment.

A son of working class immigrants
Padilla, 47, the son of Mexican immigrants who worked as a cook and a house cleaner, became California's first Latino secretary of state in 2015 and was easily reelected in 2018 to a final second four-year term. In his announcement about the Senate appointment, Newsom noted that Padilla received the most votes of any Latino elected official in the United States in that election.

"Through his tenacity, integrity, smarts and grit, California is gaining a tested fighter in their corner who will be a fierce ally in D.C., lifting up our state's values and making sure we secure the critical resources to emerge stronger from this pandemic," stated Newsom. "He will be a senator for all Californians."

In a statement Padilla said he was "humbled" to be appointed by Newsom to serve in the U.S. Senate.

"I'm the proud son of immigrants. My parents met as immigrants from Mexico - they fell in love, got married, and applied for green cards, ready to embrace a country that valued hard work and opportunity," stated Padilla. "That's something they instilled in me, from my father working his way up from a dishwasher to head cook at a local diner with only an elementary school education (he liked to boast that his kitchen 'never failed an inspection'), to my mother working tirelessly as a housekeeper for affluent families."

A teenage organizer in his rough Los Angeles neighborhood who went on to become an engineer, Padilla was motivated to seek elective office when California voters passed a sweeping anti-immigration ballot initiative in 1994. He would become the youngest Los Angeles City Council president in the city's history then serve as a state senator before being elected secretary of state, helping to register a record-breaking 22 million voters.

"Now, I'm excited to do the same as California's next senator — to keep on fighting, to keep on building on that opportunity," stated Padilla. "I still live less than five miles from the home I grew up in, and I'm still fighting for the same progress I was as an upstart teenager in Pacoima."

Other positions to fill
With Newsom's decision to appoint Padilla to the Senate seat, he will be facing even more pressure to tap a non-Latino for the various other positions he is expected to need to fill in the coming months. Should Attorney General Xavier Becerra be confirmed as the country's next Health and Human Services secretary, then Newsom will likely face growing calls to name Contra Costa County District Attorney Diana Becton, a former judge who is African American, as Becerra's successor.

It is also speculated that Newsom will name former San Francisco supervisor Malia Cohen, a Black woman now on the state's Board of Equalization, to succeed Padilla as secretary of state.

Congresswoman Barbara Lee (D-Oakland), a progressive lawmaker who had been mentioned as a possible pick for the Senate seat, congratulated Padilla on his "historic appointment" in a statement.

"Secretary Padilla has a track record as a skilled legislator and a steadfast advocate for justice, and I believe he will be a powerful voice in the Senate for those who continue to be denied our country's promise of equality," stated Lee, vice chair of the Congressional LGBTQ+ Equality Caucus. "I look forward to working with him on behalf of all Californians to address the economic and public health crises we are facing, and to create a brighter future for our state and for communities across the country."

Political Notes: Padilla pledges to push for Equality Act if given full term
Sign up!