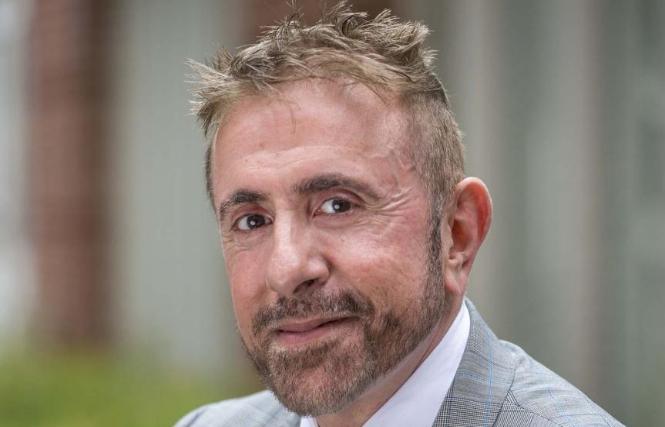 Rutgers School of Public Health Dean Perry Halkitis, Ph.D., believes that the impact of COVID-19 can't be understated, not only for the LGBTQ community, but everyone. Photo: Rutgers University

Preliminary numbers show the impact that the COVID-19 pandemic and its changes to daily life are having on LGBTQ people — and suggest lessons that can be learned from the fight against HIV/AIDS.

Perry N. Halkitis, Ph.D., a gay man who is dean of the Rutgers School of Public Health and director of the Center for Health, Identity, Behavior & Prevention Studies, discussed that and more in a wide-ranging interview with the Bay Area Reporter November 19, as the pandemic reached a new alarming stage.

The previous day, the United States reached yet another grim milestone — a quarter million fatalities, making the pandemic one of the largest mass casualty events in U.S. history. As of November 19, total cases had risen 77% over the previous two weeks, and deaths had risen 52%, according to the New York Times.

Following the interview, it was reported that California Governor Gavin Newsom decided to enact a curfew from 10 p.m. to 5 a.m. in the counties of the state's purple tier, beginning Saturday, November 21, and continuing until December 21. San Francisco is currently in the red tier, though it could slip to purple soon.

"Very, very preliminary numbers" from a CHIBPS survey of 1,090 LGBTQ Americans show differences in the community between its elements and between it and the general population.

"We're doing the nuanced analysis as we speak, but in general I'm disturbed," Halkitis added.

"You're seeing this consistent with tobacco and marijuana — 47% more use since COVID," Halkitis said.

Meanwhile, racial and ethnic minority groups are bearing the brunt of the disease, Halkitis explained.

"General population data shows pretty consistently that most racial and ethnic minority groups — who oftentimes are frontline workers, including people working in stores and at restaurants — tend to have higher exposure and worse outcomes," Halkitis said, citing U.S. Centers for Disease Control and Prevention numbers. "That's neither surprising nor out of sync and is part of the syndemic argument."

As the B.A.R. previously reported, Halkitis argues that LGBTQ people face a "syndemic," or multiple overlapping epidemics, of HIV infection; abuse of alcohol, tobacco and other drugs; methamphetamine use; and lack of access to health resources. These have compounded each other in the LGBTQ community for years, Halkitis' research has found, and are now overlapping with the COVID-19 pandemic and its greater impact on members of minority groups.

One can see this in testing and treatment, Halkitis said, discussing the difference between the medical care President Donald Trump received last month after he contracted the virus and what the average American experiences.

"When someone older is exposed to the virus, there is potential for horrible outcomes, but when you get hundreds of thousands of dollars worth of care, it's not so bad," Halkitis said.

"There are endless lines for testing. We're making it difficult for people to access care. Now for $119, I can purchase a test and send it back [in the mail]. That's a huge difference from the experience of most people, who may even expose others while in line."

Halkitis said that rural, white Americans are facing similar challenges to urban, minority Americans, citing bad numbers in North Dakota, where data show COVID-19 has killed one in every 1,000 residents in the state.

"What you're seeing are bad outcomes in rural areas, which are not communities of color but which are poor," Halkitis said. "The social circumstances and structural factors of Black and Brown people aren't so different from rural white Americans, minus discrimination."

'We know how to fucking do this'
Halkitis said that HIV/AIDS organizations have been able to deliver imperative public health messaging to harder-to-reach groups, and that this is needed now.

"For us, from the community perspective, we need the HIV organizations to step up," Halkitis said. "They know how to reach people. We know how to fucking do this — we've done this for 40 years."

When asked for comment on Halkitis' remarks, San Francisco AIDS Foundation Vice President of Program Administration & Operations Ben Cabangun stated, "community-based organizations are essential to respond to public health cris[es] like the one we face today."

"Community-based organizations around the world are part of the fabric of public health and have a demonstrated history of working with and for the communities and neighborhoods we're in. Through the years, public awareness campaigns put forward by CBOs including San Francisco AIDS Foundation have been instrumental in increasing the adoption of HIV treatment and PrEP, for example," Cabangun stated in an email. "CBOs have the ability to localize public health messaging in a way that integrates the cultural nuances relevant to people we serve every day. Our communities trust messages from CBOs differently than messages that come from institutions because they might seem distant, generic and might not speak to personal and local experiences."

He added that SFAF has worked closely with the San Francisco Department of Public Health on COVID-19 response.

"Not only are several team members working as case investigators and contact tracers because they are uniquely skilled to connect to community members, but also our harm reduction teams are providing an increased level of service working with people who have been temporarily housed in hotel rooms during the COVID pandemic," Cabangun said.

Halkitis said that people need to advocate for more testing, but from a federal perspective what is most necessary is a national plan.

Greece, which had a national, coordinated effort saw six deaths per 100,000 people, compared to the United States, which has had 76, Halkitis said, adding that Greece had a much stricter lockdown than the U.S.

"It's almost as if we are in a situation where that's going to have to happen," Halkitis said. "There is no way to get this virus under control without that kind of restriction."

Halkitis is pleased with President-elect Joe Biden's response thus far, even though he really can't do anything until he takes office January 20. Still, Biden and Vice President-elect Kamala Harris have formed a COVID-19 task force and are meeting with medical and public health experts.

"When did we have a national HIV plan? In 2010, when [Barack] Obama and Biden were in office," Halkitis said. "The people on that team are some of the best. I think there is a strategy and right now we need to get vaccinations to people."

Multiple vaccines against the virus that causes COVID-19 have been shown to be highly effective and are headed to the U.S. Food and Drug Administration for emergency approval. The FDA will be meeting December 8-11 to discuss Pfizer's and Moderna's vaccines.

But although it may lead to "outcomes that feel morally questionable," as Christopher Cox of Wired magazine suggested in a recent piece on the idea, it may be best to first vaccinate individuals who are not as compliant with CDC recommendations.

"You can see it as rewarding bad behavior or you can see it as protecting people from these risks. Older people wouldn't get it if younger people didn't give it to them," Halkitis said. "It's not rewarding behavior. If you're not going to be responsible then we have to vaccinate you."

News so far has indicated that those most vulnerable, such as frontline workers and the elderly, likely will be vaccinated first, followed by other groups. Mass vaccinations are not expected to be available until the spring, according to news reports.

The CDC on November 19 advised people against traveling on Thanksgiving, and Halkitis repeated those recommendations (though he said others haven't quoted him on these sentiments).

LGBTQ Agenda is an online column that appears weekly. Due to the Thanksgiving holiday, it will next appear December 8. Got a tip on queer news? Contact John Ferrannini at j.ferrannini@ebar.com

Updated, 11/20/20 This article was updated to indicate San Francisco may fall into the purple tier soon and include comments from SFAF.