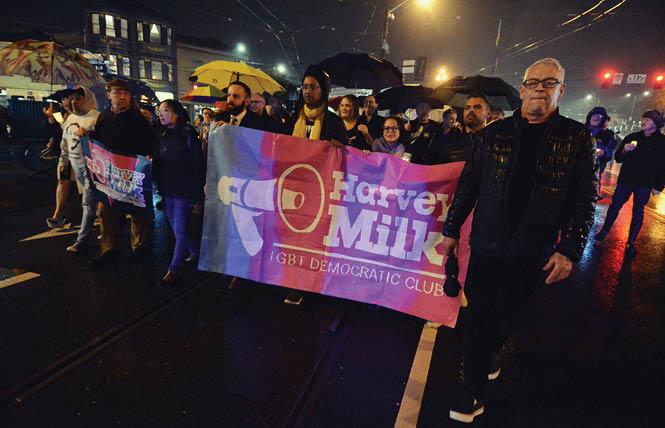 The 42nd annual vigil to remember two progressive San Francisco politicians who were killed while in office is going virtual this year due to the COVID-19 pandemic.

The event honoring the late gay Supervisor Harvey Milk and former Mayor George Moscone most years is held in person in the city's LGBTQ Castro district on November 27, the day in 1978 when disgruntled former supervisor Dan White gunned down both men inside City Hall. Similar to the candlelight march that took place that evening from the Castro, where Milk operated a camera shop, and headed to the Civic Center, community members each year gather at the corner of Market and Castro streets to remember the two civic leaders.

On certain occasions the somber walk down Market Street to City Hall is recreated, while most years attendees light candles and head down Castro Street to regroup in front of Milk's former business at 575 Castro Street. (It now houses the store and action center for national LGBTQ advocacy organization the Human Rights Campaign.)

With COVID-19 cases and hospitalizations on the rise in San Francisco, organizers of the event are taking a different approach this year in order to protect the public's health and avoid the vigil leading to transmission of the coronavirus.

"We didn't want to hold anything that would encourage the gathering of crowds given we are spiking in COVID cases and about to be plunged into yet another dark period of the virus. So we are going to host a virtual version of the memorial," said Stephen Torres, a gay man who is secretary of the Castro LGBTQ Cultural District.

Torres, who helped produce the virtual birthday event for Milk held May 22 on what is officially celebrated as Harvey Milk Day in California, is working with Jackie Thornhill, the Harvey Milk LGBTQ Democratic Club's vice president for events and fundraising, to plan the memorial the evening after Thanksgiving. The political group is the main presenter of the yearly vigils.

The "42: 2020 Milk-Moscone Vigil" will be broadcast online starting at 6:30 p.m. Friday, November 27. As in past years, friends and former colleagues of Milk and Moscone as well as LGBTQ community leaders will make remarks.

"For anyone who is able to make it on and who knew Harvey Milk or George Moscone back then and wants to share their stories, we will try to create space for that," said Thornhill, a transgender woman who is an administrative aide to District 1 Supervisor Sandra Lee Fewer.

A video memorial that will be broadcast during the online vigil will also be projected on a loop onto the side of the building at 400 Castro Street, which now houses a Soulcycle and fronts Harvey Milk Plaza from where the vigil and march normally kicks off. Thornhill told the Bay Area Reporter the montage of archival footage should be continuously shown between 6 and 8 p.m. that evening.

Political history
Milk made political history in November 1977 by becoming the first out politician of a major American city, and the first in California, after winning a seat on the San Francisco Board of Supervisors to represent the Castro, Noe Valley, and the Haight. It was his third time seeking the political office, and his victory was helped by the city deciding the year prior that supervisors should be elected by district rather than citywide.

Such a factor was replicated this November in the victories of a number of LGBTQ councilmembers-elect in cities around the Bay Area where voters elected their city council people by district rather than citywide. It allowed for young, queer candidates to defeat incumbents or, in the case of Santa Clara City Councilman-elect Anthony Becker, to become the first gay man to win elective office in his city on his third try, similar to Milk.

Milk club co-President Kaylah Williams told the B.A.R. it was important that the vigil for Milk and Moscone be held this year and not scrapped due to the health crisis so that it can offer some sense of community during a time when so many people are sequestered at home and unable to be with their family and friends on Thanksgiving because of the virus.

"It is important, especially now more than ever, as we are all kind of in our own silos, quarantining and stuck at home. In these moments community is so important," said Williams, who is bisexual and was furloughed from her job as a flight attendant.

For many Milk club members the group is more than just a political outlet, noted Williams, and has become a part of their chosen family here in the city. And particularly this year, due to the pandemic, protests against police brutality, and a stressful presidential election, Williams sees the vigil as a way to fulfill Milk's famous entreaty to give people hope for their lives and a better future.

"In 2020, in this time I think you got to give them hope and put that into our organizing. When I think about this year, and it has been fucking hard, I take this time to honor them both and think about the legacy they pass on and hope they have inspired," said Williams. "Through their assassinations there was not just a lot of anger but also a lot of hope to push forward with what they fought for. I see this year in a very similar way. It has been a really rough year and caused a lot of civil unrest but hope keeps us going forward and keeps us progressing."

To register to watch the vigil via Zoom, click here. 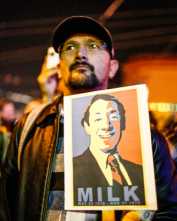