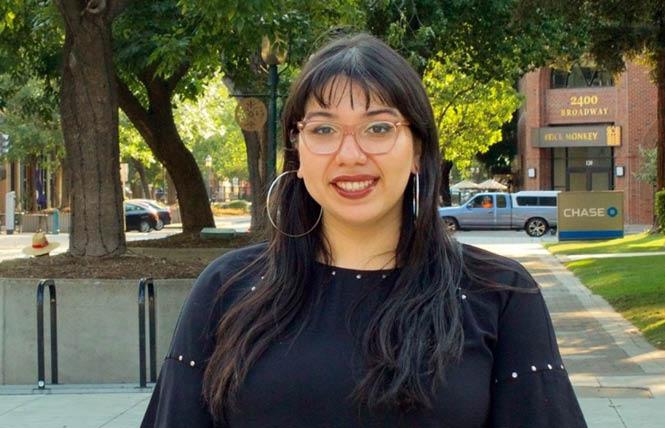 With their victory in the race for the newly created District 3 seat on the City Council in Redwood City, Lissette Espinoza-Garnica has become the Bay Area's first nonbinary city council member.

At 24, Espinoza-Garnica will also be one of the region's youngest out city council members when they take their oath of office Monday, December 7. They will be one of the first LGBTQ council members in Redwood City, as planning commissioner Michael Smith, 36, a gay Black business entrepreneur, ran unopposed for the newly created District 4 council seat.

They were among four people of color elected to their city council in the November 3 election. It marks a historic shift for Redwood City, whose current council is comprised of five white women, one Latina, and one male person of color who is leaving office this year.

Espinoza-Garnica is a first-generation queer, nonbinary Chicanx who has lived in Redwood City their entire life. A graduate of Santa Clara University, where they earned an English degree, Espinoza-Garnica was one of two nonbinary local city council candidates running this fall.

In San Ramon, 21-year-old Sameera Rajwade lost their bid for the East Bay city's newly created District 3 seat on the City Council. According to the LGBTQ Victory Fund there are two nonbinary council members currently serving in New York state, and one each on borough councils in both New Jersey and Pennsylvania.

In addition to Espinoza-Garnica's historic victory, Mauree Turner also broke through a pink political ceiling this month with their election to the Oklahoma state Legislature. It makes Turner the first nonbinary state legislator in the country and the first Muslim lawmaker in Oklahoma.

"I think it is wild to think of. I didn't know I would be accomplishing that when I started. It is a trip," Espinoza-Garnica told the Bay Area Reporter in a brief phone interview Friday about their being the first nonbinary council person-elect in the region.

They are one of a trio of newly elected out council people on the Peninsula, as bisexual South San Francisco resident James Coleman, 21, won election to his city's newly created District 4 seat on the South San Francisco City Council. He defeated City Councilman Richard Garbarino who previously has been elected citywide and is currently serving as mayor.

Coleman will be sworn into office Tuesday, December 8. His first City Council meeting will be the next night.

The victories by the out political newcomers "is a historic moment," said Chris Sturken, co-chair of the San Mateo County Stonewall Democrats. The LGBTQ political group had endorsed both Coleman and Smith; it was barred from endorsing Espinoza-Garnica because they are not a registered Democrat.

Sturken, a queer resident of Redwood City, also called the election results "historic" for his city because, "We are turning the tide in terms of real representation of the LGBTQ community and of communities of color."

The key to all three's victories was the fact they were seeking district-based council seats and did not have to run citywide, a far more expensive proposition and a daunting task when up against incumbent council members. In Coleman's case, he had to wage his campaign from his dorm room at Harvard, where he is set to graduate in May.

"The fact is he didn't have to win nearly as many votes. He could focus his energy and resources on that small pool of voters in that small geographic area. It really gave him an advantage as a first-time candidate," said Sturken.

It also worked in Espinoza-Garnica's favor in their being able to defeat City Councilwoman Janet Borgens, who had been elected citywide and was running for the first time in a district. With half of the district's 3,000 eligible voters under the age of 50 and many people of color, Espinoza-Garnica had seen there was a clear path for them to win the race.

"I think it does work more on my behalf, having the district this year. Having to run citywide would have been a lot bigger challenge campaigning for," Espinoza-Garnica had told the B.A.R. this fall.

As of Wednesday Espinoza-Garnica was leading by 180 votes and had garnered 41.33% of the ballots cast, while Borgens had 35.44%. On Friday, November 13, that lead had increased to 215 votes.

Laid off from their preschool job due to the COVID-19 health crisis, Espinoza-Garnica has been serving as their grandmother's caretaker. Active in local Black Lives Matter protests, Espinoza-Garnica jumped into the City Council race after being upset by the current council's not heeding community demands that it reduce the police department's budget.

While a member of the Democratic Socialists of America Silicon Valley chapter, they ran as an independent candidate with no party preference. Asked about their win, Espinoza-Garnica told the B.A.R. they were always pretty confident about their ability to be elected.

"I knew I had an advantage," said Espinoza-Garnica about running for a district-based council seat. "I contacted every voter in the district either with my literature or knocking on their door."