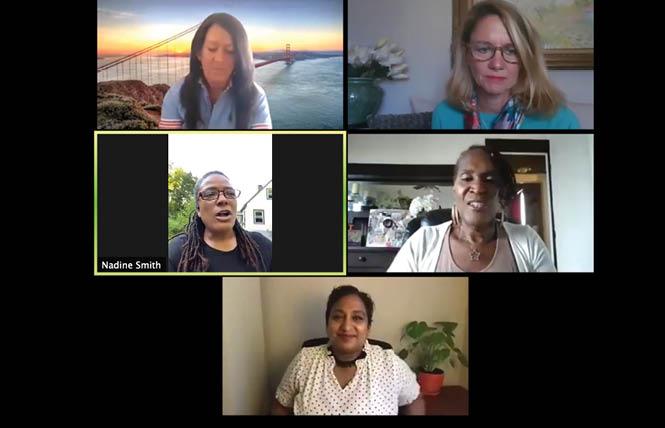 Presumptive Democratic presidential candidate Joe Biden's campaign held a wide-ranging virtual national conversation for LGBTQ+ women August 13, as participants praised his selection of Senator Kamala Harris as his running mate and expressed hope for a future under a new administration.

The speakers also noted that much work remains to defeat Republican President Donald Trump in November.

"LGBTQ+ women like you and me are all so excited vice president Biden announced Kamala Harris to be his running mate," Pili Tobar, Biden for President's communications director for coalitions, said in opening the Zoom meeting.

Tobar said that Harris, the junior senator from California, "has a strong LGBTQ record."

"We are very excited about that," she added.

Key areas of Harris' work on behalf of the queer community include her decision not to defend Proposition 8, California's same-sex marriage ban, when she served as state attorney general. In 2013, she presided over the first same-sex marriage in the Golden State — between Prop 8 plaintiffs Kris Perry and Sandy Stier — after the U.S. Supreme Court restored marriage equality and threw out the ballot measure on a technicality as the proponents did not have standing to appeal it to the high court.

While Harris was San Francisco's district attorney she helped end the use of so-called gay and trans panic defenses. As DA, she convened a two-day conference of prosecutors and other law enforcement leaders from around the country to discuss strategies to counter that defense. She supported Assembly Bill 1160, the Gwen Araujo Justice for Victims Act, which provides that the state include jury instructions to ignore bias, sympathy, prejudice, or public opinion in making their decision, also making mandatory for district attorney's offices in California to educate prosecutors about panic strategies and how to prevent bias from affecting trial outcomes. Then-governor Arnold Schwarzenegger signed the bill in 2006.

In the U.S. Senate, she has worked to enact a federal lynching ban and expand access to HIV medications like PrEP and PEP

Harris is the first Black woman to be named to a major party's presidential ticket, as well as the first person of Indian descent. She is the daughter of a Jamaican-born father and an Indian mother.

Harris, 55, ran for the 2020 Democratic presidential nomination but dropped out of the race last December amid low polling numbers and finances. Since then, she's been campaigning for Biden — as have the other former Democratic candidates — and was viewed as a top contender for the vice presidential pick.

Katherine Rice, the Biden campaign's LGBTQ+ policy co-chair, moderated the conversation. She asked the guests to talk about not only Biden's selection of Harris, but also other issues facing the community. All of the panelists spoke as individuals.

Andrea Jenkins, a Black trans woman who is a Minneapolis City Council member, said that she found herself "surprised" by how excited she was when Biden announced his choice of Harris August 11.

"I've been involved in electoral politics for over 20 years and I was completely elated when I saw the announcement," she said. "As an African American trans woman on the Minneapolis City Council, I know how important representation is."

Colorado state Representative Leslie Herod (D-Denver) was the first LGBTQ African American elected to the General Assembly. Since her election in 2016, she has sent 68 bills to the governor's desk, including ones to end cash bail and banning race-based discrimination on the basis of hairstyle and hair texture.

She said that she heard from Harris while navigating her bill to end qualified immunity for law enforcement through the Legislature. Qualified immunity grants government officials performing discretionary functions from being sued. Calls for its demise have been a focal point in the recent Black Lives Matter protests that began after police killed George Floyd in Minneapolis May 25.

Jenkins noted that she represents the ward where Floyd "took his last breath."

"We have to talk about racism, ableism, and all these intersections women, and especially Black trans women, experience," she said.

She also pointed out that so far this year, there have been at least 25 killings of Black and Brown trans and gender-nonconforming people. In all of 2019, "which was horrific," Jenkins said, there were 27 such killings.

Nadine Smith, a Black woman who's executive director of Equality Florida, also commented on the need for changes in policing following the deaths of Floyd and other Black people.

"The uprisings in the wake of police brutality and demands for big structural change — that's the energy that's going to get us through," she said, referring to a Democratic presidential victory in November.

She expressed hope that a Biden-Harris administration would use the high court's ruling to create explicit policies that would convey equal rights to LGBTQ people in areas such as housing and education.

Chandy also said that she believes many of the federal judges nominated by President Donald Trump are unqualified and welcomed a change if Biden is elected.

"This country is animated by deep, deep wrongs, but strives to do better," she said. "We need to capture the energy of this moment and turn a corner."