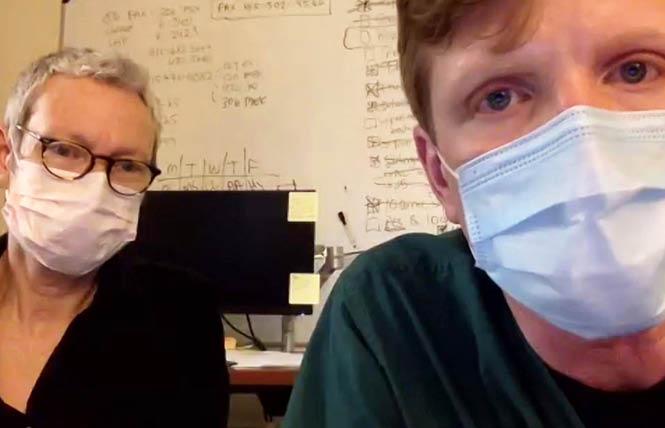 People living with HIV in San Francisco are not contracting the new coronavirus or developing severe COVID-19 more than HIV-negative people, speakers said at an April 23 virtual town hall hosted by the Getting to Zero Consortium and Ward 86, the HIV clinic at Zuckerberg San Francisco General Hospital.

"We haven't seen people with HIV coming into the hospital more or having more severe disease at all," said Ward 86 medical director Dr. Monica Gandhi. "But with the higher rates of poverty and marginal housing among our patients, there's a real concern about transmission."

Gandhi said that at the time of her talk, approximately 12,600 coronavirus test results had been reported citywide, about 1,300 of which were positive, and 21 residents had died (now up to 23). Latinos comprise the most cases by far, at 29%, but Asians account for more than half of all deaths. Only one person under age 60 has died so far.

These rates are low compared with harder-hit areas like Los Angeles, New Orleans, and New York City. Experts think this is largely thanks to the city's early physical distancing efforts, but the low case number also reflects limited testing.

Efforts are now underway to test more of the city's population regardless of symptoms, starting with part of the Mission district, which has many Latino residents. This will help health officials get a better idea of how many people are currently infected and how many have antibodies, indicating past infection.

Knowing how many people have had the coronavirus will reveal how deadly COVID-19 really is and how much of the population might have some immunity. Although existing tests are not highly accurate, recent studies suggest that the virus has been circulating longer than expected, more people have had it, and many have not had symptoms.

COVID-19 and HIV
Three hundred people with HIV have been tested for the coronavirus and 36 were positive, accounting for just under 3% of all cases in the city. Hardly anyone has developed severe illness and none have died, according to Gandhi. Low rates of severe illness among HIV-positive people with COVID-19 have also been reported in China, Spain, and New York City.

Although people with badly compromised immune systems are more likely to become seriously ill, experts say this doesn't apply to HIV-positive people who have an undetectable viral load and a near-normal CD4 T-cell count. (Nearly 80% of San Franciscans diagnosed with HIV have achieved viral suppression.) However, a quarter of people living with HIV are over age 60 and many have underlying health conditions associated with worse COVID-19 outcomes, such as cardiovascular disease and diabetes.

The lower than expected occurrence of severe COVID-19 among people with HIV has led some to speculate that they might somehow be protected.

Certain HIV medications, including Kaletra (lopinavir/ritonavir), have shown some activity against the new coronavirus, but results from clinical studies to date have largely been disappointing. Dozens of trials are currently testing antiretrovirals for COVID-19, including tenofovir, which is part of the widely used Truvada PrEP pill. So far, however, there is no definitive evidence that any drugs used to prevent or treat HIV can also prevent or treat the coronavirus.

It's also possible that people with somewhat weaker immunity could have less severe COVID-19 lung damage, which is caused by the immune system's response rather than by the virus itself. In the most severe cases, an immune overreaction known as a cytokine storm can trigger excessive inflammation that harms organs throughout the body.

"Maybe if you're a little bit immunosuppressed, your inflammatory response may not be as crazy and out of control," Gandhi suggested. But there are potential drawbacks as well. "So far, it looks like anyone who has been exposed [to the coronavirus] probably is going to get antibodies, but it's possible that people living with HIV may not get their antibodies for a while," she added.

Many resources available
The rest of the forum was devoted to meeting the needs of people living with HIV during these difficult times. Many HIV-positive people, like others, are facing financial challenges related to the ongoing economic collapse, but many resources are available, speakers said.

Andy Scheer, a social worker with the Department of Public Health's City Clinic, discussed access to HIV care and health care coverage during the crisis. The city remains committed to ensuring a quick and easy entry into care for people with HIV, which now includes tourists who are stuck in the city because of travel restrictions, he said.

People can still get services at City Clinic, Ward 86, and the SF AIDS Foundation's Magnet program at Strut in the Castro. City Clinic is still seeing people who have symptoms of a sexually transmitted disease or who need post-exposure prophylaxis (PEP), pre-exposure prophylaxis (PrEP), or emergency contraception, Scheer said. Check out the DPH's website for tips on safer sex during the COVID-19 crisis.

Scheer added that many clinics are deferring HIV viral load and other tests unless they're absolutely necessary, and many are turning to telehealth and other technology to connect with clients.

As for insurance coverage, Covered California has extended its enrollment period and the state's AIDS Drug Assistance Program and Office of AIDS Health Insurance Premium Payment program expiration dates have been extended. Re-enrollments and new enrollments can be done by phone or email. The OA-HIPP can pay COBRA premiums for people who have lost their job, and ADAP will cover medications while waiting for Medi-Cal to be approved.

"Although it may feel like everything in the city is closed, we are very much here," he said. "If people are struggling and want to simply show up, that is very much an option. We want to help people because we know that this is difficult."