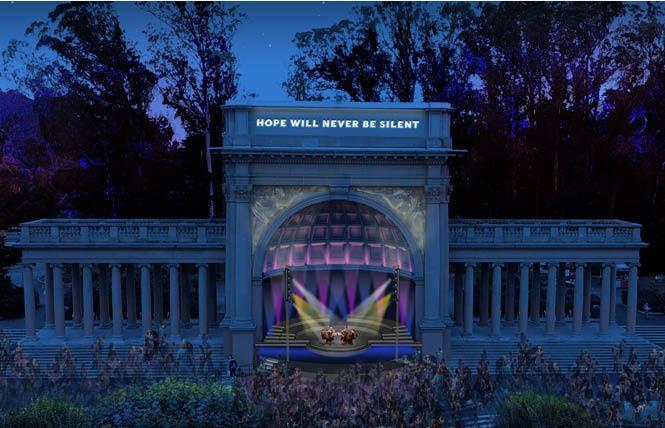 A project that would see the first tribute to an LGBT individual installed in San Francisco's Golden Gate Park outside of the National AIDS Memorial Grove has hit a hiccup in the city's approval process due to its rejection this week by the Historic Preservation Commission but approval by the Recreation and Park Commission.

As part of the city's plans to celebrate the green space's 150th anniversary this spring, a local arts group wants to install a temporary light piece of the words "Hope will never be silent" along the top center of the Music Concourse Bandshell in a typeface inspired by historical inscriptions found on the nearby water fountains. The quote is widely attributed to the late gay Supervisor Harvey Milk, though it is unclear when he first said it.

It secured approvals this week from both of the city's oversight panels for everything it plans to install at the bandshell except for the lighted artwork inspired by Milk. The LED light installation atop the 75 foot tall structure would span 40 feet in length. It would be in Caslon's Egyptian Bold typeface, which Rhonda Rubinstein, the creative director of the California Academy of Sciences, helped to pick out.

The visual arts committee of the city's arts commission voted February 19 to approve the Milk lighted art piece for the bandshell facade. And at its meeting Thursday (February 20) the rec and park commission unanimously voted 7-0 to also support the quote being part of the larger bandshell improvements.

Allan Low, the oversight panel's vice president, said he saw no reason why it shouldn't be approved. The wording's message of "equity and inclusiveness" is something all San Franciscans should embrace, he argued, "especially given this is a quote by Harvey Milk and the National AIDS Memorial Grove is in Golden Gate Park. I think it is important to include this lettering."

As part of the rec and park commission's vote to include the quote, it directed the department's staff to return to the historic preservation commission in order to address the concerns it had raised. That body will take up the matter again when it meets March 18.

"We are keeping hope alive in this process as well," Ben Davis, Illuminate's founder and chief visionary officer, told the Bay Area Reporter following the rec and park commission's decision.

Davis said he hopes to be able to meet individually with the members of the Historic Preservation Commission in the coming weeks to better explain the concept behind the lighted quote and why it should be added to the bandshell facade.

Gay former District 9 supervisor David Campos, whose idea to name the city's airport after Milk was rejected but led to the naming of its Terminal 1 after the gay icon, told the B.A.R. February 20 he hopes the historic preservation commissioners will reconsider their decision.

"I'm happy to hear that Harvey Milk's quote was approved," Campos said in response to the rec and park oversight body's vote. "Harvey Milk is an integral part of San Francisco history and I hope the Historic Preservation Commission recognizes that fact and approves this as well."

Panel calls lighted artwork distracting
At its meeting Wednesday, February 19, the Historic Preservation Commission voted 5-0 to approve everything proposed for the bandshell except the tribute to Milk. Commissioner Jonathan Pearlman, a gay man and local architect, said he found the lighted art piece to be "really inappropriate" and "very jarring."

"I don't see how it enhances the project in any way," he said. "It is completely unrelated to the music. I don't feel the sign is appropriate. I would advocate for the sign not being there."

Commissioner Richard Johns, a local attorney and historian, agreed that the quote attributed to Milk detracted from the improvements being proposed for the bandshell.

"It adds a certain tackiness that is not best added," he said. "Whoever thought that ought to have rethought it."

Speaking to the commissioners, Davis argued that reminding people to keep hope alive "is a very powerful necessity and not just a commodity" in today's current political climate. The message that Milk was conveying, he added, will "come through loud and clear with every single performance. It adds gravitas to the performers on the stage."

Yet his argument failed to sway Pearlman, who did praise Illuminate's light installation on the Bay Bridge for celebrating that structure. But in terms of the bandshell, he said he felt its proposed artwork wouldn't have the same effect.

Commissioner Chris Foley, a preservation professional, initially expressed support for the lighted artwork but in the end voted to reject it.

"Their vision is one large vision and I am supportive of it. I personally think the sign is OK," said Foley.

Commissioner Kate Black, a real estate professional, said she felt Foley's point was a valid one. But she was also persuaded by the concerns expressed by Pearlman and Johns as for why the lighted quote should not be approved.

"This is an artistic vision and this has been thought through at great length. But I am also very persuaded by the notion that this sign ... and Harvey Milk was an incredibly important person in the history of San Francisco and his message is important to remember forever," she said. "But I do see this particular sign being distractive and I think even distractive during a performance. If I was a seated person in the audience, I would wonder why this brightly lighted sign is there."

As it works to persuade the historic preservation commissioners to rethink their vote, Illuminate will press ahead on installing the other lighting, sound equipment, and new risers for the bandshell so they are in place in April for events being planned to mark Golden Gate Park's sesquicentennial. Davis told the B.A.R. that if the Milk quote is approved next month, it too should be ready to be installed in time for the 150th anniversary celebrations.

The total cost for the bandshell project is $800,000 and it is being paid for by private funds. Davis told the B.A.R. earlier this month that Illuminate has $150,000 yet to raise, which he noted was fitting in light of the park's anniversary year.

If approved, the art piece would be installed for two years and be illuminated during the evenings, though Davis has told the B.A.R. he hoped the public would embrace seeing it become a permanent addition to the bandshell.