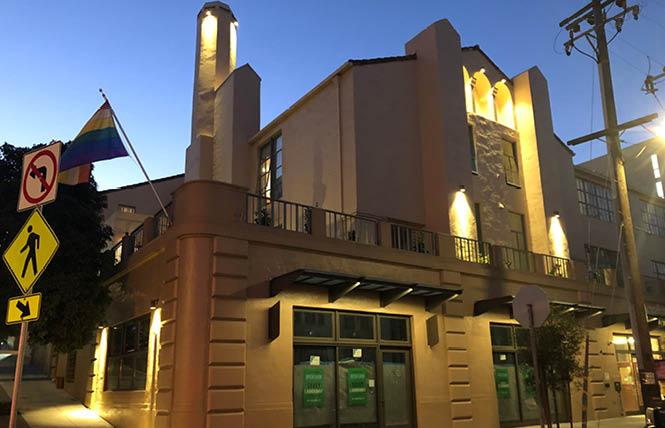 The last remaining vacant space at San Francisco's LGBT senior housing development has been leased to a nearby eco-friendly cleaner that will be adding coin laundry machines for its customers and residents in the area when it relocates next month.

Savvy Green Cleaners will be leaving its storefront at 1890 Market Street after 11 years to basically move across the street into the 2,500 square foot corner ground floor retail space at Laguna and Hermann streets. It is in the former college building at 55 Laguna that is now part of the 119-unit LGBT-welcoming affordable senior housing project that Openhouse, a nonprofit provider of LGBT senior services in San Francisco, partnered on with affordable housing developer Mercy Housing.

The retail component of the project has been vacant since the first residential units opened at 55 Laguna in late 2016. The rest of the building's ground floor spaces now house Openhouse's Bob Ross LGBT Senior Center, named after the Bay Area Reporter's founding publisher.

Last year, the residents of the project's newly built housing at 95 Laguna moved into their apartments. The building will also have 7,000 square feet of community space for Openhouse to utilize, but the agency ran into construction delays last year and now expects to have access to the additional space by April.

Savvy Green Cleaners owner Hisun Kang told the B.A.R. Friday (February 7) that she hopes to have relocated into her new storefront by March. There should be no disruption in service for her customers due to the relocation, she said.

"It will be better quality and better service. This building is very old," Kang said of her current location.

For nearly three years she had looked for a new storefront in the area but couldn't find anything affordable, telling the B.A.R. the asking price for the rents were too expensive. She ended up signing a lease of more than 10 years for the new retail space, which is overseen by Mercy Housing.

As customers learn about her relocating the business, Kang said, "People are excited."

She decided to add coin laundry machines since the new location is bigger than her current space and several laundromats that had been open in that area of upper Market Street have closed in recent years. In one example, the Little Hollywood Launderette for decades had been at 1906 Market Street on the next block up from Savvy Green Cleaners.

But it lost its lease and was forced to close in order to make way for the Scandinavian eatery Kantine, which opened in June 2018. It is adjacent to the Orbit Room bar and has helped activate that intersection of Market, Laguna, and Hermann streets during the earlier half of the days it is open.

"A couple laundromats have gone because of losing leases," noted Kang. "I was asking my customers if I should have a laundromat, and they said it would be great."

In addition to adding the coin laundry machines, Kang will continue to offer her wash and fold service as well as alterations and dry cleaning. As Savvy Green Cleaners notes on its website, it is a 100% organic dry cleaners.

"We are eco-friendly, that is a very important issue," Kang said.