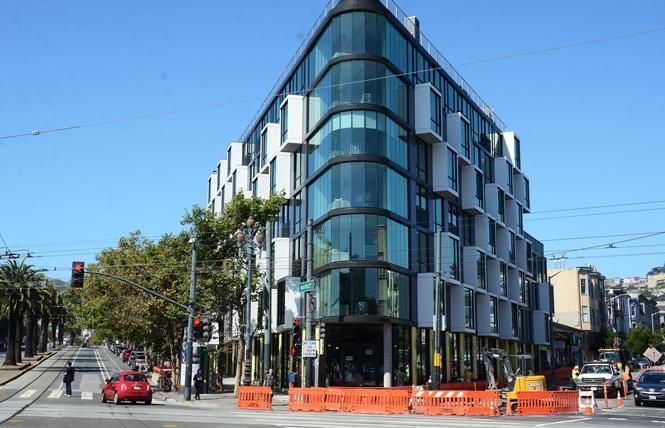 The lottery is now open for eight affordable apartments in the new building at 2100 Market Street. Photo: Rick Gerharter

The city is now accepting applications from those eligible to move into eight affordable apartments in the LGBT Castro district. The residents will be selected by a lottery draw to be conducted January 7.

The five 1-bedrooms and three 2-bedrooms are located at 2100 Market Street, the new building constructed by local developer Brian Spiers at a prominent corner parcel at the intersection with Church and 14th streets. The monthly rents for the units range from $1,293 to $1,440.

Applications are due by 5 p.m. Tuesday, December 17, and can be filed online here or downloaded from the website and mailed in by that date. It is a rare opportunity to apply for a brand new below-market-rate apartment in the city's LGBT district, as few such rental units have been built in the area in recent years.

The website for the lottery notes that people should not apply online and then mail in a paper application. It stresses that "all applications" from a person who appears on more than one application will be removed from the lottery.

The building has no parking spaces and is situated above the Church Street Muni Station. Across the street is the Safeway shopping center and on the other side of Market Street a short walk away is a Whole Foods.

As the Bay Area Reporter noted in September, Sterling Bank wants to move its branch currently located in a storefront next to 2100 Market Street into the new building's corner retail space. It will need approval from the city's planning commission in order to do so and is expected to face opposition from those opposed to seeing financial institutions open in such prominent locations in the city's commercial districts.

The leases for the 52 market-rate apartments in the building are being handled by a hospitality startup and rented out as furnished extended-stay apartments. When the news broke this summer, it led to scathing criticism for Spiers and calls for new rules to rein in such rentals.

District 3 Supervisor Aaron Peskin introduced such legislation in late October. As the San Francisco Examiner reported, it would amend the city's planning code to add a new "residential use" characteristic, called "intermediate length occupancy," in an effort to define corporate rentals.

Spiers had defended his partnering with the San Francisco-based startup Sonder, since he doesn't employ people who manage rental units. Both he and the company claimed most of the units would be rented for more than six months to up to a year with an option to renew.