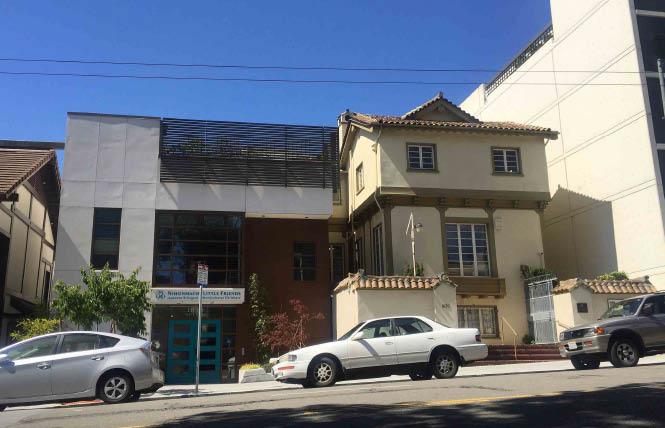 A property in San Francisco's Japantown that has ties to the early LGBT rights movement has won support from a state panel to receive federal historic status. City preservation officials and the property owners would like to list the building on the National Register of Historic Places.

The State Historic Preservation Officer must now approve listing the sites on the National Register and forward it on to federal officials. The Keeper of the National Register in Washington, D.C. makes the final determination within 45 days after receipt of the nomination from the state officer.

The Japantown site would become only the fourth property on the West Coast listed on the national register due to its place in LGBT history. The most recent to be listed was the San Francisco Women's Building last year. There are a little more than two-dozen LGBT properties across the country given such federal recognition.

California's State Historical Resources Commission voted 8-0 Thursday morning (November 7) to endorse the historic designation for the 1830 Sutter Street property, known as the Japanese YWCA/Issei Women's Building. It was one of 10 federal historic designation nominations that the panel was expected to support at its meeting held in San Bernardino.

The obscure state panel, part of the California Department of Parks and Recreation, noted in a brief summary about the San Francisco property that it "is the only building purpose-built by and for Issei (first generation) Japanese American women in the United States. The property is associated with their struggles and accomplishments as well as with the fight for African American civil rights and homosexual rights."

San Francisco's Historic Preservation Commission had voted last month in support of national register listing for the historic site. Famed architect Julia Morgan designed the building, pro bono, for a group of Issei women as they were barred from using the YWCA's other facilities.

"It is exciting to me to be able to see a nomination that recognizes multiple histories associated with a place," Graves told the Bay Area Reporter ahead of Thursday's vote. "The more obvious history is of its ties to the Japanese community. But we also uncovered the site's ties to LGBTQ and African American history. It is gratifying this will be memorialized with recognition on the national register."

A public historian based in Berkeley, Graves co-wrote the historic context statements for both San Francisco's Japantown and LGBTQ community. She was hired by the city to prepare the nomination for the Japantown YWCA building, which is now occupied by the private, nonprofit child care center Nihonmachi Little Friends.

As the B.A. R. noted in a 2016 story, the planning department received a $55,000 Underrepresented Communities Grant from the Department of the Interior to pursue listing three city properties on the National Register of Historic Places. The Japantown building was one of the sites chosen, as was Glide Memorial United Methodist Church in the Tenderloin, which also has a strong connection to the local LGBT community.

In her nomination report for the Japantown Y, Graves noted that because of discriminatory property rights laws in California, the San Francisco YWCA held the title to the property in a trust for the Japanese American women. Then, due to the internment of Japanese Americans during World War II, the building came under the umbrella of the American Friends Service Committee.

"Rustin, like most gay men of his generation, was extremely discreet about his homosexuality. As a black man with a history of leftist activism, including membership in the Young Communist League, Rustin was especially vulnerable to the harassment and stigma that being gay in mid-20th century America drew," noted Graves.

According to a history of the Japanese bilingual child care provider posted to its website, when it bought the historic building in March 2002, amid a settlement of a lawsuit the community had filed in an effort to save the building after the local YWCA had put it up for sale, it agreed as part of the purchase agreement it had a "responsibility to protect and promote the historic legacy of its Issei (first generation) women founders."