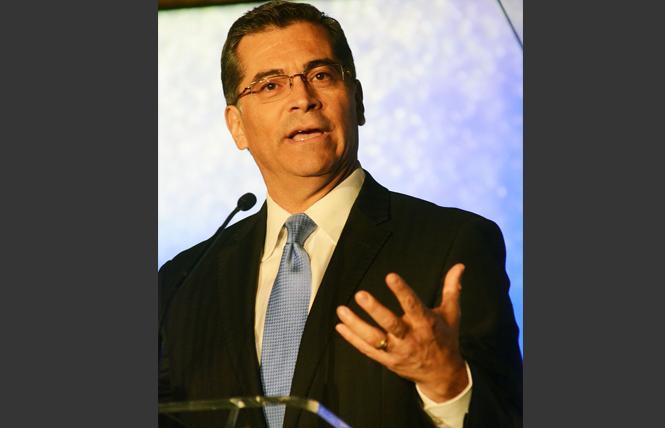 California Attorney General Xavier Becerra on Friday announced that the state will no longer allow taxpayer funds to be used for state employees to travel to Iowa. Photo: Rick Gerharter

California will no longer allow taxpayer funds to be used for state employees to travel to Iowa due to the state's implementation of a discriminatory transgender law.

California Attorney General Xavier Becerra announced Friday that the Hawkeye State would become the 11th state on the banned travel list. The prohibition on Iowa travel will take effect October 4.

It is due to the enactment by Iowa lawmakers of House File Bill No. 766 (HF 766) on May 3 of this year. The bill repealed existing protections under the Iowa Civil Rights Act that previously ensured Medicaid coverage for gender-affirming care. The new law makes it clear that coverage for this care is no longer required in Iowa, according to Becerra's office.

"The Iowa Legislature has reversed course on what was settled law under the Iowa Civil Rights Act, repealing protections for those seeking gender-affirming health care," stated Becerra. "California has taken an unambiguous stand against discrimination and government actions that would enable it. That's why my office is adding Iowa to the list of states subject to state-funded or sponsored travel restrictions."

This April Becerra added South Carolina to the list due to lawmakers in the Palmetto State in 2018 passing a budget bill that enabled private faith-based adoption agencies to deny placing a child with adoptive parents who do not conform to their religious beliefs or moral convictions, in particular LGBT people and same-sex couples.

Also on the list are Oklahoma, Texas, Alabama, Kentucky, South Dakota, Mississippi, North Carolina, Tennessee, and Kansas. San Francisco maintains its own banned list of states that have adopted anti-LGBT laws since 2015 that not only bans taxpayer-funded travel but also restricts city agencies from contracting with businesses based in those states.

The city is expected to follow Becerra's lead and add Iowa to its list, as the local list mirrors that of California's. Local officials had told the Bay Area Reporter earlier this year they were in touch with the attorney general's office about whether the Iowa bill triggered placement on the banned list due to AB 1887.

[UPDATE: San Francisco officials announced Tuesday, September 17, that Iowa will be added to the city's travel and contracting ban. According to the city's Office of Transgender Initiatives, the ban will be effective as of October 4.]

According to Becerra's review of the Iowa law, it superseded the decision by Hawkeye lawmakers in 2007 to add gender identity as a protected characteristic under the state's Civil Rights Act, which prohibits any owner or manager of a public accommodation from refusing or denying service to or discriminating against any person based upon listed protected characteristics. In March 2019, in Good v. Iowa Department of Human Services, the Iowa Supreme Court affirmed that Medicaid coverage for gender-affirming surgery was protected under the Iowa Civil Rights Act.

But two months after the ruling, Iowa Governor Kim Reynolds signed HF 766 into law, legislatively repealing the Iowa Supreme Court's decision. Based on his office's review of the law, Becerra concluded that HF 766 makes it clear that coverage for individuals seeking gender-affirming care is no longer required in Iowa.

His office pointed out that California has long permitted Medi-Cal reimbursement for gender reassignment-related care. In 1978, the California First District Court of Appeal found that gender-affirming treatment is medically reasonable and necessary and held that transsexual surgery is not cosmetic as defined under Medi-Cal regulations.

Also, noted Becerra, California law prohibits insurers from denying coverage for gender transition care if similar services are otherwise available to their other members, including, but not limited to, hormone therapy, hysterectomy, mastectomy, and vocal training.