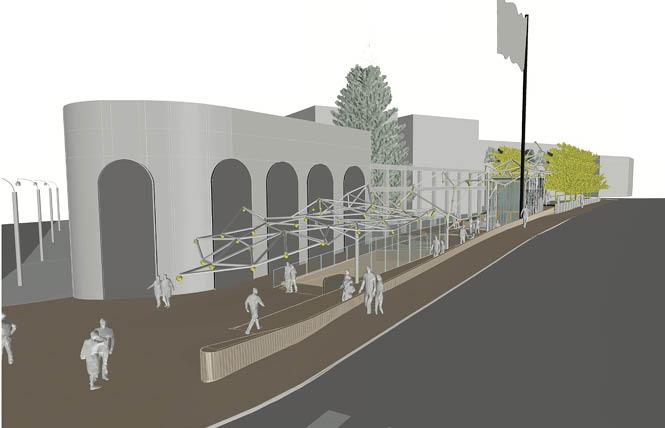 A new proposed structure for the Harvey Milk Plaza project would feature a canopy instead of the bleacher-like seating. Photo: Courtesy Perkins Eastman

The proposal to redesign a plaza dedicated to the late gay civil rights leader Harvey Milk in San Francisco's gay Castro district cleared its first hurdle Monday after proponents of the plan jettisoned an amphitheater that had been met with much derision.

At its meeting this afternoon, the arts commission's civic design review committee voted 4-0 in support of the new plans, which scrapped the raised seating area in favor of an amorphous canopy structure to be more fully designed at a later date.

"It was a drastic change," commented commissioner Lydia So, speaking favorably about the revised plans presented to the oversight body for the public parklet that sits above the Castro Muni station at the intersection of Castro and Market streets.

As the Bay Area Reporter noted in an article about the committee's previous hearing in October, several members of the oversight body had criticized the orientation for the planned seating area since it would face toward Twin Peaks and away from Castro Street. They also pointed out that the design would not protect users of the space from the elements, since the area is buffeted by strong winds that blow down from Twin Peaks.

The comments echoed similar criticisms expressed by San Francisco Chronicle design critic John King, who had panned the proposed plaza redesign in the newspaper the morning of the hearing. In addition to its facing into the wind, the bleacher-like seating also provoked objections due to its blocking the historic former bank building that fronts the plaza and being an inviting place for the homeless to congregate.

"It is a serious design issue that needs to be looked at again," Arts Commissioner Kimberlee Stryker, who chairs the committee, had warned the plaza proponents.

The initial design was thus overhauled, as the B.A.R. first reported online last Thursday, December 13, in hopes of winning over the arts commissioners. While the cantilevered seating area above the subway entrance is no longer part of the plan, it continues to call for rebuilding the stairway and escalator leading into the transit station.

It would be pushed further into the plaza area by 10 to 15 feet in order to create a larger gathering space and a new walkway along the edge of the 1922 Beaux-Arts building at 400 Castro Street designed by Edward Foulkes.

The existing sunken gardens would be raised to street level, creating a new belowground exhibit space adjacent to the Muni fair gates where Milk's story could be told. The first openly gay person to win elective office both in San Francisco and California, Milk was assassinated a year later on the morning of November 27, 1978 along with then-mayor George Moscone inside City Hall by disgruntled former supervisor Dan White.

In 1985, city leaders dedicated the Castro plaza as a memorial to Milk, a daily transit rider and vocal advocate for public transportation. Considered the front door into the city's gayborhood, the plaza has a small photo display and bronze plaque about Milk just outside the entryway into the Muni station's fare gate level.

The proposed canopy would start above a new glass protective shield over the station entrance. It would then extend over the shaft for a new elevator to be built at the plaza and end in front of a planned grove of 11 ginkgo trees representing each month that Milk held office.

At today's hearing, Stryker commended the plaza proponents for taking the committee's critique to heart and revising their plans. She, along with the other commissioners, voiced strong support for remodeling the plaza to not only better honor Milk but also to address a number of accessibility issues with the site.

They conditioned their support for the project, however, by requiring the design firm overseeing the remodel, Perkins Eastman, be significantly involved in designing the canopy structure they are proposing and not farm out its look to an artist.

"We don't want this project to fail," said Stryker. "We want to make sure it is a success and not dependent on the art."

The controversial project, which faces strong opposition and continues to lack a funding source to pay for its estimated $17 million price tag, is a long way from being approved by city officials. The final design still requires approval from the full arts commission, the planning commission, transit leaders, and likely the Board of Supervisors.

Howard Grant, a gay man who designed the existing plaza and transit station, has been one of the most vocal critics of seeing his work be bulldozed. He was among a handful of people who spoke out against the current plans at today's hearing.

Rather than razing the existing plaza, Grant argued it could be enhanced to achieve the goals of those wanting to better honor Milk and also an entrance into the Muni station that is more accessible.

"Why can't we have a win/win solution?" he asked.

Longtime LGBT activist Ken Jones argued, however, that because "the current plaza has so many challenges," a completely new design is in order.

"We have a dream to build a monument," Jones said, that properly memorializes Milk and is a world-class destination that "people will visit."

The Bay Area Reporter will have more on today's hearing vote in Thursday's paper.