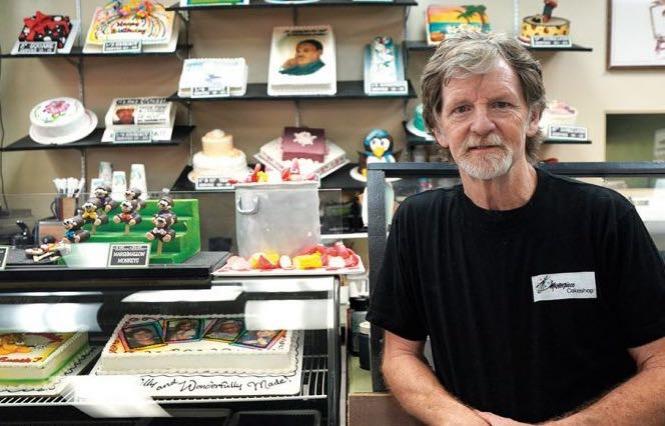 In a what one legal activist characterized as "dangerous encouragement to those who would deny civil rights to LGBT people," the U.S. Supreme Court ruled 7-2 Monday (June 4) in favor of a Colorado baker who refused to sell wedding cakes to same-sex couples the same as he sells to male-female couples.

While Lambda Legal Defense and Education Fund Chief Executive Officer Rachel Tiven said the ruling offers "dangerous encouragement to those who would deny civil rights to LGBT people and people living with HIV, " the American Civil Liberties Union said the majority opinion "reaffirmed the core principle that businesses open to the public must be open to all."

Shannon Minter, legal director for the National Center for Lesbian Rights, said the decision was "narrow" and "does not break any new constitutional ground or create any new religious or free speech exceptions to anti-discrimination laws."

Law professor Tobias Barrington Wolff said "the majority's reasoning has many implications," including the likelihood that "litigants will try to apply the court's analysis to other forms of discrimination or unfavorable treatment by state authorities (based on race, sex, national origin), and lower courts may entertain those arguments."

The Alliance Defending Freedom, which brought the Masterpiece Cakeshop appeal, was unequivocal: "This is a big win - not just for Jack [Phillips], but for every American who values freedom."

The decision
In writing for the majority, Justice Anthony Kennedy accepted Colorado baker Jack Phillips' claim that selling a wedding cake requires the use of his "artistic skills to make an expressive statement, a wedding endorsement in his own voice and of his own creation." Kennedy also noted that, in 2012, when Phillips refused to sell a cake to the gay couple, Colorado law banned recognition of marriage between same-sex couples.

"At the time of the events in question, this court had not issued its decisions either in United States v. Windsor [striking down a key provision of the federal Defense of Marriage Act] or Obergefell [striking state bans on marriage for same-sex couples]. Since the state itself did not allow those marriages to be performed in Colorado, there is some force to the argument that the baker was not unreasonable in deeming it lawful to decline to take an action that he understood to be an expression of support for their validity when that expression was contrary to his sincerely held religious beliefs, at least insofar as his refusal was limited to refusing to create and express a message in support of gay marriage, even one planned to take place in another state."

As he did during oral argument, Kennedy also put considerable emphasis on his interpretation of how the Colorado Civil Rights Commission handled the complaint against Phillips. He said the commission demonstrated "clear and impermissible hostility toward the sincere religious beliefs that motivated his objection." His evidence was two-fold: that the commission did not take adverse action against bakers who had refused to create cakes with anti-LGBT messages, and that a member or members of the commission made remarks he construed to be hostile toward Phillips' expressed religious beliefs.

But LGBT legal activists, for the most part, were inclined to focus their reaction Monday to the majority decision's inclusion of language signaling an acceptance that civil rights laws should and must protect LGBT people from discrimination.

"Our society has come to the recognition that gay persons and gay couples cannot be treated as social outcasts or as inferior in dignity and worth," wrote Kennedy. "For that reason the laws and the Constitution can, and in some instances must, protect them in the exercise of their civil rights."

While "the religious and philosophical objections to gay marriage are protected views and in some instances protected forms of expression," wrote Kennedy, "... it is a general rule that such objections do not allow business owners and other actors in the economy and in society to deny protected persons equal access to goods and services under a neutral and generally applicable public accommodations law."

"... [A]ny decision in favor of the baker would have to be sufficiently constrained," said Kennedy, "lest all purveyors of goods and services who object to gay marriages for moral and religious reasons in effect be allowed to put up signs saying 'no goods or services will be sold if they will be used for gay marriages,' something that would impose a serious stigma on gay persons."

That means, "the baker won the battle but lost the war," said James Essex, director of the LGBT project of the ACLU, which represented the Colorado couple who brought the complaint against the baker.

"This was not the result we were looking for," said Essex, but the baker "did not get a constitutional license to discriminate."

While Essex said there were no plans to re-visit this case with the Colorado commission, he said any same-sex couple who now seeks to buy a cake from the baker might reasonably file a complaint with the commission if the baker refuses them service and hope for a good outcome.

"Although ruling for the baker, the [Supreme] Court recognized the importance of protecting the dignity of LGBT people," said Jocelyn Samuels, executive director of the Williams Institute at UCLA School of Law, "and affirmed states' general authority to bar sexual orientation discrimination by businesses that serve the public."

In addition to Kennedy and the court's conservative justices (Chief Justice John Roberts and Justices Samuel Alito and Neil Gorsuch), two of its more liberal members -Justices Stephen Breyer and Elena Kagan - voted with the majority. (Clarence Thomas did not sign onto the majority decision but filed his own opinion, concurring in the judgment.)

A split among the progressives
Justice Ruth Bader Ginsburg wrote the dissent for herself and Justice Sonia Sotomayor. Ginsburg found fault with the majority's reliance on the remarks of commission members and the different outcome in complaints involving other bakers. She noted that the gay couple who approached Masterpiece Cakeshop did not seek any particular message "or anything else distinguishing" on their cake.

"When a couple contacts a bakery for a wedding cake, the product they are seeking is a cake celebrating their wedding - not a cake celebrating heterosexual weddings or same-sex weddings - and that is the service Craig and Mullins were denied," said Ginsburg, referring to the couple, David Mullins and Charlie Craig. The baker in the Masterpiece case, she said, "declined to make a cake he found offensive where the offensiveness of the product was determined solely by the identity of the customer requesting it."

Ginsburg also said she could "see no reason why the comments of one or two commissioners should be taken to overcome Phillips' refusal to sell a wedding cake" to the gay couple.

During last December's oral argument, Kennedy expressed consternation with a remark made by a member of the Colorado Civil Rights Commission during its deliberation - a remark that Kennedy construed to be intolerant of religious beliefs. The commission member is quoted to have said: "Freedom of religion and religion has been used to justify all kinds of discrimination throughout history, whether it be slavery, whether it be the Holocaust ... we can list hundreds of situations where freedom of religion has been used to justify discrimination. And, to me, it is one of the most despicable piece of rhetoric that people can use -to use their religion to hurt others."

Kagan and Breyer, two who are usually on the side of equal treatment for LGBT people, said they concurred with the majority that the commission exhibited "religious hostility" to Phillips' view that the Bible opposes marriage for same-sex couples.

Preparing for the next battle
In a telephone news conference after the decision was released, Mullins who, along with spouse Craig, filed the original complaint against baker Phillips, said he was "disappointed" with the ruling but that he hopes "people can understand that this is not a wide-ranging ruling and it doesn't mean the [state law prohibiting discrimination based on sexual orientation] was invalidated in any way."

Mullins and Craig were living in Colorado but married in Massachusetts in 2012, when the U.S. Supreme Court had not yet struck down state bans against marriage for same-sex couples. After Phillips refused to sell them a cake for their reception, they posted a message on Facebook about the incident and then learned that state law prohibits discrimination based on sexual orientation. That's when they filed a complaint with the Colorado Civil Rights Commission.

A state administrative judge, the Colorado Civil Rights Commission, and the Colorado Court of Appeals all ruled for the couple and against Phillips. The commission did not order Phillips to design cakes for same-sex weddings, but rather ordered that he stop "refusing to sell [to same-sex couples] wedding cakes or any product [the baker] would sell to heterosexual couples."

Colorado and 20 other states have laws prohibiting sexual orientation discrimination in public accommodations and other areas, such as employment and housing.

Rea Carey of the National LGBTQ Task Force said that, while she is "concerned that the court's action will lead to future cases that may weaken the rights of LGBTQ people," she takes "solace in the fact that in Justice Kennedy's ruling he reminded everyone that religious objections alone do not grant a right to deny services to others."

Wolff said the majority's reasoning has "many implications," including the likelihood that "litigants will try to apply the court's analysis to other forms of discrimination or unfavorable treatment by state authorities (based on race, sex, national origin), and lower courts may entertain those arguments."

"This is a deeply disappointing day in American jurisprudence," said Tiven, but added that her organization "will fiercely resist the coming effort that will seek to turn this ruling into a broad license to discriminate."

Analysis: Understanding Fulton: The decision dodged a bullet
Sign up!