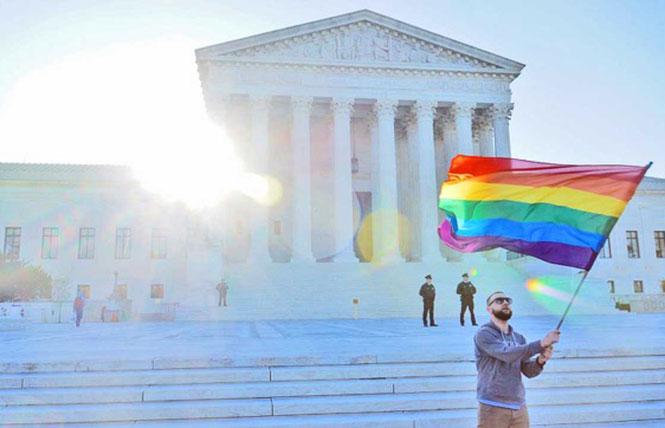 A person waves a rainbow flag outside of the U.S. Supreme Court. Photo: Scott Drake

June 30, 1986 was a broiling hot day in Washington, D.C. when the U.S. Supreme Court released the decision in Bowers v. Hardwick, a landmark sodomy decision. The press was huddled under the small bank of trees near the side entrance, waiting for the copies to be handed out. The fate of millions of lesbian and gay Americans laid in the hands of the high court.

The controversial case involved consensual sex between Michael Hardwick and a companion in the privacy of his own home. An Atlanta police officer, Keith Torick, was serving an invalid warrant for a ticket when he entered Hardwick's apartment, burst into his bedroom, and found him engaged in oral sex. Torick arrested Hardwick and the companion, charging them with sodomy. At the time, the charge carried a sentence of up to 20 years in prison.

Hardwick sued the state of Georgia, asserting that as a non-celibate gay man, his rights were infringed upon by the existing sodomy laws. A federal appeals court found in Hardwick's favor and Michael Bowers, the Georgia attorney general, took the case to the U.S. Supreme Court.

The court found 5-4 for Bowers. Justice Byron White wrote the majority opinion upholding the sodomy laws. White said the Constitution did not support "a fundamental right to engage in homosexual sodomy."

Chief Justice Warren Burger issued a virulently homophobic concurring opinion in which he asserted that homosexual sodomy was an "infamous crime against nature," worse than rape, and "a crime not fit to be named." Burger wrote, "To hold that the act of homosexual sodomy is somehow protected as a fundamental right would be to cast aside millennia of moral teaching."

Justice Lewis Powell also wrote a concurrence. Later Powell would say he should have voted the other way, but did not realize the import of the case at the time. Justices William Rehnquist and Sandra Day O'Connor voted with the majority.

Justice Harry Blackmun's dissent accused the court of an "almost obsessive focus on homosexual activity" and an "overall refusal to consider the broad principles that have informed our treatment of privacy in specific cases."

Blackmun wrote of Burger's religious commentary, "That certain, but by no means all, religious groups condemn the behavior at issue gives the state no license to impose their judgments on the entire citizenry. The legitimacy of secular legislation depends, instead, on whether the State can advance some justification for its law beyond its conformity to religious doctrine."

Blackmun was joined in his dissent by William Brennan, Thurgood Marshall, and John Paul Stevens, who also wrote his own dissent in the case.

When the decision was handed out to the press, Blackmun, then 78, made the unprecedented move of coming out to speak about how wrong he felt the decision was. Blackmun had authored the landmark Roe v. Wade case and his dissent was predicated on what he argued in both cases: a fundamental right to privacy.

Seventeen years later, in 2003, the court heard arguments in Lawrence v. Texas. Like Hardwick, the case centered on another consensual relationship, this time at odds with a Texas law that classified consensual, adult homosexual intercourse as illegal sodomy. John Geddes Lawrence and Tyron Garner argued that Texas violated the privacy and liberty of adults to engage in private intimate conduct under the 14th Amendment.

In a 6-3 decision, a very different court than had voted on Hardwick declared that the court had gotten it wrong in 1986. Only three justices remained from the original ruling: Rehnquist, O'Connor, and Stevens. Finding for the majority were Anthony Kennedy, Ruth Bader Ginsburg, Stephen Breyer, David Souter, O'Connor, and Stevens. The dissents were Rehnquist, Clarence Thomas, and Antonin Scalia.

Writing for the majority, Kennedy declared, "The petitioners [Lawrence and Garner] are entitled to respect for their private lives. The state cannot demean their existence or control their destiny by making their private sexual conduct a crime."

O'Connor voted with the majority, but in a dissent, argued against overturning Hardwick, asserting that the Texas state law violated the equal protection clause because it criminalized male-male but not male-female sodomy and that should be the court's rationale in finding for Lawrence and Garner against Texas.

In his angry dissent, Scalia wrote "Today's opinion is the product of a court, which is the product of a law-profession culture, that has largely signed on to the so-called homosexual agenda, by which I mean the agenda promoted by some homosexual activists directed at eliminating the moral opprobrium that has traditionally attached to homosexual conduct. ... [T]he court has taken sides in the culture war, departing from its role of assuring, as neutral observer, that the democratic rules of engagement are observed."

Both Scalia and O'Connor argued that the breadth of Kennedy's opinion opened the door to same-sex marriage. And a decade later, Scalia was proved correct: Kennedy wrote the opinion in 2015's Obergefell v. Hodges, which legalized same-sex marriage in all 50 states and the District of Columbia.

Scalia's comments in Lawrence v. Texas were again invoked by conservatives unhappy with the court's ruling in Bostock v. Clayton County, Georgia in June, which granted LGBTQ people protections against employment discrimination. But that 6-3 decision, written by conservative Justice Neil Gorsuch, is predicated upon previous cases the court has rendered on gay rights, as well as previous employment discrimination cases such as Oncale v. Sundowner Offshore Services.

Scalia himself wrote the unanimous opinion in Oncale in 1998. That case, which concerned the sexual harassment of an oil rig worker, determined that a male can be discriminated against by members of the same sex under Title VII. Oncale found that any discrimination based on sex is actionable if it places the victim in an objectively disadvantageous working condition, regardless of the gender of the victim or the person doing the harassing.

Court moves slowly on LGBTQ rights
The court continues to move forward — albeit slowly — on LGBTQ rights issues. But as was the case in Hardwick, religion continues to infringe on LGBTQ rights. The court has found in favor of business owners claiming religious freedom not to serve lesbian and gay clientele in several recent cases. And in Bostock, Gorsuch notes that religious employers may challenge the ruling.

But since Hardwick was overturned, in Lawrence, Obergefell, Bostock, and laterally, Oncale, even conservative justices — notably Kennedy, who retired in 2018, and Gorsuch — have found there is a constitutional basis for LGBTQ rights.

Whether that will change in the next few months is now a question. The case law of Ginsburg, the court's most liberal justice for the past quarter century, set a foundation for gender-based legal arguments that have been the predicate for much of the ensuing LGBTQ rights cases. But Ginsburg's sudden death in September opened a seat on the Supreme Court.

Barrett has demonstrated bias against LGBTQ rights in her words, texts, and recent rulings. She defended the Supreme Court's dissenters in Obergefell v. Hodges, asserting that the court had no business deciding the case and that it belonged in the hands of voters.

Barrett's originalism stance is also highlighted in her transphobic responses to other cases. She has said that Title IX protections under the 1964 Civil Rights Act do not extend to trans people, asserting it is "a strain on the text" to reach that interpretation. She likely would have opposed Bostock v. Clayton County, Georgia.

Equally concerning is her misgendering of trans people, including referring to trans women as "physiological males," while also questioning how there can even be a case for transgender rights.

On November 4, the Supreme Court will hear Fulton v. City of Philadelphia, a case that could allow private agencies that receive taxpayer-funding to provide government services, such as foster care providers, food banks, homeless shelters, and more, to deny services to people who are LGBTQ.

The nexus of the case stems from the discovery by the city of Philadelphia in March 2018 that two agencies the city hired to provide foster care services to children in the city's care would not, based on their religious objections, accept same-sex couples as foster parents. The noncompliance with the city's non-discrimination ordinance led to the lawsuit due before the court.

Fulton is a lawsuit that Barrett may very well decide, or a case that will be decided by a 4-4 court. At the heart of the case is whether or not religious groups have a right to cite religious freedom as their rationale for anti-LGBTQ bias. In recent years the court has found frequently for businesses that refuse services to LGBTQ people on the basis of religious beliefs.

In the 2018 case Masterpiece Cakeshop v. Colorado Civil Rights Commission, the court found 7-2 for the bakery that refused a gay male couple's request for a wedding cake. The dissent was written by Ginsburg, with Justice Sonia Sotomayor concurring.

Opposition to LGBTQ equality and municipal and state laws barring discrimination have sent religious groups to seek remedies in the courts for what the American Civil Liberties Union has called a "far-reaching constitutional license to discriminate in the name of religion."

Over 1,000 people have joined amicus briefs in Fulton v. City of Philadelphia, including multiple child welfare groups, religious organizations, former foster youth, and nearly half of the states and dozens of cities and mayors. A vote against LGBTQ people in Fulton could have staggering consequences for American social safety net programs for many vulnerable groups.

If LGBTQ people thought the landmark employment discrimination case of Bostock v. Clayton County, Georgia set the court on a new trajectory, Fulton, the confirmation of Barrett, and the impending shift to a 6-3 conservative court suggests a whole new battle for LGBTQ civil rights may have just begun.