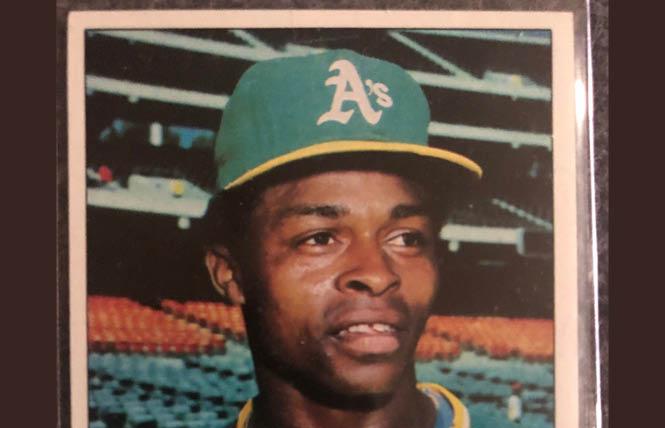 You could say that Glenn Burke, the first Major League Baseball player to come out, is having a good season.

In March, bestselling author Andrew Maraniss published a new biography called "Singled Out: The True Story of Glenn Burke." And on June 11, the Oakland Athletics, for which Burke once played, renamed their annual LGBTQ appreciation event the Glenn Burke Pride Night, as the Bay Area Reporter and other outlets reported.

Unfortunately, Burke isn't here to enjoy the acclaim. He died from complications of AIDS in 1995, at the age of 42. He played four seasons of professional baseball between 1976 and 1979, hitting .237 and stealing 35 bases, before homophobia ended his career.

"Prejudice drove me out of baseball sooner than I should have," Burke told Jennifer Frey of the New York Times in 1994. "But I wasn't changing. And no one can say I didn't make it. I played in the World Series. I'm in the book, and they can't take that away from me. Not ever."

Burke seemed destined for the pros. At Berkeley High School in California, he was good on the baseball diamond and even better on the basketball court. According to a comment in the 2010 documentary "Out: The Glenn Burke Story," from his childhood friend Vince Trahan, "Glenn did moves in 1970 that Michael Jordan did in 1991." In 1970, the team went undefeated, and Burke was named Northern California's Player of the Year.

Considering that, family and friends were surprised when Burke signed with the Los Angeles Dodgers rather than aiming for the NBA. But in the early 1970s, baseball was still the national pastime.

Between 1972 and 1976, Burke worked his way up through the minor leagues. In 1973, he batted .309 and stole 42 bases, more than any other player in the Florida State League, according to the documentary.

Burke's teammates were impressed. "In baseball language, eight is outstanding," Larry Corrigan said in the documentary. "That's as high as you can go. And Glenn had an eight arm; he had eight raw power; and he was an eight runner."

In 1976, Burke played a few games for the Dodgers at the beginning and end of the season. His athleticism was apparent, but he needed to work on his bat. Still, Junior Gilliam, the team's hitting coach, saw unlimited potential in the phenom, according to the 1982 Inside Sports article in which Burke came out. "Once we get him cooled down a little bit, frankly, we think he's going to be another Willie Mays," he said.

If Burke was having trouble with the curve, he was struggling even more in his personal life. Until the age of 22, he was a "sexual blank," as Michael J. Smith put it in "The Double Life of a Gay Dodger," the 1982 Inside Sports article. Then he reconnected with a former high school teacher.

"The minute he spoke, l knew," Burke recalled in the article. "I know it sounds a little crazy. Here I was, 22, no sexual experience, nothing. Yet I felt something I'd never felt before, something deep." Burke knew instantly that he was gay. He also worried that it would hurt his career.

When the Dodgers called Burke up for the 1977 season, there was no time to fret. The squad, packed with great players like Steve Garvey and Reggie Smith, had high expectations. With so many talented veterans, the rookie's playing time was limited, but his team spirit enlivened the locker room.

Burke is even credited with inventing the high-five. In the final regular season game, Dusty Baker walloped a pitch out of the park, making him the fourth Dodger that year to hit 30 home runs, a first in MLB history.

Waiting on deck, an exuberant Burke raised his hand high in the air. The burly outfielder reacted instinctively. "His hand was up in the air, and he was arching way back," Baker said. "So I reached up and hit his hand. It seemed like the thing to do."

Although the Dodgers eventually lost that year's World Series to the New York Yankees, it was a solid rookie season for Burke.

Personal life
By the following year, however, Burke's personal life had become an issue. During spring training, some Latino players began calling him "maricon," a Spanish language slur with the same weight as "faggot," the documentary notes. And the general manager, Al Campanis, purportedly offered Burke $75,000 to get married. (Campanis would go on to make racist comments on ABC's "Nightline" in 1987.)

According to Burke's sister, Joyce, it was hinted that if her brother married, his sexuality wouldn't become public knowledge. "And he told them, 'no,'" she said in the documentary. "He wasn't going to live that type of lie."

Less than two months into the season, Burke was traded to the Oakland A's. It should have been a triumphant homecoming for the Bay Area native. Unfortunately, the A's were an abysmal club, with management and player issues. Burke considered quitting and only returned the following year because Billy Martin was named manager.

If Burke thought he was going to get a fresh start, he was sorely mistaken. In the documentary, Claudell Washington, a former teammate, remembers everyone trotting out to center field at the beginning of spring training so that Martin could introduce the veterans: "And then he got to Burke. He said, 'Oh, by the way, this is Glenn Burke. And he's a faggot.'"

Quickly banished to a minor league club in Ogden, Utah, Burke had had enough. He quietly retired and returned to San Francisco's LGBTQ Castro neighborhood. There, he lived openly as a gay man, played on multiple softball teams, and enjoyed the nightlife.

To some, Burke was a local hero. As Jack McGowan, sports editor for the San Francisco Sentinel, a local gay newspaper at the time, put it, "It was not so much that he was masculine, but that he was superbly athletic, and we were proud because he showed the world that we could be gay and be gifted athletes."

But Burke had difficulty adjusting to life after pro sports. He partied too hard and had trouble earning a living. After being hit by a speeding car in 1987, he couldn't even play softball. Soon, he turned to petty crime and panhandling, the documentary notes. Whatever money he scrounged up went entirely to crack. Family and friends were unsurprised when he was diagnosed HIV-positive.

Burke's final years were difficult. When he could no longer survive on the street, he moved in with his older sister, Lutha Davis, the Times article noted. Wracked by pain and ravaged from the disease, he wore a winter parka over his skeletal frame year-round to ward off chills. He died on May 30, 1995.

Burke said in the Inside Sports article, "It's harder to be a gay in sports than anywhere else, except maybe president."

Much has changed since his death. Although homophobia still exists, LGBTQ people have gained more rights and acceptance than he could have possibly imagined. Undoubtedly, he'd be rooting for Las Vegas Raider Carl Nassib, the first NFL player to come out as gay while still playing.

Billy Bean, who is only the second MLB player ever to come out, probably summed up Burke's legacy better than anyone. After meeting almost 60 members of Burke's extended family, the current MLB vice president and special assistant to the commissioner posted a video to YouTube in 2020.

"It was easy to see the impact you made on every one of them, which had nothing to do with your baseball talent, and everything to do with the kind of person you were," Bean said.

Ray Simon is a writer from Philadelphia. His day job is working as an editor at Games World of Puzzles magazine. He writes about LGBTQ issues, local arts and culture, and crossword puzzles.