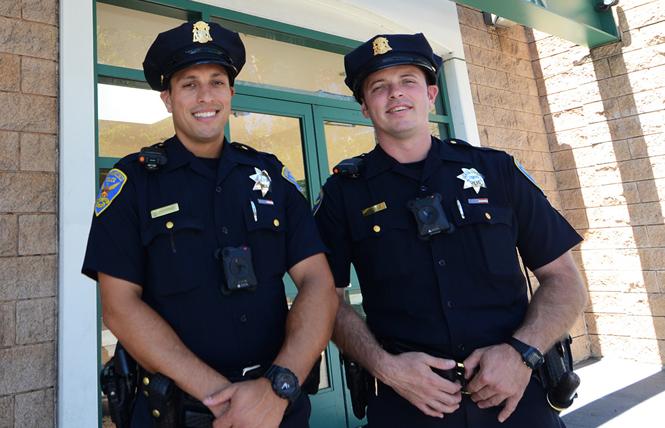 Some Castro business owners have been unhappy with the "lack of consistency" of the San Francisco Police Department's foot patrol officers. The officers are assigned to walk certain areas of the district at different times to help mitigate crime, loitering, and other issues.

Gaetano Caltagirone was named captain of SFPD's Mission Station, which oversees the Castro, last October. In his first months on the job, Caltagirone increased the beat officers' coverage of the Castro because of need, but he still receives complaints from merchants and residents who feel they never see the officers.

Currently, according to Caltagirone, the foot patrol officers work seven days a week. The Castro is assigned two beat officers per daily shift and has a regular group of about six officers who rotate shifts. One shift goes from 6 a.m. to 4 p.m., while the other is from 3 p.m. to 1 a.m.

During last week's Castro Merchants meeting, Caltagirone said he was working with his command staff on how to ensure a constant police presence on the streets of the Castro and other areas within his district. He would like to add a third shift from 11 a.m. to 7 p.m.

"I am trying to rearrange our staffing to get that extra foot beat up here," he said at the meeting.

In June, the Bay Area Reporter received an email from Kathy Amendola, longtime owner of Cruisin' The Castro Walking Tours, about the lack of beat cop presence in the area and the increased violent incidents with the homeless population.

"The current lack of consistency is absolutely unacceptable for both tourist and residents alike," said Amendola, in an email complaint she sent to Caltagirone and forwarded to the B.A.R. "They should be covering our neighborhood daily at 9 a.m. during our heavy commute when the bodies are most concentrated."

When the B.A.R. spoke with Amendola, however, she said although the current situation is concerning and affecting her business, she is working with Caltagirone and is pleased with his responsiveness and believes the beat cops are doing their job adequately.

"I do feel it is going in the right direction," Amendola, a lesbian, said.

A misconception about beat officers, Caltagirone said, is that when Castro residents and business owners don't physically see a beat officer, they assume they are not working.

Caltagirone explained that the officers do not have a specific area that they monitor every shift. If there have been more complaints from a specific area, their time is concentrated in that location.

As well, if the officers arrest someone, it can take them off the street for hours in order to complete the booking process and associated paperwork. When that happens, Caltagirone has asked that an officer in a patrol car be sent to the neighborhood to provide coverage.

Since he took over as captain and orchestrated the uptick in foot patrol coverage, the situation has improved, Caltagirone said.

"A presence of the police makes a big difference," he said. "When incidents occur it's nice to have the beat officers right there on scene."

The beat officers respond to loitering people who are often sleeping in the doorways of businesses, publicly intoxicated people, fights, and store break-ins, among other things.

The beat officers also always work in pairs, something Amendola initially thought was a waste of resources thinking they could cover more area if they were split up. But the captain reassured her that it's a safer and more efficient way to police the area.

"It's a safety issue," Caltagirone told the B.A.R. "Having two officers working together is safer than having one when they come up to an incident where someone has a knife or a weapon. With two officers, they are able to diffuse the situation more efficiently."

Although Amendola is happy with Caltagirone's response, she believes the city needs to dedicate more resources to decrease homelessness and clean up the tent encampments, drug needles, feces, and trash in the area.

"It's just so sad the condition of the neighborhood and the city," she said. "I am hoping the new mayor and supervisors will really take action."

Disrupting business
During her morning and afternoon tours, Amendola has experienced multiple incidents of violence from loiterers and homeless people, and so have her customers. In June, Amendola said a man in his early 20s approached her and began screaming close to her face while she was conducting a tour.

"I'm so lucky he didn't hit me. Not only was I shooken up, my entire group of 20 tourists were also," she said in her initial email complaint. "I now have to carry spray in my hand as I operate tours should myself or tour members are attacked!"

Another alleged incident happened when a man outside Cliff's Variety on Castro Street threw a paper bag containing items in it at the heads of two of her tour attendees. She also mentioned the tent encampments that covered some of the historical Rainbow Honor Walk sidewalk plaques, a stop on her tour.

"It's affecting my business. It's harming the city's reputation and image," she wrote.

Another Castro business owner whose business has been affected is Isam Dougham, owner of Rossi's Delicatessen, at 426 Castro Street. In the last four months, his front windows have been broken three separate times. Initially he reported the incidents to the police, but after nothing happened he stopped calling the cops.

"The city needs to spend more money on protecting the neighborhoods," Dougham told the B.A.R. in a previous interview. "A lot of windows have been broken in the Castro and nothing has been done. The cops come and say 'we are sorry that happened to you,' but we need more than that."

The Castro/Upper Market Community Benefit District provides services that improve the quality of life in the neighborhood, emphasizing clean, safe, and beautiful streets. Executive Director Andrea Aiello said the beat cops are very valuable to the community, but said the situation is still out of control.

"Everyone really appreciates when we see the beat cops walking, but, it's totally unacceptable," Aiello said, referring to the incidents Amendola has experienced.

The CBD, along with other Castro businesses, pay a fee to hire San Francisco Patrol Special Police officers to monitor specific areas. They are not sworn officers but are approved by SFPD. SFPSP is a privately owned entity. The officers carry firearms, wear uniforms, and can make arrests. The Castro currently has about five patrol special officers deployed in the neighborhood, according to Alan Byard, president of SFPSP.

Amendola, Aiello, and Dougham agree that these issues are not Castro-specific and that the city needs to be doing more to mitigate them. District 8 Supervisor Rafael Mandelman said, anecdotally, he feels there has been an increase in tent encampments in the Castro and that some homeless people are being pushed into the area due to crackdowns in other parts of the city.

"I am particularly looking at the Castro/Upper Market area," said Mandelman, a gay man, in a recent interview with the B.A.R. "I think people feel unsafe. I hear not just about seeing encampments that spring up, but actual physical violence."

He said that there needs to be housing for homeless people, particularly those with mental illness and substance abuse issues.

The captain and Mandelman are working closely together, and with other city departments, to focus on these issues in the Castro. Mandelman added that Caltagirone is doing a good job and has been very responsive to Mandelman's requests.

With a new San Francisco mayor and District 8 supervisor, the merchants said they are hopeful that crime and homelessness will improve in the area, but the condition as it stands, they say, is becoming increasingly dangerous.