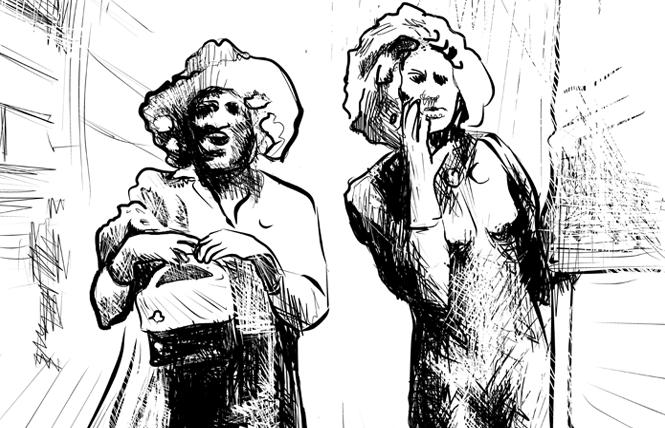 As I write this Sunday night, June 30, we're in the last waning hours of Pride Month 2019. There's still confetti, glitter, and the ruined remains of corporate handouts stuck in the nooks and crannies of the road, though much of it has already fallen victim to the machines of San Francisco Public Works. Pride has been put away from another year.

That said, much like the crushed and crusted items lining the gutter, the questions this Pride raised still linger. Like everything else in 2019, Pride finds itself amid questions, probed straight to the heart. What may remain may not be the same event.

A reminder is necessary. This year marks the 50th anniversary of a summer night at the Stonewall Inn in New York's Greenwich Village. The stories of that night, like any yarn, have grown over the years, with many people claiming their own narrative of that night at the bar.

What we do know is this: The police, as they had many times before, raided the bar, practicing yet another shakedown for cash. Regulars were unhappy, and after some ill treatment by officers, hit a flashpoint. Things were thrown. It soon boiled over into a riot between the LGBTQ people present at the Stonewall — as well as many others in the neighborhood — and the cops.

Among those to have been at Stonewall were Marsha P. Johnson and Sylvia Rivera, both either presumably transgender or gender-non-conforming — in modern parlance — people of color. Also, there was Stormé DeLarverie, a mixed-race butch lesbian who scuffled with the cops.

Other events came before the Stonewall rebellion, but this was the one that caught the public's imagination. A year after the riot, a parade was held to honor it. That parade was the progenitor of every Pride parade to come.

This attitude has ebbed and flowed over time. Transgender people were pretty firmly back into the fold after the 1980s. Leather and other such things, too.

At Sunday's event, my own very informal count saw a bit less than 10% of the crowd displaying a transgender flag, including yours truly. Likewise, genderqueer flags were plenty visible, as well as other gender-related flags mixed in with a healthy smattering of bi and pan flags and many other variants among the sea of rainbows.

Perhaps the only thing more common than trans-related Pride goods this year was corporate logos.

I marched with the Transgender Law Center, except it wasn't just the Transgender Law Center, as TLC was sponsored by Levi's. My partner, sequestered at the end of the parade, walked with her own employer. In between us was everything from entries by the local police to Dropbox, REI sportswear, and any number of companies. They were the big, loud contingents, occasionally broken up by smaller noncorporate groups.

I'm not going to dwell on the companies, though I think their involvement is a symptom, not a cause. To me, if a company wants to bring their LGBTQ employees to Pride, that's fine. If they want to show support regardless? Also cool.

That said, a lot of companies only appear to be interested in Pride for the money they can wring out of the community — money they may turn around and give to LGBTQ-hating politicians in order to further their business goals — but I digress.

Last Saturday, the day after the 50th anniversary of the Stonewall rebellion, according to eyewitness reports, an unidentified transgender woman of color entered the Stonewall Inn in New York City, then full of revelers. She wanted to speak about transgender people who had been murdered out in the streets.

Patrons were unhappy. They initially did not want her to speak, even as some moved to protect her. Many jeered her, while others demanded her removal — even suggesting the police be called. She was eventually given a microphone and allowed to speak for 12 minutes, according to a Reuters report.

Pride is changing. It is not a monolithic event that does, and will always, look the same. Its makeup is moving toward something very different from the white-dominated "gay rights"-themed events of the 1970s into an event that centers people of color and sexual orientations between the poles of "man" and "woman." For some, this event that was born out of a day when gender-nonconforming, queer people of color stood up to the police that were oppressing over their gender and sexuality is simply becoming too radical by focusing on gender-nonconforming, queer people of color.

DeLarverie, Johnson, and Rivera are gone. Many others who were there that night are fading away. Yet, it's unclear that the movement they helped birth is reflective of what they faced, and what they did in reaction.

Our Pride should be for all who need it, and should center those most in need. It is not an event where companies, let alone police, should step in expecting praise for what they may have done to help LGBTQ people. Rather, it should be a moment where they atone for their failure to serve LGBTQ people as they rededicate themselves to how they will rectify these issues going forward.

If the radical spirit of Pride today doesn't sit well with you, then perhaps it is no longer the event for you. Enjoy your privilege while others try to get things done.

Gwendolyn Ann Smith thinks it's time for Pride to face a rebirth. You'll find her at www.gwensmith.com.