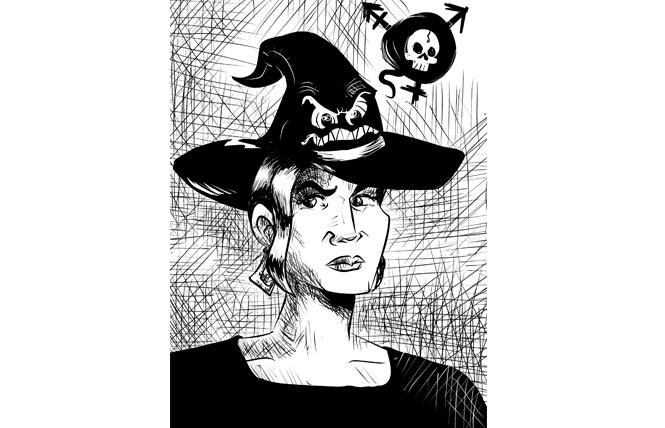 Over the last few months, Harry Potter author JK Rowling as devolved from a beloved children's author to the trans equivalent of reviled anti-gay crusader Anita Bryant. Rowling has evolved over the last two years, from having what her representative called a "clumsy and middle-aged moment" by somehow accidentally retweeting transphobic comments from others to now writing lengthy transphobic screeds on her own website.

Harry Potter is not her only book series, however. She also has written four detective novels under a pen name, Robert Galbraith. The texts, known as the Cormoran Strike series, follow the eponymous investigator and his business partner, Robin Elliott, as they solve brutal crimes.

I have to take a moment here to discuss Rowling's pseudonym. She claims the first name came from her personal hero, Robert Kennedy, while the last name came from a fake name she crafted for herself as a child, "Ella Galbraith."

This said, it seems suspicious in light of her attitude toward transgender people, that there existed a Robert Galbraith Heath, an American psychiatrist who pioneered a lot of what is now known as conversion therapy.

I also have to critique Rowling for using a pseudonym to distance the Cormoran Strike novels from her more child-friendly persona. While I've known many authors to use pseudonyms, this feels more blatantly cynical than most, providing a buffer from more controversial works.

Rowling's fourth Cormoran Strike novel is surely a fine example of said controversy. The story introduces us to the character of Dennis Creed, described as a "transvestite serial killer" who often dresses as a woman to insert themselves into women-only spaces as a way to stalk their prey. It should not be a surprise that this is exactly what Rowling claims transgender people are doing when they transition.

This is also not the first time Rowling has introduced a trans pastiche in the Cormoran Strike books, with a character named Pippa showing up in another of the series, stalking the titular detective. The character is described unflatteringly, focusing on her hands and her Adam's apple. When captured, Strike even makes a prison rape comment at Pippa's expense.

I also feel I should mention a character in Harry Potter which, in retrospect, may be the prototype for Pippa and Creed — and no, I am not referring to that time that Professor Snape ended up in a dress during "Harry Potter and the Prisoner of Azkaban."

The character of Rita Skeeter, a "poison pen" journalist seen throughout the series, is curiously described. While much is said of her scarlet fingernails, her penciled on eyebrows, and her blond curly hair, she is also described as having large, masculine hands — the same as Pippa, perhaps — and an "an oddly square-jawed face." It could certainly fit that Rowling would write a character known for fabrications and falsehoods to be transgender, in light of her now-revealed views.

Now I need to reveal something of my own. First off, I am not a big fan of Harry Potter. I never read the books, and really only watched the films because my partner was a fan. I didn't hate them, but I just really wasn't able to get that much into them.

Even as everyone touted her originality, I saw stories that seemed to follow common fantasy tropes. The "fantastic beasts" all seemed to be fantasy staples — giants, dragons, and so on — and while the notion of Hogwarts itself was largely original, a lot of the underpinnings hadn't been that new since the days of J.R.R. Tolkien.

Her killer in drag is just as dated.

In 1959, Robert Bloch wrote the book "Psycho." This was made into a film a year later by Alfred Hitchcock. In it, Norman Bates, a murderer, has been impersonating and dressing up as his dead mother. The story is likely an allusion to the Ed Gein case from 1957. Psychiatrists had believed Gein was attempting to make a "woman suit" to pretend to be his dead mother.

This notion of a woman suit was later revisited in "The Silence of the Lambs," a 1991 novel by Thomas Harris that became the much better-known film version a decade later. In it, a serial killer named Jame "Buffalo Bill" Gumb is making his own woman suit. Though the story tries to separate him from transgender people, the notion stuck in most minds.

Between "Psycho" and "The Silence of the Lambs" were dozens more such stories, from the pulp novel "Killer in Drag" penned by schlock director Ed Wood Jr. in 1965 to Brian De Palma's slasher film "Dressed to Kill" in 1980. You'll see this played out — and I mean played out — for comedy in "Ace Ventura: Pet Detective" and "Austin Powers: International Man of Mystery." You could even say that the Big Bad Wolf who dons Granny's nightgown and cap in order to eat Little Red Riding Hood is yet another permutation.

So to Rowling: not only is your transphobia harmful, not only does it have real-world consequences on people who really just want to live their lives and have no interest in the bathroom-assault fantasies of you or the bigots who echo your feelings — but, quite frankly, your transphobia is trite and old.

It deserves to be sent to the remainder rack between a dog-eared copy of "Microsoft Windows 3.1: Step By Step" and a 1977 Starsky & Hutch novelization, and has no place in the world of today.

Gwen Smith hopes JK Rowling will someday learn from her mistakes. You'll find her at www.gwensmith.com