Transmissions: 2020: The stakes have never been higher 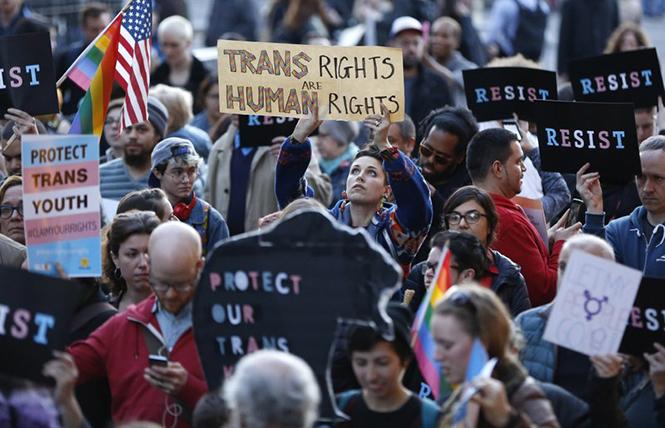 People rallied at the Stonewall National Monument in New York City in February 2017 to protest President Donald Trump's decision to roll back a federal rule saying public schools had to allow transgender students to use the bathrooms and locker rooms of their chosen gender identity. Photo: Courtesy AP

As you read this, we are ushering in 2020, and while we can debate if this is the start of a new decade, or just the beginning of the "20s," it seems all-too-clear that we live in some very challenging times.

The president, vice president, and all their cronies have spent the last three years recasting the government of the United States into a body rife with corruption, ignorance, and bigotry. Trans people were barred from the military while other federal departments attempted to roll back trans rights, seemingly at every turn.

Frankly, the actions that this administration has taken against transgender people feel tame in comparison to what's being done to children in cages along the Southwest border, but they nonetheless paint a bleak picture for all of us within the community.

Meanwhile, the religious right has been making every attempt to legislate against transgender people, up to and including a forthcoming ruling at the U.S. Supreme Court that could effectively strip trans and nonbinary people of some of our most basic rights in this country.

In this environment, we are seeing an increase in anti-trans bigotry and violence. Murders and other hate crimes are on the rise. Many of our allies are overwhelmed by everything else going on in this country, are less likely to assist when they may not understand us, and don't care enough to help in the midst of so much other awfulness.

Additionally, one of our larger trans rights organizations, the National Center for Transgender Equality in Washington, D.C., is in a tailspin amid accusations of racism and union busting. We are left without an effective voice at the federal level exclusively focused on our issues.

I've brought most of this up before, of course, but as we head into this new year, it's important to be honest about this new, terrible landscape ahead of us. Things are most definitely not good.

Yet as bleak a picture as I've painted, I want you to know one important thing: we can foster a better world. In a time when no one is going to rush in and save us against all these machinations, it becomes all the more important that each of us become our best selves.

This is a time for those of us within the community to learn to work together, to provide support and assistance for each other, to open our doors and our hearts to all of us in the community. More than ever before, we are going to have to rely on each other to make it through these times.

We also are going to need to look to our allies, and the many others who are trying to make it through these times. Even as shell groups try to tear apart the LGBTQ community, we need to stand together. We should look to the sex worker community, abortion rights activists, and many others with who we can build strong alliances.

In short, we need to start thinking strategically like never before.

Also, yes, we need to support the organizations that can work for us. I personally have been quite smitten with the work the American Civil Liberties Union has been doing over the last few years on behalf of transgender and nonbinary rights, and feel it may be worth our support. We can use its strong voice, both locally and at the national level.

What's more, for every large organization doing big things, there are score upon score at the local and state level that could use your help. Give of your time, and money, and other resources. As we see losses at the federal level, it is your city, or county, or state that could preserve your rights. Don't forget them.

We also need to speak out more. We need to talk about our rights, and our needs, while pushing back at droves of misinformation about transgender people wanting to attack people in restrooms and dominate women's sports. We truly are our best advocates, and need to rise up.

Of course, there is one big thing I didn't mention that is special about 2020, and that is the presidential election.

If I'm to be honest with myself, I fear that Donald Trump can indeed be re-elected, even after his impeachment. While a majority of people, according to recent polls, feel he should be removed from office, the electorate has a short memory and a fickle temperament. As long as enough people are willing to maintain the status quo, he has a better than fighting chance of remaining in office.

No, I don't like that, but I think the sooner we acknowledge that this is a far better than average possibility, the better prepared we will be to fight back.

It is vital, right now, that we begin to look for a candidate that best represents us, who can be our best hope against a Trump-Pence second term. It's important to follow our hearts, and no matter what, support a candidate who can beat him.

I do not know who that candidate is, but whomever they be, it's going to be key that we show up at the polls this coming November and vote for them, no matter how safe you feel your state is. While I am not one for conspiracy theories, we do need to be prepared for massive attempts of voter suppression and other shenanigans that could further affect the vote.

Again, no matter what happens, we need to be there for each other. It is key that we hold each other up, and keep that spark of hope — no matter how dim it may grow — alive.

Gwen Smith feels that 2020 is going to be even more of a challenge than 2019 was. You'll find her at www.gwensmith.com.