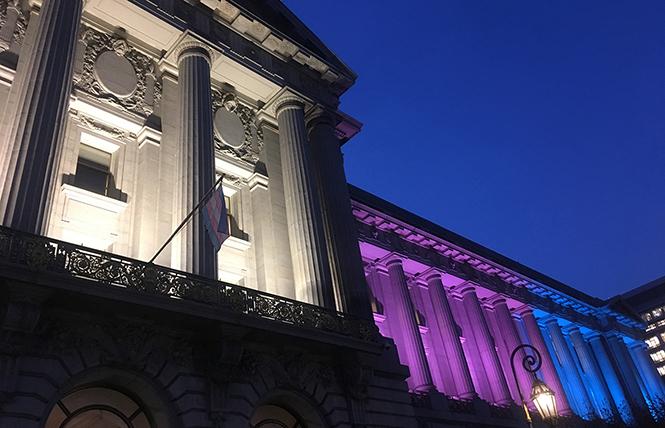 The transgender flag flies over the Mayor's Balcony at City Hall as the building is lit for the 2018 Transgender Day of Remembrance on November 20. Photo: Christina A. DiEdoardo

I don't talk about my status and personal experience as a trans woman in this column very often, mainly because it's not directly relevant to the topic under discussion. Given recent events, however, it would be irresponsible of me not to do so.

On Tuesday, November 20, about 150 people gathered before the steps of San Francisco City Hall to begin this year's commemoration of the Transgender Day of Remembrance. Founded by my Bay Area Reporter colleague Gwendolyn Ann Smith in 1999, TDOR is when we honor the memories of those trans people whom we've lost to violence in the previous year.

The event is especially necessary given the habit of most law enforcement and media to misgender our fallen (most of whom are already marginalized in our society by virtue of being women of color, as well as being trans) as a "man in a dress" or something equally repugnant — and to use our deadnames in all coverage, Associated Press guidelines to the contrary be damned. Thus, for some martyrs, TDOR may be the only time they're remembered under their correct name, as opposed to the one on their government documents.

Sadly, in most of the last 19 years, the numbers of those we've lost have grown ever larger. While some might argue that's due to improvements in reporting, given that much of that jump occurred after groups that formerly opposed marriage equality started to turn their rhetorical guns on trans people in a major way beginning in 2014, it feels more like an increase of violence to many of us in the trenches.

Which is why organizers of this year's TDOR in San Francisco adopted the hashtag #EnoughIsEnough for the event.

"I have to keep their memory alive," Cooper added.

Clair Farley, director of the city's Office of Transgender Initiatives, pointed out that the trans flag was flying from the mayor's balcony at City Hall and the entire building was decked out in the flag's colors of pink, white, and blue.

These are positive gestures to be sure, as is the fact that the city even has an Office of Transgender Initiatives. Still, it begs the question of whether we're addressing the fundamental problem.

The main reason cisgender people (who make up the overwhelming majority of our killers) stab, shoot, beat, and otherwise deprive trans people of life is because they don't see us as possessing the same right to exist as they do. To put it bluntly, in their eyes we're subhuman freaks.

The most pernicious aspect of this kind of bigotry is that other than how far the person infected with it is prepared to personally go to hurt trans people, there's not a lot of practical difference between the man who murders a trans woman because she's trans; the politician who opposes equal access to bathrooms for trans people, particularly trans kids; or the cis queer activist who thinks transphobic jokes are so hilarious (and when called on it, tries to use their queerness as a shield, rather than acknowledging the harm they cause).

It's nice that Mayor London Breed declared November to be Trans Awareness Month. What would be nicer is if she owned up to the harm she caused by endorsing — to the bitter end — San Francisco school board candidate Josephine Zhao, a documented transphobe of many years (and whose history was well known to anyone who was even halfway paying attention to local politics). Ditto for gay state Senator Scott Wiener (D-San Francisco), who endorsed Zhao with full knowledge of her history (and who attended a fundraiser she threw for him a few years ago after she backed a failed measure to repeal protections for trans youth in schools).

At least Wiener rescinded his endorsement of her prior to the election (which, due to the timing of Zhao's withdrawal, went forward with her name still on the ballot). If Breed and Wiener had pulled their support earlier — or better yet, not endorsed a bigot in the first instance — we'd have been spared the spectacle of Zhao formally "withdrawing" from the race but her minions continuing to campaign almost up to Election Day, as well as the danger that she could have won a seat.

The remedy to the Zhao fiasco should be obtaining a public commitment from Breed and other politicos that transphobes will not be supported or endorsed. It won't be, though. Instead, Breed probably figures that she can appease the community by decking out City Hall with lights and flags and appointing a trans person or two to a post and then go on with politics as usual, where people like Zhao are accepted into polite company if they can deliver votes.

While it's easy to call out Breed for her cynicism, she's hardly alone. Legions of cis queers continue to maintain friendships with trans exclusionary radical feminists (TERFs) like those who attacked the SF Dyke March this past summer, despite the tendency of TERFs — especially recently — to join forces with homophobic fundamentalist Christian groups who also demand the extinction of trans women. Other queers genuflect at the heels of RuPaul, despite Ru's history of transphobic behavior that goes back almost a decade. And invariably, whenever a trans person calls out a cis queer for these sorts of behaviors, a virtual mob of the called-out queer's friends forms to demand the trans person be silenced in the interest of "unity."

If you see yourself in the last few paragraphs, congratulations. You provide the agar of social acceptance where the virus of transphobia can grow and multiply — and the blood of my murdered sisters, this year and next year and the year after that — will remain on your hands as well as those of our killers unless you fight the infection rather than collaborate with it.

Got a tip? Email me at christina@diedoardolaw.com