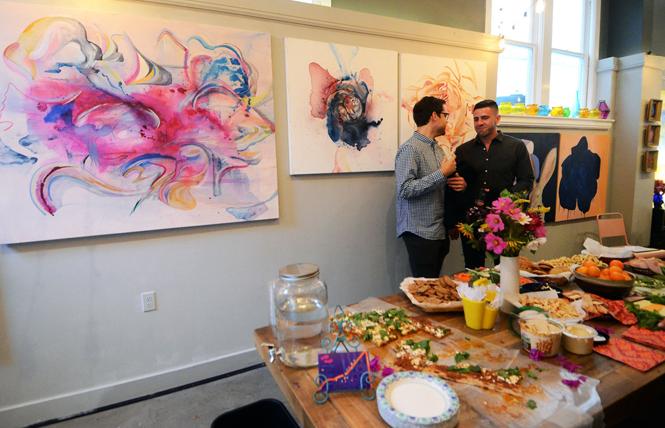 A bustling crowd showed up for the August 1 opening of local artist Ariel Gold's solo exhibition featuring her works inspired by the street life of San Francisco. She had created a number of brush stroke paintings based on people she spied walking along the sidewalk and more textured works that evoked cityscapes peopled with various individuals.

"I love the vibrancy of the city and the way people interact," explained Gold, whose studio is off Market Street near the Hayes Valley neighborhood and has lived in San Francisco for a decade.

Gold, 34, was one of the artists featured during this month's Castro Art Walk. The Art Attack SF gallery (2358 Market Street, Suite 1) had included her works as part of a group show during the June art walk, at which she sold four pieces. Thus, Gold was delighted at being invited back for the August event, where her acrylic on canvas works ranged in price from $180 to $3,200.

"We live in such a big city and tend to spend most of our time with friends in our own tribe. These events allow you to get out of that and interact with people in the community you may not otherwise meet," Gold, a straight ally, told the Bay Area Reporter about participating in the LGBT neighborhood's monthly art walks.

Held in the evening of the first Thursday of the month, the Castro Art Walks are marking their second anniversary in September. Castro business leaders contend the monthly art events have helped drive additional foot traffic to the commercial area those nights.

"The whole idea is to bring people to the neighborhood," said former Castro Merchants board member Angie Stitcher, who helped conceive of the art walks when she worked as the gallery manager of Spark Arts (4229 18th Street). "In 2019, I think we have really hit our stride."

"When I walk around those nights I've observed people are coming for the art walk. It is driving people to the neighborhood," said Aiello, who will program musical acts those evenings in Jane Warner Plaza at 17th and Castro streets.

Pleased by the success of the art walks, which Stitcher helps run pro bono with several volunteers, the Castro Merchants business association this year approved increasing the budget for them. It is contributing $4,500 for the events out of the annual dues its members pay.

"It generates more visibility for the merchants that participate," said Castro Merchants President Masood Samereie, a real estate agent in the neighborhood.

Because of its financial backing of the events, only Castro Merchants members are allowed to be featured on the monthly maps and on the website for the art walks, which can be found at https://www.castroartwalk.com/. Businesses that decide to participate are asked to feature some art component in their establishment that night.

It can run the gamut from showcasing the work of a local artist like Gold to offering materials for people to create their own art project, such as Flore (2298 Market Street) restaurant often does. Retail store Local Take (3979 17th Street) invited the gay-owned Michael's Chocolates to offer tastings last week, as it sells its confections.

Enjoying a complimentary glass of wine at the shop was Skot Land, 57, a gay man who lives in Nob Hill and has attended all but two of the art walks held in the Castro since 2017. In addition to meeting artists and crafts people, Land enjoys the mini street fair vibe of the events.

"Because I am a creative person, I like to see what everybody else is doing," said Land, a multimedia artist in his spare time who works as a recruiter. "I want to get inspiration for my own art and I want the free wine."

Since the spring Stitcher has been inviting restaurants and bars in the Castro to also participate in the art walks. For instance, during the May event restaurant Finn Town (2251 Market Street) featured a cocktail inspired by the late artist Diego Rivera.

For the August event, cocktail bar Blackbird (2124 Market Street) featured the exhibit "Anywhere" by artist Larissa Grant. And Blush! Wine Bar (476 Castro Street) held a meet and greet with artist Edgar-Arturo Camacho-Gonzalez, whose works it is featuring through September 3.

Any business in the Castro is encouraged to take advantage of the monthly events as a way to promote themselves to attendees who could then become regular customers. The next Castro Art Walk will take place 6 to 9 p.m. Thursday, September 5.

The line up of participating merchants will be posted later this month to the website.

New mural coming to the Castro
One project Stitcher is working on as the art walk events enter their third year is a self-guided walking tour of the various murals to be viewed in the Castro. One of the oldest and most well known can be found on 16th Street just off Market Street.

Elba Rivera and Clif Cox created "The Hope For A World Cure" mural in 1998 in response to the AIDS epidemic. They worked in collaboration with a number of other artists under the purview of Precita Eyes Muralists.

Another mural created in response to AIDS, as well as the 1989 Loma Prieta earthquake, is David Seibold's "Laughing Gorilla" painted on the side of the building housing an organic grocery on 19th Street at Castro. As the B.A.R. reported in June, two gay artists repaired the work this year as it had faded with time.

A self-guided tour, said Stitcher, would allow people "to walk around the neighborhood to see the murals. And they could do it not just during the art walk events."

There is no timeline for when the tour will debut, she said. Once it is completed, it will be uploaded to the website for the art walks.

The neighborhood should see a new mural be unveiled next summer, as the city set aside $25,000 for its creation at the request of gay former District 8 supervisor Jeff Sheehy. The Castro CBD is working with the city's arts commission on its installation and recently put out a call for submissions from artists interested in painting the mural.

A potential location along 18th Street is being eyed for the artwork, though Aiello told the B.A.R. that its placement has yet to be finalized. The CBD needs to secure permission from both the building's owner and merchant tenant if it is to be painted on the facade of a business.

It is working under a deadline of June 30, when the city's current fiscal year ends, to have the mural in place. 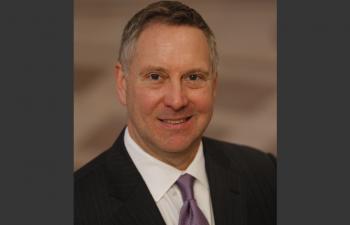 David Perry, who helps oversee the Rainbow Honor Walk, was recently named to the San Francisco Chamber of Commerce's board. Photo: Paul Chinn

Part of the Rainbow Honor Walk, the sidewalk markers honor eight deceased LGBT luminaries. They are part of the second group of 24 people to be added to the walk that was announced in 2016.

The 3 foot by 3 foot bronze plaques cost roughly $7,000 each and feature the visage of the person, a short bio, and their signature. Four are being installed along the sidewalk on both sides of Market Street.

A plaque that had been installed honoring the late gay Iranian poet Fereydoun Farrokhzad is being replaced. Local Iranian leaders asked for a revision to the text about his life, said David Perry, a gay man and public relations professional who helped conceive of the project.

Perry, who was recently named to the board of the San Francisco Chamber of Commerce, is aiming to have the next set of eight plaques installed along Market Street by October 11, National Coming Out Day.

Additional honorees for the Rainbow Honor Walk are to be announced in early 2020, said Perry.