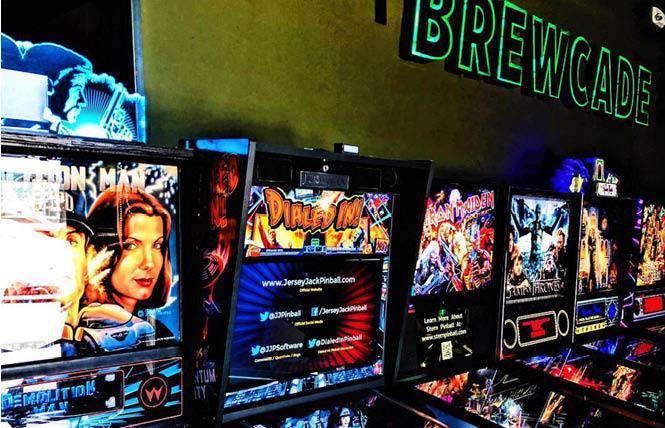 Brewcade, the popular arcade and craft beer bar on upper Market Street in San Francisco's gay Castro district, is moving forward with its expansion plans into an adjacent restaurant space and opening up its entertainment offerings to all ages.

As the Bay Area Reporter first reported in September, the siblings who own the entertainment venue at 2200 Market Street are combining the two spaces into one totaling roughly 5,000 square feet and plan to add food to the lineup at the 4-year-old Brewcade. They recently bought the adjacent restaurant, which had been operating under the name Botellón until closing last fall, in order to facilitate the expansion of their business.

Wednesday, March 6, co-owners Tiffny Vergara Chung and her brother, Shawn Vergara, officially filed for a conditional use permit for the expansion project with the city's planning department. The planning commission will now take up the matter at one of its hearing's sometime this year.

As Vergara Chung explained at a meeting of the Castro Merchants business association in November, "We can really flesh out the concept we want to do."

Shawn Vergara, noting that the bar is LGBTQ owned, added, "It's been our baby. We want to see it grow."

The bar owners are relinquishing their Type 42 liquor license since they have now purchased the eatery's Type 47 license. The new alcohol permit will no longer restrict them from allowing people under the age of 21 into Brewcade.

"The acquisition of the restaurant will enable us to offer food and more variety of games to further enhance the concept," wrote Vergara Chung in the permit application. "In addition to this, we would be able to service all ages where fun, family-friendly destinations in the neighborhood are lacking."

Some of the expanded gaming options could include pool tables, skee-ball, and air hockey, Vergara Chung told the neighborhood's business group last year. Brewcade would be open until 1 a.m. Sundays through Wednesdays and 2 a.m. Thursdays through Saturdays, according to its permit request. It currently opens at 4 p.m. on weekdays and at 2 p.m. weekends.

"We are a neighborhood-serving establishment and plan to hire locally. The restaurant would create employment opportunities for the community," she noted in the permit application. "The existing character of the community will not be adversely affected."

Construction on the reconfigured space is estimated to cost $250,000 and take upward of three months. Should their permit be granted, the siblings hope to open the remodeled Brewcade later this year.

The business expansion would help activate a major intersection along the upper Market Street corridor that has struggled for years with retail vacancies in prominent corner storefronts since the opening of three mixed-use developments where Market crosses Sanchez and 15th streets. It would follow the expected opening in the coming weeks of Willkommen, a new beer hall from San Francisco-based Black Hammer Brewing, in the intersection-fronting retail space on the ground floor of 2198 Market Street.

Kitty-corner to Brewcade's space at 2175 Market Street sits a vacant retail space that has long been advertised as a potential restaurant location. Zoning changes for the commercial corridor being pushed by gay District 8 Supervisor Rafael Mandelman would make it easier for eateries serving only wine and beer to open along upper Market Street.