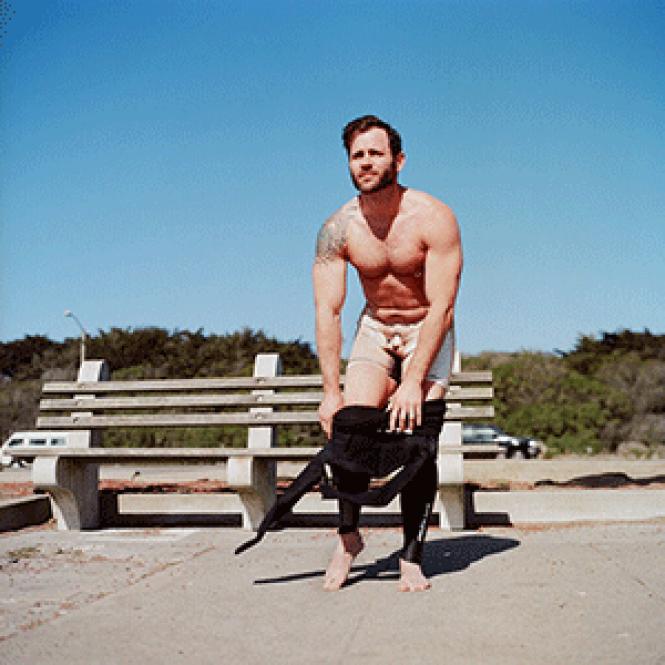 Dean Anderson had just seen Michelangelo's David statue at the Galleria dell'Accademia in Florence, Italy and was browsing through the vendor booths outside the museum when a certain souvenir item caught his eye. It was a cheap pair of briefs bearing the marble manhood from the famous artwork.

"I had to have this pair of underwear," Anderson recalled thinking during his 2004 vacation. "I brought it home and never really touched it for a long time."

Years later, during a photo shoot with Jeffrey Braverman, who splits his time between homes in San Francisco and the Russian River resort area, Anderson dug out the kitschy skivvies from his closet and suggested he pose in them.

"We got the underwear and it all went downhill from there, or it became a photo story and a movie from there, I guess," said Anderson, 53, who lives in Sonoma County.

Their photo shoot inspired Braverman to photograph numerous older gay and transgender men wearing the underwear. And it sparked him to make a short film that delves into the biblical legend of David and Goliath. Called "David, In Brief," the 16-minute movie will have its premiere June 18 at Frameline, the San Francisco International LGBTQ Film Festival.

Braverman, 51, initially had dismissed the idea of having Anderson wear the briefs as too comical but soon relented. After developing the black and white photos from the session, he found they had a trompe l'oeil effect.

"They looked 3-D in a way. Michelangelo's 2-D iconic penis became an illusion," said Braverman, who to this day keeps the underwear in his camera bag in case he encounters a subject he wants to photograph.

Anderson said he liked "the cheekiness" of the photos and "the fun in being able to have a pair of underwear on and still be able to display an artful pair of genitals at the same time."

Using Michelangelo's iconic statue of the giant slayer as a jumping off point, Braverman explores in his film how the famous underdog story resonates in particular with gay and transgender men. As the Old Testament tale goes, the young David used stones and a sling to defeat Goliath, a towering Philistine warrior, to become the second king of the Israelites.

"Every David will have their Goliath," said Braverman, who has also collected the men's images and their tales of confronting their personal demons into a self-published 55-page book that he is releasing in conjunction with the film. "They used whatever power they had within themselves to overcome oppressive situations."

He has also launched a website – http://www.YourGoliath.com – and a social media campaign using the hashtag #YourGoliath to inspire people to publicly confront their inner demons. On the site people are encouraged to write about their personal struggles.

Fellow photographer Arthur Tress, 76, who is gay and lives in San Francisco, posed for Braverman as a pool boy adorned in the David briefs. For his Goliath tale, Tress described the guilt he felt at avoiding the Vietnam War draft due to student deferments.

He pointed to Braverman's "rapport with people and sensitivity" in explaining how he is able to convince his subjects to don a gag garment and expose closely held secrets.

"It is how he was able to get these complete strangers essentially to put on the shorts and reveal themselves in an intimate way," said Tress. "He is a very sympathetic person."

The multi-faceted David project has allowed Braverman to address his own struggle with growing older in a society and a community, in this case of gay men, that idolizes youthful and muscled bodies similar to the one Michelangelo etched into stone centuries ago.

"You gravitate toward yourself a lot and echo that in your art," said Braverman, who for years was involved with a woman until he came out as gay in his 40s. "I just found there is this prejudice and belief young is beautiful, that supermodel bodies are considered the mark of perfection, like Michelangelo's David."

Anderson also came out as gay late in life, which he talks about in the book as being his Goliath. He was married to a woman and raised a daughter, who is now in her late 20s, and only two years ago officially and publicly came out. Because he was closeted when he posed for Braverman, his identity is hidden in the photo from their session that appears in the book and on the website.

"I love what Jeff has done, not just about the shorts or posing in them, but of turning it into the 'What's your Goliath?' piece," said Anderson. "We all have a version of that story someplace. It manifests itself in dozens and dozens of situations we are all facing on a daily basis. Some of them are bigger than others based on your own, what your perspective is."

Braverman's family moved to San Francisco shortly after he was born in Modesto, and within two years had relocated to Marin. His parents later divorced when he was 10, and he lived with his mother in Marin, where he graduated from high school. On weekends he would visit his father in the city.

He started his professional career as a photographer freelancing for major magazines like Newsweek and Esquire. Nine years ago he turned his focus to directing and producing videos for clients, whether it be filming TV commercials, shooting music videos, or working for a winery.

A number of years ago he started working on a documentary called "(UN)CUT" that looked at the political fight to ban circumcision in San Francisco. But unable to find a working storyline and lacking the funds to finish the film, Braverman shelved it with hopes of returning to it later.

Thus "David, In Brief" is his debut as a film director. He had submitted a rough cut of the short to Frameline last year, but it was rejected, so he resubmitted the finished film this year.

"I was very honored by being selected into Frameline," said Braverman, who five years ago met his partner, Ross Camp, a software company employee. "I am from here, so to be able to screen my short with friends and family is a big honor for me."

Having seen Michelangelo's David when he visited Florence at the age of 18, Braverman would like to return there someday.

"I would love to screen the film in Florence, that would be an amazing experience," said Braverman. "We can all relate to David in our own way."

The film will screen at Frameline as part of the shorts program called Homegrown: Local Shorts at 9 p.m. Sunday, June 18 and again at 9:15 p.m. Thursday, June 22. Both screenings will be at the Victoria Theater, located at 2961 16th Street in the Mission.

Braverman is also hosting a pop-up photography exhibition and book release party from 6 to 9 p.m. Friday, June 23 at the Art Saves Lives Studio and Gallery, 518A Castro Street.

For more information about his short film, visit http://www.DavidInBrief.com.