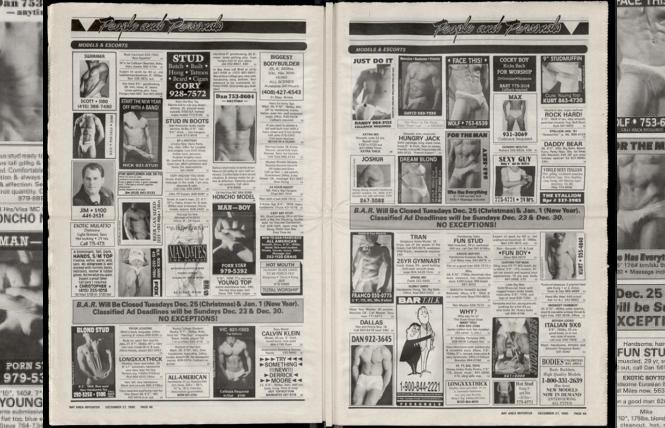 In the LGBTQ community, the media that serves the culture addresses the needs, wants and desires of that culture. One point of ambivalence is the open expression of sexuality and its manifestation in marketing. As long as there is a demand, there will be a supply.

What's interesting is that that applies also to sex. In my many years as a photojournalist, writer and columnist, I've noticed the disconnect as it pertains to escorting. Sex, too, is a commodity. So, let's break it down.

The Bay Area Reporter, one of the LGBTQ community's premiere publications, has never shied away from expressing and exploring every aspect of the community. As I've pored through the B.A.R.'s vast archives of escort advertisements, feelings of nostalgia and romance swept over me.

They all had great smiles, seemingly containing all 32 teeth, great personalities and only slightly art-directed bodies. Did any of them rock a waistline over 32 inches? They were, at the very least, boyish, at one end of the spectrum, very dominant and masculine at the other. We embraced body and facial hair. We had no problem with hippies to S&M.

On a certain level, it all made sense, as it was a more direct way for the customers to get exactly what they wanted without wasting anyone's time, or enduring judgment and/or stigma. Money was no object.

Then, I was brought back to reality by one of my closest friends, local black gay cultural anthropologist, Bob Mathis-Friedman, M.A., who stated, ''When I remember looking at the B.A.R.'s ads, they were very boring and homogeneous to me. They definitely were not representative of the city's diversity.''

I agreed, but came to the conclusion that the ads were about making money, not the United Colors of Escorting.

He agreed, but then, added, ''If someone of color were to take out an ad, what would be its optics, or would it be the same-old same-old?'' 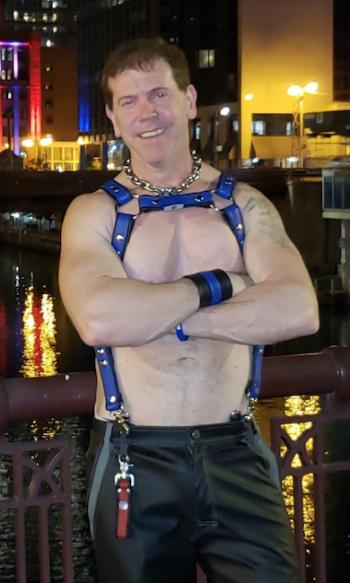 But as I got older, I fell for the stereotypes that escorts are uneducated, trashy drug addicts who are lazy and can't hold steady employment, and that the men who hire them are old, fat, ugly desperate men, which I now know is totally false. In my career as a sex worker, I've found the reality to be just the opposite. What determines that is money.'"

As technology and the virus have readjusted our sexuality, I've thought about present-day options, the proliferation of sex sites such as rentmen.com, M4M.com, and Onlyfans.com present visuals that are available on your laptop and smartphone, with transactions performed on your credit card.

A wave of romanticism is also killed for the newspaper. Long-gone are the days when, at the last minutes before Monday's deadline, a lot of flirting and teasing would take place when the men would come into the B.A.R. offices to pay for their ads in person. Ya had to love it!

Jared said, ''The client/escort payment relationship has changed because we're now using cash transfer apps, where both parties must use their real names. In my opinion, the negative in present-day escorting is that it is in grave danger because of Kamala Harris' SESTA/FOSTA law, which has done major damage to escorting and sex work, in general.''

Those are serious realities, but, still, looking at the ads, over time, I missed the days when a man would strip off and get a passionate, clever photographer to create a sensual image that rode the razor's edge between that and hardcore pornography, have it printed, art-directed and laid out within a beautiful newspaper. They utilized trends, or bucked them, from hardcore leather fetish to Abercrombie & Fitch realness to Dolce & Gabbana hotness.

When I queried my two friends about the future of escorting and its ads, in general, Bob's conclusion is, ''It's difficult to say, specifically, but sex work should absolutely be utilized. Get over it and tax it like any other adult activity. As far as the ads go, I see that no one knows what they're doing with their cell phones. It seems that Grindr doesn't require much in the world of imagery.''

Jared's response was, ''People want a serious moment of connection. It's really impactful for closeted gay, bisexual and bi-curious men within and independent of sex. As a practice, escorting is not going away anytime soon. It's not called 'the world's oldest profession' for nothing."

Added Jared a salutation to the B.A.R., "Congratulations on your 50 years and your bravery around being transparent about sex work as a culture and as a business.''