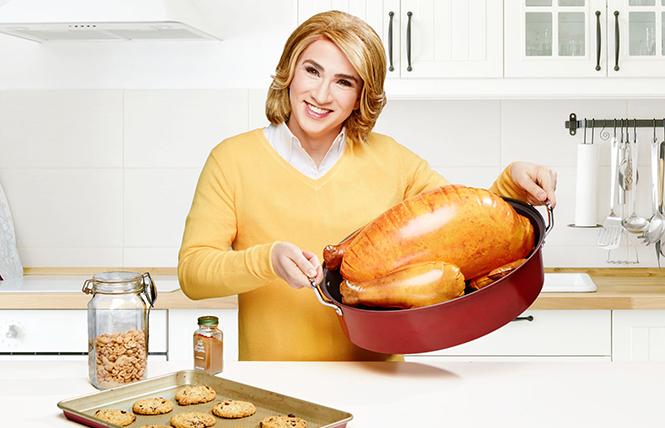 Things you might expect to find at Feinstein's at the Nikko: a moonlighting Broadway star translating her life story into song; a jazzy medley of tunes about Manhattan; a performer extolling the virtue of embracing one's 'authentic self.'

Things you might not expect to find at Feinstein's at the Nikko: a Sloppy Joe sandwich (It's actually on the menu —and quite tasty— with a side of mac and cheese); an onstage demonstration of how to fold a fitted sheet.

But lo! The elasticized equivalents of hospital corners are on the bill on July 26 and 27 in one of the swanky nightclub's more eclectic bookings of late: Comic actor Ryan Raftery's one-man musical, The Rise and Fall (and Rise) of Martha Stewart.

Over the past five years, the Brooklyn native has generated rave reviews, and a few raised hackles, with similar salutes to Anna Wintour, Calvin Klein and Andy Cohen at venues in New York, Los Angeles and Provincetown. 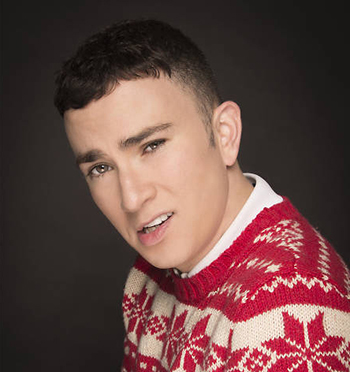 "I heard that Donna Karan wasn't thrilled when, in my Calvin Klein show, I said she'd gotten her start as Ralph Lauren's cleaning lady," Raftery noted in a recent interview with the Bay Area Reporter.
"But I'm not looking to hurt anybody's feelings or to represent real life. It's so clearly a joke. I'm a comedian first and foremost."

Wintour, on the other hand, was quietly supportive of Raftery's The Most Powerful Woman In Fashion after her daughter, Bee, attended the show and assured her mom it was silly fun. She even donated a pair of her trademark Chanel sunglasses to a silent auction held at a benefit performance of the show.

Andy Cohen sent flowers on opening night of his gentle roasting (a tidbit from Raftery: When Cohen was growing up, his mother was obsessed with Gloria Vanderbilt. Hence...).

"I mean it was her entire company," says Raftery, who reports they enjoyed it.

"Recently, I was in the lobby of an office in Manhattan and Martha was there coincidentally. The assistant who was with her recognized me from the show and brought me over to say hello. I just said 'Thank you for being so cool about the whole thing.'"

Rise and Fall begins on the day that Stewart is about to go off to prison and proceeds to flash back and forward to episodes throughout the Domestic Diva's storied life, each accompanied by one of Raftery's parodies of pop songs and show tunes.

"Once I choose a character to build around," says Raftery, "the songs are what come next."
It's as if Weird Al Yankovic, rather than jumping haphazardly from topic to topic, made biographical concept albums. Rise and Fall features the Marthafication of melodies made famous by Beyonce, Moana and even Metallica.

Raftery says he's reluctant to discuss many specifics about the musical selections because, "part of the fun for audiences are those moments when the tune and my lyrics click together in their minds." He said. "I want them to figure out what song it is within the first five seconds so they can get invested in the parody and listen to words." 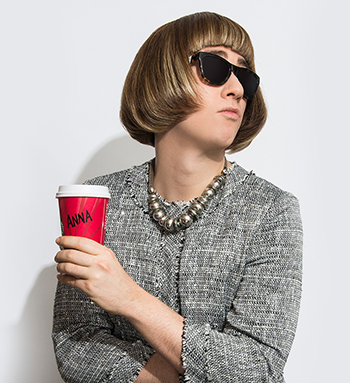 While Raftery wears wigs and costumes when he performs his Stewart and Wintour shows, there's no effort at drag verisimilitude: He aims for just enough iconic elements to let the audience in on the joke.

"There's a little camp factor," he says, "but it's not about impersonation. The wig is a signal that I'm Martha Stewart and after a couple minutes the audience just accepts that. Even with the success I've had, my mother still doesn't like when I dress as a woman. She brings all her yenta friends to the shows though, and then they tell me how handsome I am without a wig."

Stage creature
Growing up in Brooklyn, Raftery, who says "I'm a stage creature," always had his eye on Broadway. After attending NYU's Tisch School of the Performing Arts, he briefly moved to Los Angeles and began auditioning, winning the occasional guest appearance on shows including Law & Order: SVU and Ugly Betty.

"My problem in LA," which followed him back to New York and Broadway musical casting calls, "is that I have the face of a tenor and the voice of a baritone."

Raftery showed some grit when, while taking a series of copywriting jobs to pay the bills, he began to develop his own stage material so he would be less dependent on auditioning for others.

"I really admire the way that Martha Stewart wants to keep on working," says Raftery of his latest muse. His first cabaret concoctions, including Ryan Raftery and Friends: A Solo Show, won him good notices and a small band of admirers, but didn't do much to propel his career forward. Then he decided to try the Wintour parody.

"That show really changed my life," says Raftery. "It carved out a niche for me as someone who does celebrity bio musical parodies. I hadn't quite realized it before, but you really need to do something that stands out from the crowd. Before, I was a cabaret artist people had never heard of, performing as myself. It was very hard to get people interested."

Raftery says his parody shows have proven to be much more than an initial attention-getting gimmick to boost his profile.

"I really started in cabaret because I couldn't get cast on Broadway. But now, as a creator, it's hard to imagine what could be more fulfilling than writing, producing and starring in my own work and having people want to see it. Now I'm working on some projects with other people, but I will always keep doing this kind of live show. I'd love to do them with really high production value, maybe to film for Netflix or HBO."

Later this year in New York, Raftery will debut his latest, a saga of Ivana Trump before it likely makes its way to San Francisco.

"I was never interested in political humor before," he says. "But this has turned out to be my favorite. It's also the first time I've really had to play a girl. Anna and Martha have a very masculine energy."

The Rise and Fall (and Rise) of Martha Stewart with Ryan Raftery, July 26 & 27, 8pm at Feinstein's at the Nikko, 222 Mason St. Tickets: $35-$70. www.feinsteinsatthenikko.com
www.twitter.com/ryanraftery