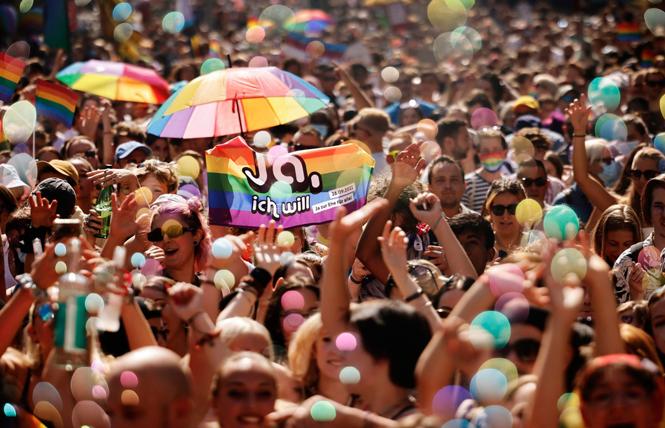 People demonstrated at the September 4 Pride parade in Zurich for the rights of the LGBTQI community. Photo: Michael Buholzer/AP

Tens of thousands of Swiss people took to the streets of Zurich September 4 in support of the country's same-sex marriage referendum and for the Alpine country's annual Pride celebration.

This year's Pride theme was "You can do it. Marriage for everyone now."

The pridegoers marched in favor of passing the national referendum that goes before Swiss voters September 26. The bill was sponsored by Marriage for All, the country's marriage equality campaign.

The Federal Assembly's upper house, the Council of States, approved the bill by a 24-11 vote margin. The opposition promptly gathered more than 61,000 signatures to place the issue on the national ballot for Swiss voters to decide.

Marriage equality is supported by four out of five (81%) Swiss voters, according to a survey conducted by Pink Cross, a Swiss LGBTQ advocacy group, published in November 2020. The survey also found that an overwhelming 67% of conservative voters who identify as members of the Swiss People's Party also support same-sex marriage.

Switzerland passed same-sex civil unions in 2007. However, according to Equaldex, the law did not grant full marriage rights. Same-sex Swiss couples could not access fertility treatment, adoption, or facilitated Swiss naturalization.

Same-sex marriage referendum opponents publicly oppose the bill, claiming marriage should be only between a man and a woman. They also support traditional families with a mother and a father.

Switzerland is not a member country of the European Union.

Yucatan joins Baja California and Sinaloa as the most recent states to approve marriage equality within the last three months, according to a Yucatan government August 27 news release. The new law states same-sex couples now have "the free and voluntary legal union of two people with equal rights, duties, and obligations," according to the release.

According to the Yucatan government, Mexico's supreme court legalized same-sex marriage in 2015 but not completely. The wording in the law declared it unconstitutional to prohibit marriage between couples of the same sex. This forced same-sex couples marrying in the Yucatan to apply for a pardon to be married.

Conversion therapy is the practice to attempt to change an individual's sexual orientation or gender identity. The practice has been denounced widely by the United Nations, World Health Organization, and other health experts, governments, and states as well as global human rights advocates.

The Yucatan joins Mexico City, Mexico's capital, in banning the practice. Mexico City did so in 2020. Twenty states In the United States, including California, have banned the practice being used on minors, while two Australian states, the Australian Capital Territory and Queensland, have banned conversion therapy for all age groups.

Canada and other countries have proposed laws banning conversion therapy at various stages of the legislative process.

Ansar al-Islam is a banned militant group local news outlets have connected to al Qaeda in Bangladesh, reported the the New York Times.

Security was tight in the packed courtroom when Rahman announced the verdict before four of the six convicted militants in Dhaka on August 31. Two men are still at large, Syed Ziaul Haque Zia, a former major fired by the Bangladeshi Army, which accused him of involvement in an attempted coup in 2012, reported the Times, and his associate Akram Hossain.

Al Jazeera reported the other five convicted men are Md Mozammel Hossain, who used the alias Saimon; Md Sheikh Abdullah; Arafat Rahman; and Asadullah (the only name reported). Two of the suspects, Sabbirul Hoque Chowdhury and Zunaid Ahmed, were acquitted due to lack of evidence.

Al Jazeera reported five of the convicted men were already sentenced to death in February for the 2015 murders of a blogger and publisher in separate incidents.

More than 50 people — academics, activists, journalists, independent bloggers, religious minorities, and others — were murdered in a similar fashion as Mannan and Tonoy by al Qaeda groups or the Islamic State of Iraq and the Levant between 2013 and 2016 in Bangladesh. The government denied the existence of the terrorist groups in the country at that time.

The sentencing came after the defense and prosecution completed oral arguments before the tribunal August 23.

Rahman stated the attack on gay activists Mannan and Tonoy was part of a premeditated series of attacks by militants on secular activists and religious minorities. While pronouncing the verdict the judge stated that the punishment will "set an example" that Bangladesh does not tolerate "militancy or terrorism in any form," reported Al Jazeera.

The prosecutor said he was pleased with the outcome.

"This verdict is a strong message for the militant group who are operational in Bangladesh," said Golam Sharuar Khan Zakir, the public prosecutor in the case, reported the Times. "We are happy with the verdict. We believe that justice for Xulhaz and Tonoy is served."

Five years after the gay activists' killings, Mannan's brother, Minhaz Mannan Emon, who filed the case against the unidentified assailants, saw justice. He told Al Jazeera he was happy that the "law enforcers have been able to find my brother's killers."

"Though we are not going to get Xulhaz [Mannan] back, it's a consolation for us that the killers have been handed the maximum punishment," Emon said.

Bangladeshi LGBTQ rights activists were pleased with the judgment, but they did not agree with the death penalty. They preferred life imprisonment. They also expected the Bangladesh government to bring the two alleged killers still at large to justice.

"We are happy with the judgment. At least after a long time, we get justice," Shahanur Islam, a gay rights campaigner, told Reuters.

Khairul Islam, the eight men's defense attorney, denied that the men belonged to a militant group, telling reporters he would appeal their sentences, reported the Times.

Remembering
Five years ago, six men disguised as couriers hid their weapons used to kill Mannan and Tonoy inside the boxes that they carried into Mannan's secured apartment building in the Kalabagan area in Dhaka, police told the Times.

The activists were praised by the U.S. State Department and the U.S. Agency for International Development earlier this year on the five-year anniversary of their deaths. A graduate of international relations from Dhaka University, Mannan started working for the U.S. Embassy in Dhaka in 2007. He was a protocol specialist for nine years and a founding member of the Embassy's Diversity Committee. He then moved on, working for the USAID's Bangladesh Office of Democracy and Governance, where he led programs promoting human rights at the time of his murder.

In 2018, USAID created the Xulhaz Mannan Inclusive Development Award to honor and propel Mannan's legacy, the USAID statement added. The annual award is given out to a USAID employee who demonstrates a commitment to the inclusion of marginalized populations — including persons with disabilities, LGBTQI+ people, Indigenous peoples, youth, and ethnic and religious minorities.

"Xulhaz's selfless dedication to advancing the principles of diversity, acceptance, and inclusion exemplified the best of Bangladesh, as did his generosity of spirit, devotion to family, and dedication to community," said Secretary of State Antony Blinken in the release.

Mannan and Tonoy co-founded Bangladesh's first-ever LGBTQ magazine, Roopbaan. The two men launched the magazine to spread tolerance and raise awareness about LGBTQ rights in Bangladesh in 2014, reported Al Jazeera. Mannan was the magazine's editor and the leader of the country's Rainbow Rally, a pride celebration held on the Bengali New Year.

Tonoy was a member of the Lok Natyadal theater group and taught drama to children at the People's Theatre, reported the National Herald India.

Homosexuality is illegal in Bangladesh under a colonial-era anti-sodomy law, Section 377. Individuals arrested for same-sex relationships face punishment ranging from 10 years to life in prison.

Since the double murders, transgender rights activists have moved the needle forward for LGBTQ rights in Bangladesh.