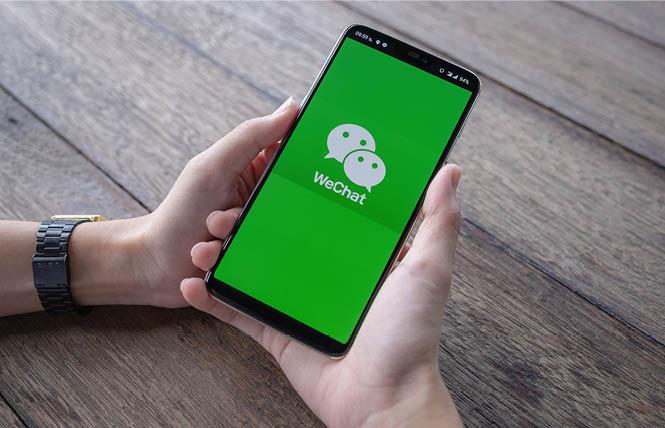 WeChat suddenly shut down LGBTQ accounts in China in an action that many see as a crackdown by the government. Photo: Courtesy AdobeStock/Jirapong

Digital supporters of LGBTQ and feminist communities in China were outraged and quickly silenced last week when WeChat permanently wiped out hundreds of profiles overnight without a trace, leading to concerns of a crackdown by the communist government.

The powerful social network, which has over a billion annual users, also swiftly shut down the ensuing online demonstration, deleting accounts where users changed their profiles to "unnamed account" and spoke out using #unnamedofficialaccount, reported the South China Morning Post.

Some of the LGBTQ and feminist accounts had a notice from WeChat stating it received "complaints about the pages," and informed people logging onto the profile that, "all content has been blocked and the use of the account has been stopped" for violations of unspecified social media regulations, reported Agence France-Presse.

Other accounts simply had a message "unnamed official account" or did not appear in search results, reported Reuters.

Universities and colleges do not have LGBTQ student groups on campus. Over the years, many queer students took it upon themselves to create their own off-campus digital support groups using WeChat. Some of the banned student groups were Huazhong University of Science and Technology Gay Pride; Peking University's ColorsWorld; Shanghai's Fudan University's Zhihe Society, a feminist student group focusing on LGBTQ issues; and Guangzhou-based Gay and Lesbian Campus Association in China, which cooperates with universities in the area.

Student groups were not the only organizations affected by the shutdown. WeChat accounts were also shuttered at academic associations such as Wuhan University's Gender Equality Research Association, Renmin University of China's Sex and Gender Research Society, and similar research groups at Huazhong University of Science and Technology and East China Normal University associations across China, according to reports.

Queer student leaders from two of China's top schools, Tsinghua University and Zhihe Society, were defiant against WeChat's actions in their July 7 responses.

"Our activities will not stop due to the closure. On the contrary, we hope to use this opportunity to start again with a continued focus on gender and society, and to embrace courage and love," stated Fudan University's Zhihe Society.

The BBC reported that in a statement on Weibo, another popular social media network, Tsinghua University's Wudaokou Purple's leaders wrote that despite their frustration, it made their community closer.

Fan Popo, a Chinese filmmaker now based in Berlin, was upset by the news. Fan Popo has worked closely with many LGBTQ Chinese student groups screening his documentaries focused on LGBTQ issues, such as "The VaChina Monologues" and "Mama Rainbow."

"It's very painful seeing this," he told Variety. "Such groups are very important even though they were half or fully underground already."

Other LGBTQ and feminist student leaders remained silent on the issue.

Tencent Holding Ltd., operator of WeChat, known as Weixin in China, has not provided an explanation for the shutdown.

Not everyone upset
Not everyone was upset by WeChat's actions. Some believe the LGBTQ community is disruptive of Chinese culture.

"As a Chinese parent, most people would feel this is repellent and want authorities to ban them," Tao Lina, a Shanghai-based vaccine expert, wrote on WeChat in a rant against the West and the LGBTQ community.

Homosexuality is not a foreign concept to China as much as modern opponents of LGBTQ rights espouse. The Morning Post reported evidence of homosexuality existed before cultural interactions between the East and West began. The newspaper reported poetry references to same-sex relationships, and in the southeastern province of Fujian a form of "gay marriage" was prevalent; and there was a patron deity of homosexuality, the rabbit.

However, through the centuries, acceptance of LGBTQ people fluctuated. In 1979, a Chinese law against "hooliganism" was used to criminalize consensual sexual same-sex relationships. Punishments ranged from imprisonment to execution, reported the Morning Post.

However, even with this progress, homosexuality remains taboo and same-sex relationships are not legally recognized in China.

Eroding freedom
Many believe it appears WeChat's attack on China's LGBTQ and feminist communities is strategic and part of a larger movement by China's ruling Communist Party to suppress public criticism of the government and pro-democracy expression.

CNN noted the sudden closure last year of China's largest Pride event, Shanghai Pride and this year's silencing of Li Ting, China's soccer star and first openly lesbian sports figure. Her June 22 coming out post on Weibo was deleted following a backlash. She has since gone silent on social media.

WeChat's wiping out LGBTQ and feminist profiles echoes Weibo's 2018 attempt to "clean up" the internet, meaning it closed sites advertising "pornography, violence, and homosexuality," Variety reported. Nearly 190,000 digital activists quickly responded with #iamgay and successfully got the Twitter-like network that has around 500 million users to back down in 2019.

The difference this time is that it doesn't appear WeChat will restore the LGBTQ organizations' accounts.

Tightening internet laws continue to restrict digital freedom of expression. Since 2016, all foreign non-governmental organizations are required to register with the Chinese police, but new internet rules introduced this year added self-publishers to apply for an official license to publish current affairs content, which alarmed LGBTQ groups. They feared the threat of losing one of their last vestiges of free expression, reported the Morning Post.

LGBTQ activist Ou Jiayong, who also uses the name Xixi, told the newspaper that she believed the student groups were deemed "dangerous" due to teaching about social activism and civil society. Ou Jiayong was the student who took the textbook publisher, Jinan University Press, to court twice and lost both times.

The only hints that the Chinese government might have played a role in WeChat's actions come from an unidentified founder of a group, who told the Associated Press that authorities ordered universities in Jiangsu province to investigate women's rights and sexual minority organizations to "maintain stability."

Then there was a precursor to WeChat's action in May. Reuters reported that student groups and university representatives of the Communist Youth League discussed the loyalty of LGBTQ university groups to China's government and the Communist Party at a springtime meeting, three unidentified sources with knowledge about the meeting told AP. The Chinese Communist Party-run league is a university department in charge of student affairs.

The sources said LGBTQ student groups were asked if they were anti-Party or anti-China, and whether any of their funds had originated from abroad during the meeting.

"We explained that our LGBT education work was within campus only," one university student told Reuters. "After our meeting in May we were dismantled."

Queer and feminist groups are not the only ones facing countrywide cancellation, according to Amber, a bisexual Chinese university student currently living in Beijing. She used a pseudonym to protect her privacy.

"It's unclear whether this is a WeChat platform-driven event or a state-driven one," Amber wrote in an email interview with the Bay Area Reporter. She added that environmental and animal rights groups supported by non-governmental organizations as well as right-wing and left-wing groups have also "been blocked" by WeChat.

Experts in China and the LGBTQ community and other social justice movements told the Morning Post that WeChat's shutdown of queer and feminist accounts appeared to be caught in a technicality situation just as much as a socially taboo situation.

The student organizations operated in an unregistered state and, therefore, technically were illegal, however, universities made it impossible to obtain official recognition, Hongwei Bao, an associate professor of media studies at the University of Nottingham and specialist in queer politics in China, noted. This made them sitting ducks for a targeted action, which appears WeChat played out in a "planned and coordinated" action.

"In the past we've only seen the cracking down on individual societies. But this scale of cracking down on all student societies is unprecedented," Hongwei Bao told the Morning Post, calling it "very cleverly done."

Aynne Kokas, an associate professor at the University of Virginia and expert on US-China media and technology relations, agreed. She added that historically the LGBTQ community has been effective as digital activists and targeting WeChat could have the "most significant material impact" on the community's ability to mobilize the movement.

The action struck at the heart of how China's LGBTQ community communicated and advocated for their rights.

Kokas noted an added layer: it's harder to frame Chinese people as a security risk to the country, but groups supported by Western organizations change the game.

"If it's outside Western groups that are agitating using LGBT groups, then that can be framed as a national security risk, and then there are a whole host of other laws that can then apply," Kokas told the Morning Post.

She said Chinese media censorship has escalated within recent years across a wide range of causes and organizations zeroing in on anything that could pose a risk to national security.

Chinese foreign ministry spokesman Wang Wenbin disagreed with the experts and LGBTQ community's speculation of WeChat shutting down of LGBTQ accounts. He told the Morning Post that the government simply "manages the internet in accordance with the law."

State Department spokesman Ned Price, a gay man, said the U.S. was "concerned" during the July 7 daily press briefing when a reporter asked about the WeChat incident. He stated the LGBTQ student groups and NGOs were "merely expressing their views, exercising their right to freedom of expression and freedom of speech."

"We oppose the use of network restrictions to suppress freedom of expression online," Price said. "It does not matter to us whether that it is in China or anywhere else; we oppose it universally."