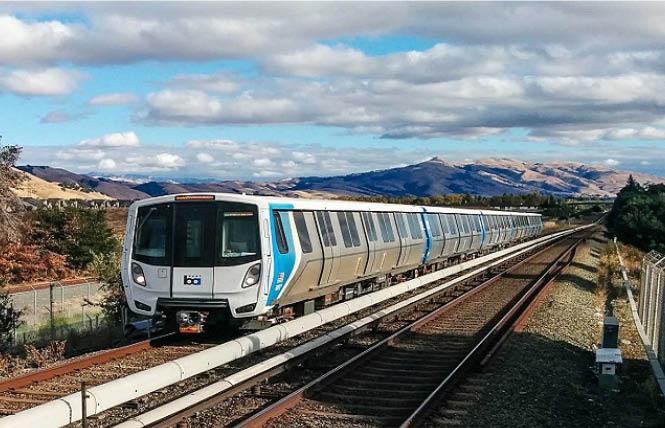 The transit agency will also run two sets of special trains after the San Francisco July 4 fireworks show, according to a news release.

For the Thursday-Saturday late-night service, those trains will leave Civic Center or Embarcadero stations at 11:30 p.m., giving people who work nights and those attending events and dining more options.

These limited trains will not stop at all stations. Four trains will leave Embarcadero or Civic Center at 11:30 p.m., BART stated in the release.

One train will take riders from Embarcadero and will stop at Civic Center, 16th Street Mission, and Daly City stations only. No other stops will be made along the line. This train will be labeled: Civic ctr-16th St-Daly City ONLY

A second train will stop at Civic Center and Embarcadero and will take riders to West Oakland, MacArthur, and Pleasant Hill only. No other stops will be made along the line. This train will be labeled: West Oak-MacArthur-Pleasant Hill ONLY

A third train will stop at Civic Center and Embarcadero and will take riders to West Oakland and Bay Fair only. No other stops will be made along the line. This train will be labeled: West Oakland-Bay Fair ONLY

Gay BART board director Bevan Dufty told the Bay Area Reporter that he was excited about this latest development and praised the transit district's labor unions and management for making it happen.

The release stated that BART was able to advance the schedule change by working collaboratively with its labor partners to accelerate the hiring, training, and shift sign-up process.

July 4 late-night service
With the Fourth of July holiday coming up, BART will also have additional trains to accommodate those watching the fireworks show in San Francisco. Fireworks are expected to start at 9:30 p.m. along the waterfront Sunday, July 4. People should be in the Embarcadero Station by 10:40 p.m. to catch a train home, according to the release.

Regular BART service will close at 9 p.m. But about 30 minutes after the conclusion of the fireworks, BART will run two sets of special event trains from the Embarcadero station to Richmond, Antioch, Berryessa, and SFO/Millbrae, making all station stops. Dublin/Pleasanton riders should take the Berryessa train and transfer at Bay Fair and take the shuttle train to Dublin/Pleasanton, which will stop at all stations along the line.

BART will operate on a normal weekday service schedule Monday, July 5. Parking will be free that day at all stations except Milpitas and Berryessa/North San Jose, which are operated by the Santa Clara Valley Transportation Authority, BART stated.

August service update
BART also announced that it will return to near-pre-pandemic service August 2 instead of August 30 as originally planned. The August 2 change includes extending closing times to midnight Monday through Saturday.

Saturday service will be 6 a.m. to midnight (currently 8 a.m. to 9 p.m.) with five-line service offering more options for Saturday riders, and for the first time, offering four trains per hour on most lines.

Sunday service will remain 8 a.m. to 9 p.m. with three-line service and 30-minute frequencies to accommodate BART's critical cable replacement project and other infrastructure rebuilding work, according to the release.

Two out women to lead BART board
Sign up!