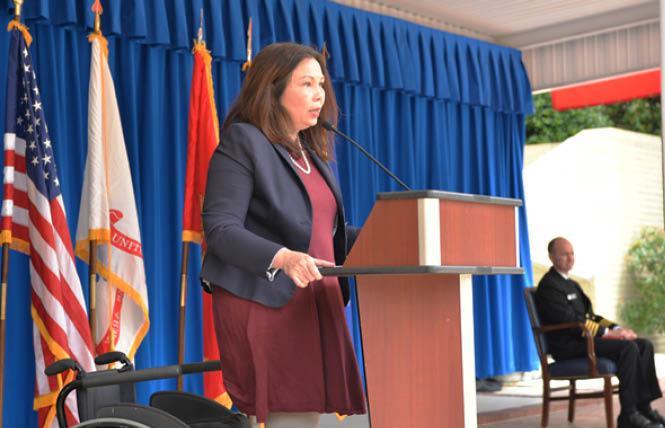 New guidance from Defense Secretary Mark Esper on flag displays at military installations is being hailed for prohibiting the display of Confederate flags — but the memo also bans the display of LGBTQ Pride flags, the Washington Blade has learned.

A Pentagon spokesperson affirmed Friday a read of the guidance — which excludes the display of flags other than the U.S. flag, state flags, and others listed — to prohibit LGBTQ Pride flags is "correct."

"The memorandum does not authorize public display of unlisted flags in the Department of Defense," Pentagon spokesperson Lisa Lawrence said in a statement.

The guidance issued Friday, July 17, by the Defense Department appears to get around President Donald Trump's hostility toward removing symbols of the Confederacy — which he has called part of U.S. "heritage" despite its connections to slavery, racism, and secession — by restricting the kinds of flags on military installations.

Permitted are the American flag; the flags of the U.S. states, territories and the District of Columbia; military flags; and those of allies. However, by not enumerating them, the memo effectively bans Confederate flags and LGBTQ Pride flags.

"The flags we fly must accord with the military imperatives of good order and discipline, treating all our people with dignity and respect, and rejecting divisive symbols," Esper writes in the memo.

The new memo could complicate annual celebrations of LGBTQ Pride Month at the Pentagon. Each year since "Don't Ask, Don't Tell" was lifted in 2011, the Pentagon has hosted an annual event in June for Pride Month recognizing the contributions of LGBTQ service members and civilian employees of the Defense Department. (The annual event was canceled this year, however, due to the coronavirus crisis.)

Rudy Coots, president of DOD Pride, the LGBTQ affinity group for service members and employees, objected to the policy on the basis that it would change Pride displays and events at the Pentagon.

"We were shocked to learn DOD's new policy on the public display of flags bans the rainbow Pride flag from DOD workplaces," Coots said. "Banning the rainbow Pride flag will have the opposite effect of the policy's intended purpose of improving morale, cohesion, and readiness. For LGBT soldiers, sailors, marines, airmen, and civilians protecting our nation each and every day, and their allies, the flag is a joyous symbol of hope, acceptance and accomplishment that should continue to be displayed proudly."

The memo states the flag guidance applies to "work places, common access areas, and public areas." Included in these categories are school houses, office buildings, naval vessels, break room and common areas in barracks, although individual rooms are not listed as places where the ban is in effect.

Per the new guidance, the ban applies to "public displays or depictions of flags by service members and civilian employees in all Department of Defense work places, common access areas, and public areas."

Asked whether the term "depictions of flags" applies to images of LGBTQ Pride flags on posters or the use of LGBTQ Pride colors, Lawrence repeated, "The memorandum does not authorize public display of unlisted flags in the Department of Defense."

Jennifer Dane, interim executive director for the Modern Military Association of America, told the Washington Blade the Pentagon is twisting an opportunity to ban the Confederate flag to achieve an anti-LGBTQ goal.

"It's absolutely outrageous that Defense Secretary Mark Esper would ban the Pride flag — the very symbol of inclusion and diversity," Dane said. "In what universe is it OK to turn an opportunity to ban a racist symbol like the Confederate flag into an opportunity to ban the symbol of diversity? This decision sends an alarming message to LGBTQ service members, their families and future recruits."

Dane said the Pentagon "must immediately reconsider and take swift and appropriate action to ensure the Pride flag and LGBTQ Pride Month observances are not threatened."

"If Secretary Esper refuses to reconsider, we call on members of Congress to take action," Dane concluded.

Will Goodwin, a gay Army veteran and government affairs director for the anti-Trump group VoteVets, also condemned conflating the Confederate flag with the Pride flag.

"It is patently offensive that Mark Esper has, along with the Confederate flag, declared the Pride flag to be 'divisive,'" Goodwin said. "The Pride flag celebrates the hard-fought rights of LGBTQ Americans, including many troops. To equate it with a symbol that represented a denial of human rights is disgusting and a slap in the face of those members of the community who serve, or seek to serve, in uniform."