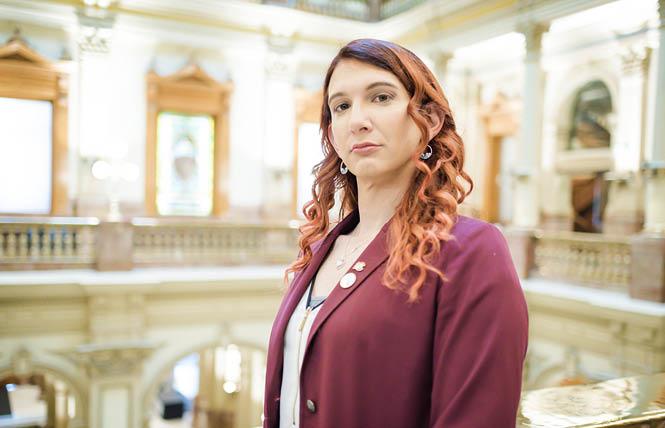 It has become a yearly ritual; Republican-controlled legislative chambers across the country pass anti-LGBT legislation, many attacking the rights of transgender youth and adults. If both houses of a state's legislature are in the hands of GOP majorities, the transphobic and homophobic bills are likely assured passage.

And if a state has a Republican governor in charge, then there is near certainty the anti-LGBT bills will be signed into law. Such was the case in late March when Idaho Governor Brad Little signed two bills that restrict the rights of his state's transgender citizens.

The best strategy for blocking the anti-LGBT legislative attempts, contend LGBT leaders and lawmakers, is to either have a Democrat occupy a state's governor's mansion or to have at least one of its legislative chambers be run by Democrats. According to the National Conference of State Legislatures, there are just 13 states with divided control between the two parties.

Republicans control the legislative process in 21 states, while Democrats have complete control in 15. (The conference's annual reports don't include Nebraska because its legislators are elected on a nonpartisan basis.)

With this in mind, and the upcoming redrawing of state legislative districts based on the results of the 2020 census, the LGBTQ Victory Fund is eying chances to flip statehouse chambers come November from the anti- to pro-equality column. On May 11 it announced the launch of its new Majorities Matter Fund, a political action committee that is raising money specifically for LGBTQ state legislative candidates who have a shot at either flipping their district or being reelected so that their chamber has a Democratic majority. (To date, none of its endorsed statehouse candidates are Republicans.)

"Here's the gist: in 2020, we're going to flip anti-equality legislatures across the country by electing LGBTQ candidates in key states and districts. Donate today and support the Majorities Matter Fund!" wrote Sean Meloy, the political group's senior political director since 2017, in an email announcing the fund's launch.

Meloy, a gay man who formerly worked for the Democratic National Committee, pointed to how the election of five LGBTQ state legislators last year in Virginia helped to end the GOP's stranglehold there on legislative matters. This year saw Virginia lawmakers pass a ban on conversion therapy, expand hate crimes laws to include gender identity and sexual orientation, and repeal a state-level ban on marriage equality.

"That's why we're committing — with your help — to bringing the rainbow wave to key swing seats," wrote Meloy in his emailed pitch for donations to the new fund.

In a phone interview with the Bay Area Reporter, Meloy said the goal is to seed the Majorities Matter Fund with more than $1 million to spend on behalf of the Victory Fund's endorsed candidates.

"The idea is our candidates are key to flipping these chambers," said Meloy. "These chambers are largely in states that score low on pro-equality LGBT laws. So there is still a lot of progress to be made on LGBT equality in those states."

Take for instance Pennsylvania, which landed among the states with the lowest possible ranking on the Human Rights Campaign's 2019 State Equality Index. Of the four categories the states were grouped into, the Keystone State was among those listed under "High Priority to Achieve Basic Equality" as it had the fewest pro-equality laws on its books.

It has a Democratic governor but GOP majorities in its state Assembly and Senate. The Victory Fund has thrown its support behind five out legislative candidates in the Mid-Atlantic state, whose primary election will be held June 2. Among the quintet are Brett Burman, a gay man running to be the first openly LGBTQ member of the Pennsylvania state Senate, and state House candidate Jessica Benham, a bisexual disability advocate who is autistic and would be the first out LGBTQ woman in the Legislature.

In Colorado, the Victory Fund is working to reelect state Representative Brianna Titone, who is running unopposed in the Democratic primary set for June 30. Her 2018 election to the Colorado House of Representatives marked the first time a transgender person had won a seat in the state Legislature. Her race this year is a rematch with Republican Vicki Pyne, who lost by just 439 votes two years ago and is unopposed in her party's primary next month.

Titone is facing a tough reelection fight, noted Meloy, as she is a top target for defeat by Republicans who are looking to chip away at the Democrats' majority in the chamber. (Democrat Jared Polis, a gay man, is the state's governor, and his party holds a majority in the state's Senate by three seats.)

"Majorities matter because without them, good policies sit in the queue for years collecting dust and not benefiting the people," Titone told the B.A.R. in an emailed reply. "In Colorado, we tried to help trans people change the requirements to change their birth certificate for years but couldn't pass it because we didn't have the majority. Same was true for the ban on conversion therapy. Once we flipped the Senate, we passed several great bills to make Colorado a more welcoming place for LGBTQ+ people."

With some states having postponed their primary elections due to the novel coronavirus outbreak, close to half of the Victory Fund's 209 endorsed candidates are facing primary contests in June or later this summer, said Meloy. Thus, it is still an open question just how many of the candidates will advance to their fall general elections and flip their targeted seats as well as potentially control of their statehouse chambers.

"We are still trying to really understand the full spectrum of opportunity in 2020. So many states delayed their primaries, we still don't have a full map of what the opportunities are," Meloy said. "Some of these folks have to win their primaries."

And campaigning during a health crisis has brought unexpected challenges for the candidates, who have been forced to curtail in-person events and pivot their ground games from knocking on voters' doors to calling people by phone and hosting virtual get-togethers with supporters.

"I would say that COVID has completely changed the game at this point. I think it makes it more difficult for candidates to fundraise from the top to the bottom of the ticket," said Meloy. "So that is going to have an impact on every single candidate running this year. The folks who are able to overcome that are the ones who will have a really good shot come November."

With the Victory Fund expecting to endorse more than 300 candidates across the country this year, which will be a record number, noted Meloy, it needs as many resources as it can raise to help support their campaigns. Due to the national group raising more than $1 million in 2018 for its endorsed candidates that year, Meloy is confident of surpassing that total this year.

"We have a lot of work to do. We have more LGBTQ people running in 2020 than ever before," he said. "The Victory Fund is endorsing more of them than we have ever before. We really need everyone to step up, not only to support our candidates but also this fund."

At 8:30 a.m. Pacific time Monday, May 18, the Victory Fund will be broadcasting a virtual talk via its Facebook page that is focused on its campaign to flip control of state legislative chambers this year. Taking part in the conversation will be its President and CEO Annise Parker, lesbian Texas state Representative Celia Israel, and Jessica Post, president of the Democratic Legislative Campaign Committee.

And at noon Pacific time Tuesday, May 19, the organization will host a special online talk specifically about the chance for Democrats to flip the Pennsylvania Legislature this year. Gay state Representatives Malcolm Kenyatta and Brian Sims, who are both seeking reelection in November, will join Benham in conversation with Meloy about the state's electoral landscape in 2020.

To watch both talks, go to https://www.facebook.com/victoryfund/

Due to the Memorial Day holiday, the Political Notes column will return Monday, June 1.