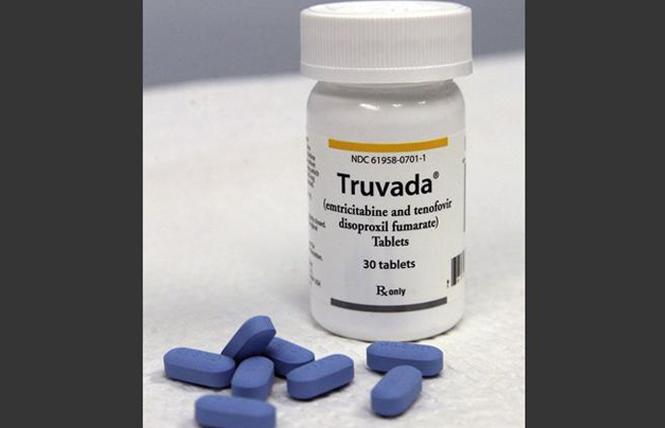 Gilead Sciences said it would donate millions of bottles of Truvada to the CDC.

Gilead Sciences announced last week it will donate millions of free bottles of Truvada for PrEP to the Centers for Disease Control and Prevention, but many AIDS activists say it is not enough.

In a May 9 news release, the Foster City-based company said it would provide up to 2.4 million free bottles annually to uninsured Americans at risk for HIV. Studies continue to show that PrEP is very effective at preventing HIV if taken as prescribed.

Gilead said the donations will extend to 2030. It's enough to supply 200,000 patients annually for up to 11 years, according to federal officials.

The donation of Truvada for PrEP (tenofovir disiproxil fumarate/emtricitabine) will transition to the new Gilead drug Descovy (emtricitabine and tenofovir alafenamide) if it is approved by the U.S. Food and Drug Administration.

It was recently reported that the CDC holds the patent for Truvada. While Gilead holds patents on the Truvada coformulation — due to expire in 2021 — and its two component drugs, advocates found that the U.S. government separately patented use of the pill for PrEP, an indication approved in 2012.

Last month, the Washington Post reported that the Justice Department has launched a review of a government patent for use of the drug.

AIDS activists were not impressed by Gilead's free PrEP announcement. Mark S. King, the author of My Fabulous Disease blog and a gay, HIV-positive man, posted last week that the deal is "a steaming pile of Truvada."

"It cost Gilead pennies to make Truvada. They charge $20,000 a year," King wrote. "If Gilead really wanted to end this epidemic — and make no mistake, they have the ability to fundamentally alter the trajectory of HIV in the United States — then they would lower the price of Truvada across the board, for everyone. And by lower, I mean by a lot."

King also pointed out that people with insurance also need PrEP, and many still face barriers to obtaining the medication.

And, he wrote, Gilead is phasing out Truvada to make way for the new drug, Descovy. King argued that by making the free Truvada available to uninsured people, it's creating a new customer base for Descovy, which will also cost $20,000 a year once it's approved.

Gilead submitted a new drug application for Descovy for PrEP to the FDA April 5. The company submitted a priority review voucher with the filing, which could reduce the review time to six months.

According to Gilead's news release, approximately 200,000 of the 1.1 million people at risk for HIV receive PrEP. Many who need PrEP do not receive it due to the social stigma still associated with HIV, homophobia, and a lack of awareness of PrEP among patients and doctors, as well as a general lack of access to health care.

Gilead's donations will greatly increase the number of at risk and infected individuals who will be given access to PrEP, the company said, as well as to develop programs in which state and local governments are able to implement protocols so that uninsured at risk patients are able to receive PrEP at no cost.

"We are proud to partner with CDC to dramatically expand access to medication that can help prevent new HIV infections," Gregg Alton, chief patent officer of Gilead, said in a statement. "We believe today's donation, combined with efforts to address the root causes of the epidemic, such as racism, violence against women, stigma, homophobia, and transphobia, can play an important role in ending the HIV epidemic in the United States, particularly in parts of the country with the highest burden of disease."

The company noted in its release that following five years of declines, the annual number of new HIV diagnoses has remained stable in the U.S. since 2013. During 2016 and 2017, half of new diagnoses concentrated in 48 "hotspot" counties as well as Washington, D.C. and Puerto Rico, Gilead stated.

Gilead has long-standing patient support programs to help at-risk individuals have access to PrEP. Those with commercial insurance may be able to take advantage of the company's copay coupon support, through which they may receive Truvada free of charge. Those without insurance may be able to receive PrEP free of charge through Gilead's Medication Assistance Program.

Gilead officials did not respond to multiple requests for comment from the Bay Area Reporter.