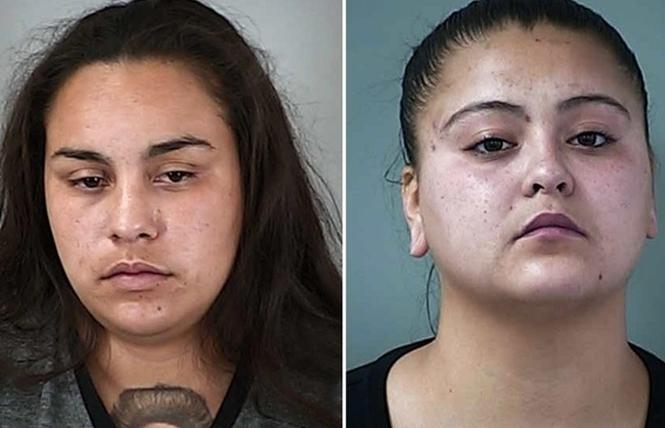 A lesbian couple has been charged with felony assault following an incident in which the women allegedly stabbed three men in an early morning brawl outside of a Morgan Hill bar earlier this month.

The couple, Tori Sanchez, 22, and Alexandria Campos, 23, were arrested after allegedly stabbing three unidentified men in a back alley near Monterey Road and Third Street in Morgan Hill.

Police responded to the incident at about 2:15 a.m. July 7, reported the Morgan Hill Times.

Sanchez, of Freedom, and Campos, of Morgan Hill, were charged with three felony counts of assault with a deadly weapon with two enhancements of great bodily injury during their arraignment, said Benjamin Rada of the public affairs office at the Santa Clara County Superior Court.

Santa Clara County Deputy Public Defender Micael Estremera argued that this was the first time the two women have been in trouble with the law. He argued for Campos and Sanchez to be released from custody under supervision while awaiting further court proceedings.

Santa Clara County Deputy District Attorney Phong Banh disagreed. He argued setting the two women's bail at $175,000 each "based on the vicious nature of the attacks," reported the Times.

Judge Edward Lee agreed and set the bail for the requested amount.

Deputy Public Defender Jennifer Redding, who is now representing Campos, told the Bay Area Reporter that she hopes to have new information to present to the court August 13 when she requests that Campos be released on supervised order, on her own recognizance, or at a reduced bail.

"I think that she should be released on supervised order of release or on her own recognizance," said Redding who has filed a motion to review the bail.

"The family can't afford it," she said. "I don't believe that this current bail is something that Miss Campos can afford."

Defense attorney Al Lopez, who is now representing Sanchez, didn't respond to a request for comment by press time.

Self-defense claim
Campos and Sanchez are claiming self-defense after the men continuously hit on them even after informing them that they were a "romantic couple" and asked to be left alone. The men allegedly followed them from one bar to another, according to media reports.

The women were hanging out at the Hill Bar and Grill in downtown Morgan Hill when the three men - one of whom Sanchez knew from high school - were "harassing ... touching, groping, and flirting" with them, she told police in the incident report, reported the Times.

Campos and Sanchez moved onto another bar, M&H Tavern, across the street from the Hill. The unidentified men followed them and "continued to harass them," Sanchez told the police.

The men told police they were friends and had been drinking all night at bars from San Jose to Morgan Hill.

Both parties stayed at the bar until it closed and then walked out to the back alley, where things turned violent.

"I was terrified [for] my life," Sanchez said, according to the police reports, the paper reported.

Sanchez, who is a private security guard, informed the police that the knife belonged to her. She told them that she often carries a knife in her back pocket, but had not intended to use it that night.

Neither party was clear about their accounts of how the knife became used in the fight or how it got bloody. Sanchez told police that one of the men grabbed the blade from her pocket and opened it. A struggle for the knife ensued. When the knife fell to the ground it was covered in blood. Sanchez picked up the knife and walked away with Campos.

One of the victims told the police that while the group was hanging out behind the tavern the "conversation started to deteriorate," but he didn't know why. The situation led to a physical confrontation and the stabbing, according to police reports.

The men claim that they didn't have any problems with the women earlier in the evening.

Sorting out the details
Morgan Hill police Sergeant Troy Hoefling doesn't quite believe the women's claim of self-defense, but he's leaving it for the courts to decide.

"That's a matter for the court as what her defense might be. But it didn't appear that way from the evidence we have at this point," Hoefling told KSBW8.

Police followed trails of blood after being called to the scene to find the victims with their clothes soaked in blood. Their injuries ranged in severity from a cut to one victim's lower back and forearm to two victims sustaining serious injuries to their groin area and abdomen, respectively. The victim with the groin area injury was found with his intestines hanging out. The second victim was stabbed in the abdomen and had blood filling his lungs by the time he made it to the hospital, the newspaper reported, citing the police report.

All three men were rushed to San Jose Regional Hospital where they were treated. Two of the men were released July 16, reported the Times. It's unclear if the third victim was released. All three victims are expected to survive.

Police later found Campos and Sanchez near Monterey Road and Dunne Avenue. Both women had blood on their hands and clothes. Sanchez had the bloody knife wrapped in a latex glove in her pocket, the newspaper reported, citing the report.

The man who knew Sanchez from high school identified Campos to police as the woman who stabbed him. Campos admitted to police she stabbed one of the men, but only after he stabbed her in the chest.

However, Campos didn't exhibit any wounds beyond a cut on her hand, which she told police was a result of one of the men stabbing her, the newspaper reported, quoting the report. The police report described Campos' cut as "self-inflicted" in the process of stabbing another person, reported the Times. She was treated at a nearby hospital.

The suspects' friends and family members are standing by them. More than a dozen of them attended the July 11 arraignment and believe the women were acting in self-defense, reported the newspaper.

The women are expected back in court to enter their pleas August 17.