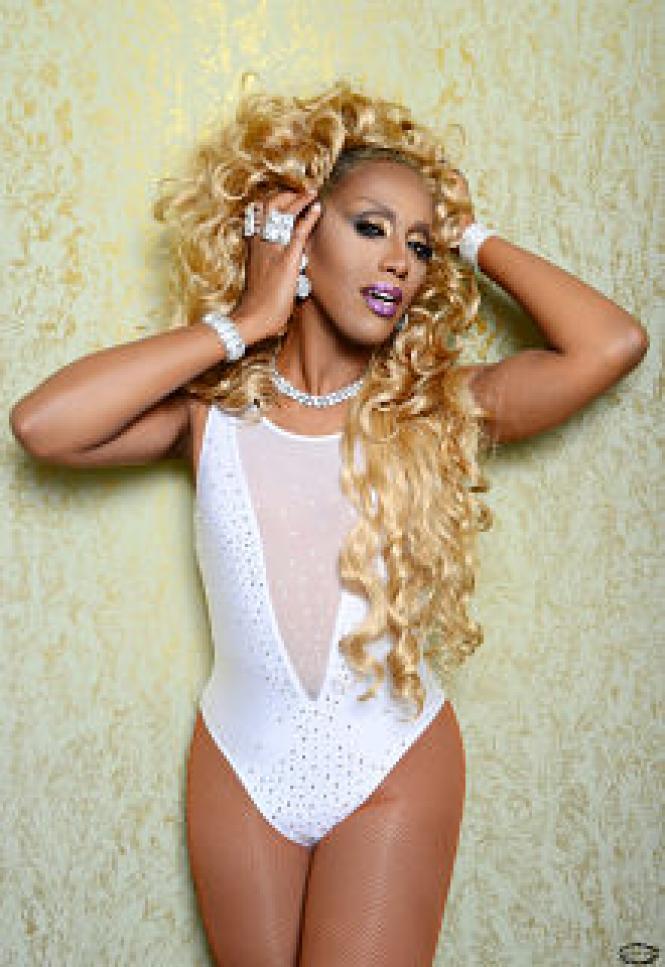 It seems as though Honey Mahogany is everywhere these days. The season 5 "RuPaul's Drag Race" contestant has released an album, and recently played herself on the fourth episode of HBO's gay series "Looking." She'll soon be appearing at the hot Market Street nightspot Martuni's.

When speaking with Mahogany, her gentle demeanor stands out. Honey Mahogany has a lot of heart, and wants to spread the love around. "Just because you're a drag queen doesn't mean you have to be a cunt," she said with a laugh.

Her compassion and love for others may have been nurtured by her day job. When not singing her heart out while clad in stunning gowns, Mahogany becomes Alpha Mulugeta, her boy persona. He does social work in Contra Costa County. Mulugeta works with LGBT youth, people with HIV, the homeless and other at-risk populations. He's very passionate about that work, which he brings to the table when he transforms into Honey.

"Honey started as an extension of myself," she told BARtab. "I identify as male and prefer Queer. Honey is an extension of the inner femininity that society said I could not be. Honey became a celebration of that femininity. People tell me that I'm so genuine on stage, that I'm a beautiful person inside and out. People get that energy from me."

"Everyone feels that in order to be fierce you have to be catty," she said. "Catfights get them ratings. My mindset was that I was going to let my talent speak for itself. I don't want to be remembered for being catty."

The line between Alpha and Honey is a thin one. "There's not been a huge distinction between Honey and my boy persona, but now it's growing," she said. "Honey is extremely extroverted, she's there to entertain people."

Her talent is indeed winning out. "Honey Love," her newly released CD, has been getting positive notices. The album features a mix of original compositions and covers. "Feeling Good," a Nina Simone classic, was released as a music video this past November. The website NewNowNext proclaimed that Simone would have been proud of Mahogany's version.

"I made an album from my heart," Mahogany said. "It's music that's true to my life experiences. It's more of an acoustic album."

She describes "Feeling Good" as "a song of struggling through and surviving, a song of living through grit, but still finding life beautiful."

"It's a song about my first romantic relationship," she said. "I shoulda known better! It's exciting that it got picked up by HBO."

For the future, Mahogany hopes to pursue other show business avenues.

"I would like to do it all," she said. "I'd like to pursue modeling as Honey or as a gender-variant model. I'm interested in a musical career, I love writing and recording, and I think I have decent acting chops. Because of Drag Race, people take drag queens more seriously now."

Mahogany hopes that Drag Race fans will join her and pal Sister Roma at The Midnight Sun every Monday night for funtastic Drag Race viewing parties, which also include live performances.

And please join her at Martuni's, 4 Valencia Street at Market, on Sunday, February 23 at 7 P.M. for a Honey Love CD release party.

"I'll be singing with a live band," she tells us.