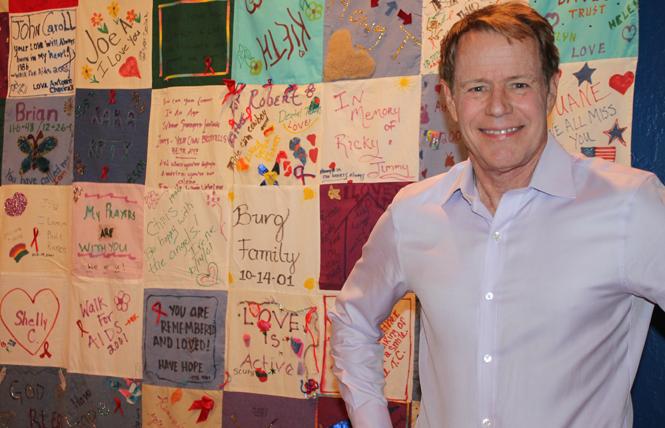 Ken Yeager stands in front of an AIDS quilt panel on display at the "Coming Out: 50 Years of Queer Resistance and Resilience in Silicon Valley" exhibit at History San Jose. Photo: Heather Cassell

To visitors of all ages, sexualities, and identities, the one comment I hear the most when I'm a docent at the new South Bay queer museum exhibit is, "I didn't know any of this."

Each time I hear that, it fills my heart knowing they had the opportunity to learn.

As an LGBTQ activist and elected official in the San Jose area for almost 40 years, I was concerned that much of the queer history in Silicon Valley could easily be forgotten. My vision was to curate an exhibit showcasing our vibrant suburban community, separate from the Castro in San Francisco and Greenwich Village in New York City.

That became a reality when the organization I lead — the BAYMEC Community Foundation — received a generous grant from the County of Santa Clara to create the exhibit at History San Jose called, "Coming Out: 50 Years of Queer Resistance and Resilience in Silicon Valley."

One of the reasons that a museum exhibit creates a more personal and emotional response than a website or documentary is because it encourages a visceral response from the viewer. Witnessing tragedies and struggles, contrasted with victories and celebrations, instills a sense of gratefulness and pride for all the progress made. I've seen people almost be physically frozen when a flood of memories overwhelmed them to the point they can't speak or move.

From the moment you walk into the lobby of the gallery, gay pageantry is in full view. Front and center on a raised platform are a gown worn in the 1980s by local drag queen Lady Shockra and a leather outfit from a Mr. San Jose Gay Leather contest. Many visitors might be aware of these types of events in San Francisco but taken aback they happened in San Jose, too.

What I really like about the display, though, is the third piece: a colorful Ensamble Folclorico Colibiri Jalisco dress designed by Arturo Magana that is unique to San Jose's Mexican gay culture. Together, the three outfits tell what the exhibit is all about: That while some events in South Bay were a reflection of what was occurring in the greater queer culture, we added our unique style to make it our own. "We're here, we're queer, we're San Jose!"

In today's world where we only know how to communicate to others mainly through social media, there was a time when the only way that queer people got their news was from the gay press. Off to the bars people went, to drink, to socialize, and to read the latest local gay news in Out Now, Your Paper/Our Paper, Entre Nous, South Bay Times. In all, there are seven publications displayed in a large case for people to either remember or learn about for the first time.

Without a queer hub filled with shops and bars, meeting people in the suburbs proved challenging. In the South Bay, cultural clubs and organizations filled that void. Many of those groups are included throughout the exhibit. Their meetings, barbecues, sports events, fundraisers, theater performances, along with the lesbian bookstore Sisterspirit and Billy DeFrank LGBTQ Community Center, were how people met outside of the bars.

Which isn't to say the bars weren't filled on Friday and Saturday nights. People are surprised to learn that at one point there were 14 LGBTQ bars in the South Bay. Now there are only three.

Gay Pride festivals and parades were just as important in the South Bay but certainly on a smaller scale. In 1971, two years after Stonewall, over 100 LGBTQ people and their allies held a rally in San Jose's St. James Park. You can even see the flyer advertising that on June 26, 1976, the first official Gay Freedom Day Rally and Dance took place.

A significant section of the exhibit is dedicated to the impact of HIV/AIDS pandemic and the 2,500 lives that were stolen from us locally. A large quilt hangs with words written on patches of cloth by loved ones at a Walk for AIDS event. The exhibit panel tells the story of the local organizations formed to provide social services to AIDS patients, and the South Bay effort to defeat the 1986 AIDS quarantine initiative. It ends with words about the Getting to Zero campaign to greatly reduce HIV transmission and hopes for the day that HIV/AIDS is eradicated.

After collecting yourself, you can hiss as loud as you want at an Anita Bryant Time magazine cover — Bryant was an anti-gay crusader in the 1970s. You can see the No on 6/Briggs initiative poster (the measure banning gay teachers in California public schools was rejected by voters), and a mail piece opposing two local anti-discrimination ordinances in San Jose and Santa Clara County in 1980. To the disbelief of most, the ordinances were overturned by nearly a 3 to 1 margin, all but squashing the local gay rights movement for at least a decade.

Stories about South Bay transgender people from the early 1990s to today are told. As a sign of recent progress made, the new, comprehensive county trans health center makes it unnecessary for people to travel elsewhere for care.

The exhibit ends with the joy of marriage equality, the raising of the rainbow flag, and the widening acceptance of the LGBTQ community in Silicon Valley. On your way out, be sure not to trip over the lawn signs of some LGBTQ candidates who ran and won public office as you take the lessons of our past into our present and future.

"Coming Out: 50 Years of Queer Resistance and Resilience in Silicon Valley" runs through June 2022 at History San Jose, 635 Phelan Avenue in San Jose. Hours are noon to 4 p.m. Saturdays and Sundays. Go to https://historysanjose.org/ for more information.