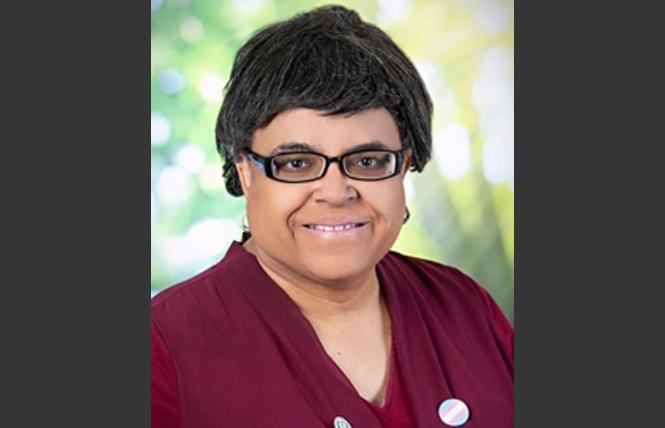 The Democratic National Committee's decision to scrap a Black trans woman as an at-large member of the DNC was disheartening and confusing to many, more so because it was tone deaf to calls for diversity and equitable representation. Marisa Richmond, Ph.D., wrote on her Facebook page October 3 that she received news that she will not be reappointed — her last meeting is this Saturday. She was the first Black trans woman who was a member of the DNC.

Richmond lives in Nashville, Tennessee, a ruby red state with an atrocious record on LGBTQ rights. (It's one of 18 states that is on California and San Francisco's no-fly lists for taxpayer-funded travel because of its anti-LGBTQ laws.) In addition to her qualifications, that's all the more reason to have someone like Richmond on the DNC. She served for four years working for change, and now she — and by extension Black trans people — will no longer have a direct voice in the senior levels of party leadership to provide her unique perspective. That's a shame.

That is not to say the DNC will be lacking in trans members, just trans people of color. "The transgender community will still be represented by Michelle Risher of Oregon, who will be joined by newly appointed at-large member [state] Senator Sarah McBride of Delaware," Richmond wrote. "I love them both dearly and I know they will work hard to represent transgender interests, but with Black and Brown trans people being targeted for hate crimes around this country, and with so many racist and transphobic laws being pushed by the other party, having a trans person of color on the DNC sent a powerful message of inclusion and diversity.

"I was extremely disappointed because it means that one of the most marginalized groups will no longer have a direct voice in the senior levels of party leadership," she added.

We're disappointed too. The DNC, which is led by Jaime Harrison, a Black man, needs more people of color at all levels of the organization, particularly LGBTQ people of color, with an emphasis on the T. We hope that DNC leadership won't wait four years before appointing another trans person of color as an at-large member. Biden and Harrison have the power to nominate the at-large members of the DNC, of which Richmond was heretofore one. We know that McBride is close to President Joe Biden — she worked for his late son, Beau, and the elder Biden wrote the forward for her book — and it is his party now, but the optics of not reappointing a trans woman of color are a bad look for a party that prides itself on inclusiveness. It's a loss for the DNC, and for all Democrats.