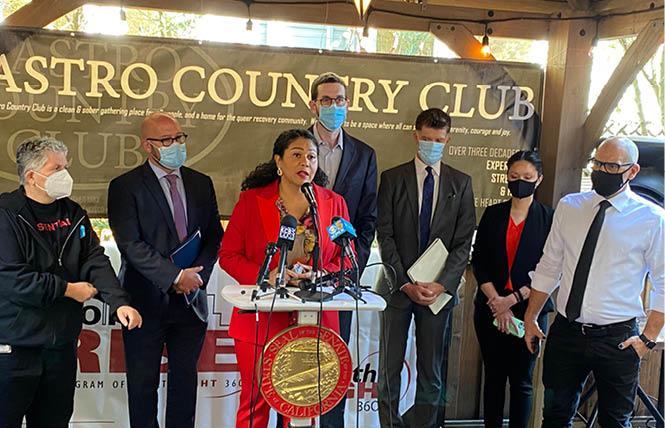 Introduced by the San Francisco Democrat, SB 110 would expressly legalize contingency management as a way to treat substance use disorder, and authorizes Medi-Cal to cover it. Contingency management — which offers incentives, including financial incentives, for staying sober — is already used by the Veterans Affairs Administration and the San Francisco AIDS Foundation, and is a proven and effective way to help people overcome addiction to stimulant drugs like methamphetamine, multiple speakers said.

As the Bay Area Reporter previously reported, San Francisco made international headlines for having more drug overdose deaths (657) than COVID-19 deaths (257) in 2020. Wiener said that because "meth does not have a pharmaceutical treatment to help people get sober," innovative solutions have to be tried. About 60% of drug overdoses in San Francisco in 2019 were methamphetamine-related.

"[Contingency management] has proven results to help people use less or stop using entirely," Wiener said. "I authored Senate Bill 110, which is sitting on the governor's desk, and we are calling on Governor Newsom to sign Senate Bill 110."

Wiener was joined at the event by Mayor London Breed; gay District 8 Supervisor Rafael Mandelman, who represents the Castro on the board; gay Director of Health Dr. Grant Colfax; Billy Lemon, a gay man who is the executive director of the Castro Country Club; Vitka Eisen, a lesbian who is the CEO of HealthRIGHT 360, which is providing staff for the city's South of Market RISE drug sobering center, scheduled to open this winter; and Tami Martin, the legislative director of Equality California.

Breed agreed that SB 110 is "a very innovative way" to address the drug overdose crisis, which she said is personal for her.

"We can't make it disappear because we don't want to see it," Breed said. "These are people. These are friends and family."

Breed noncommittal on state of emergency
After everyone spoke, Breed was asked how she felt about District 6 Supervisor Matt Haney's push for her to declare a state of emergency around the drug overdose epidemic. As the B.A.R. previously reported, Haney introduced a resolution earlier this month calling on Breed to declare a state of emergency for the drug overdose epidemic (as she did for COVID-19 in February 2020 — before a single case had been diagnosed in San Francisco). A hearing has yet to be scheduled on Haney's proposal.

Haney — who represents the Tenderloin and South of Market neighborhoods, which have among the highest drug overdose rates in the city — introduced that resolution after Gary McCoy, a gay man who is director of policy and public affairs for HealthRIGHT 360 and overcame a methamphetamine addiction about 10 years ago, held a three-day hunger strike outside of City Hall demanding action.

If Breed — whom McCoy had worked for when she was a supervisor — declared a state of emergency, the city could authorize safe consumption sites "on city property with staff, protected by the city attorney should the state or federal governments try to stop it," McCoy previously told the B.A.R.

Breed was noncommittal Tuesday, but criticized the idea of the city authorizing safe consumption sites without changes to the law.

Instead, because staff who participate in safe consumption sites may have their professional licenses impacted under current rules, Breed advocated for a legislative solution in the form of Wiener's SB 57, which the state senator said will be taken up by the Legislature again in January. Similar legislation was vetoed by then-Governor Jerry Brown (D), and was held by an Assembly committee this year, but Wiener is more hopeful about the prospects for Newsom's signature in 2022.

When asked if she'd sign the local emergency legislation when it gets to her desk, Breed said she couldn't answer yet.

"I have not had the chance to review the resolution," she said.

When asked for his response by the B.A.R., McCoy was optimistic.

"Given the potential legalities Mayor Breed would contend with to move forward with safe consumption sites, I wouldn't expect her to show her hand too soon on this," McCoy stated. "She's been a champion on these sites for many years and leading the way locally on overdose prevention programs during a crisis that's impacting the entire country — I'm confident she'll continue to do so, and I'm hopeful she can move these sites to implementation with the full support of our city family behind her."

Haney is appreciative Breed did not totally slam the door to the idea.

"I appreciate that declaring a state of emergency on the drug crisis is something the mayor is considering," Haney stated. "She has my full support on it, and I stand ready to assist in any way. There is massive urgency to use every possible tool we have to save lives from drug overdoses. Our hearing in October will only further demonstrate how important and necessary this is to declare an emergency."

His office did not return a request for comment, however, about the exact date of that meeting.

"I'm so proud our top recommendations from the meth task force are taking shape and being implemented," Colfax said. "SOMA RISE will bring people indoors, where they can have a safe space to rest, to calm down and be connected to services."

SOMA RISE, which is a sobering center for all drugs not just methamphetamine, is located at 1076 Howard Street. It has a 20-bed capacity and will open later this fall. HealthRIGHT 360 was awarded the contract to run the center.

Eisen said that while contingency management might seem odd at first glance, "I am grateful to live in a city and county that believes in science."

Mandelman said that Wiener's SB 110 would fulfill the No. 6 recommendation of the methamphetamine task force. He reminded the attendees that methamphetamine use is very much a queer issue, too.

Mandelman said that at the time of the task force "the prototypical meth overdose death was a gay, white man in his late 40s. ... It is a challenge for the queer community and it's a challenge for a lot of communities."

Newsom's office did not respond to a request for comment.

As of June 30, there were 344 additional accidental overdose deaths in the city, meaning the number of deaths this year is on track to be about the same as last year.

Changes may come to mask mandate
Breed left just as members of the press began to ask Colfax about the city's indoor mask mandate. The mayor received national scorn after singing and dancing maskless at a Tenderloin nightclub earlier this month in spite of re-introducing indoor mask rules last month, as the B.A.R. reported at the time.

Colfax was vague and noncommittal. He said that the city hopes to rescind the mandate at some point but did not give specific criteria of when that would be or what specifically would trigger that.

"The indoor mask mandate is still in effect," Colfax reminded attendees. "We're figuring out if there may be flexibility."

When asked what criteria health officials should use to determine if the mask mandate should stay or go, Colfax answered it should be based on "a combination of factors" like vaccination rates (the city sits at 82% of eligible people being vaccinated) and case rates.

Updated, 10/1/21: This article was updated to clarify that the SOMA Rise center is scheduled to open this winter.